Reflections on the Cedar Creek Room

On January 19, the Federal District Court in Brattleboro, Vt., issued a court decision in favor of Entergy Corporation, regarding the continued operation of its Vermont Yankee nuclear power plant. Entergy had sued the State of Vermont on several issues, but mainly on Act 160, a Vermont law that was crafted to block the continued operation of the plant. The plant needs a Certificate of Public Good (CPG) from the state in order to keep operating, but Act 160 says that the state's Public Service Board needs legislative approval before it could release its findings on the application for the CPG. Without the new CPG, the plant would have had to shut down when the original one expires, on March 21, 2012. The federal court's decision "permanently enjoined" the state from using Act 160 to deny a CPG to Entergy; the basis for that decision is the supremacy of federal law over state law.

Supporters of the law that was struck down have raised the the issue of "states rights." They assert that the state has the right to rule on the plant's safety, even if the federal government has already ruled. The Nuclear Regulatory Commission has exclusive jurisdiction over nuclear radiological safety, by law, as affirmed by prior court cases. But the supporters further argue that only some members of Vermont's legislature have spoken of safety, and that in fact Act 160 is based on energy policy and economics.  Yet a review of the federal court's decision by law professors has pointed out that the state did not introduce any evidence that the law had any other basis than safety.

The Cedar Creek Room is the reception room in Vermont's state capitol building, across the hall from the governor's ceremonial office. It should be a reminder that the Civil War settled the issue of states rights. Press conferences and many other events are held in the Cedar Creek Room. One wall displays a mural-sized painting of the battle that gives the room its name. The battle was a turning point in the Civil War, by ending Confederate effectiveness in the Shenandoah Valley. Vermont units were prominent in the Union forces at that battle, and five of the 21 Medals of Honor awarded for the engagement went to Vermonters.  Vermont's participation in the battle was a continuation of the strong abolitionist sentiment inVermont, and of its proud participation in the Underground Railway to Canada. Vermonters are justly proud of their heritage. 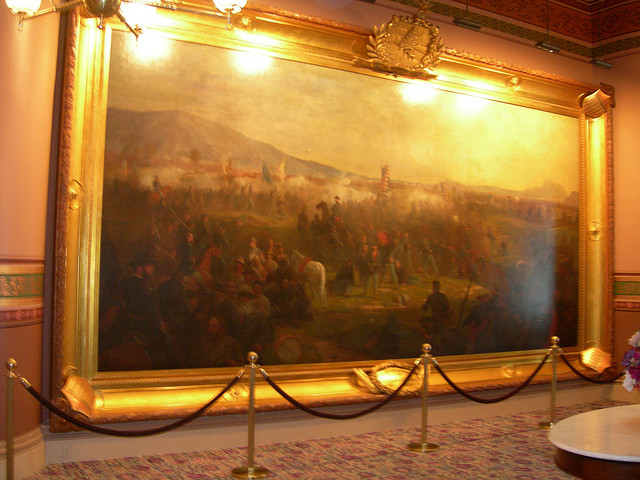 Meanwhile, some parts of political history are being repeated. Taking extreme positions can win elections, even though the positions do not get enacted. For example, the late Governor Orville Faubus of Arkansas ran as a moderate on segregation. In 1957, in an apparently politically motivated move, he used the Arkansas National Guard to prevent integration of Little Rock High School. President Eisenhower federalized the Guard and sent them away. Eisenhower then sent in the 101st Airborne Division to protect the students.

In Alabama, George C. Wallace ran for governor as moderate  and lost. He vowed never to lose again, became a staunch segregationist-and won. In 1963, he  "stood in the school house door" at the University of Alabama to block integration, by this action asserting states rights. He backed down to federal marshals and the National Guard.

Vermont's Governor Peter Shumlin lost the lieutenant governor's race in 2002, when a Progressive candidate split the vote. For his 2010 run for governor, Shumlin wanted to be sure that no Progressive ran against him. According to political commentators, Shumlin agreed to run on a platform of shutting down Vermont Yankee if the Progressive candidate would not run. Political pundits say that 14 percent of Shumlin's vote was  from the anti-nuclear block. He won by one percent. The plant's opponents are talking about mass non-violent civil disobedience, and holding training for it. Will the court have to enjoin the protesters? Will the federal government have to remove them? Meanwhile, Shumlin is sitting in the governor's chair.

In the 1980s, in another example of federal versus state authority over nuclear power, Massachusetts sued the NRC over its regulations concerning the bordering Seabrook plant in New Hampshire. Massachusetts appealed up to the Supreme Court and lost. The Massachusetts governor was against the plant, and the appeal appeared to his anti-nuclear constituents that he had done all he could. Vermont is expected to appeal all the way for the same reason.

The federal court has made it clear that the NRC has sole regulation of nuclear power plant radiation safety, and that the states have authority on reliability, rates, the environment, esthetics, and the "public good."

In addition, states share regulatory authority with the federal government in many areas, including nuclear matters, and have the right to do so.

In Vermont, the Department of Health takes measurements and samples around the Vermont Yankee plant, and reports results. It inspects and oversees radiation safety in facilities other than power plants. The state has set a lower limit than the NRC's for the annual fence line dose.

The Agency for Natural Resources issues permits for water quality, under the federal Clean Water Act.

Those talking about "states rights" don't seem to notice that regulatory power is being shared. Perhaps they have forgotten what the Civil War settled, even as they pass by the picture in the Cedar Creek Room.

Entergy has petitioned the Public Service Board to act on its application for a new or renewed CPG. Now the Vermont Yankee battle moves to a quasi- judicial venue, with the same politics and the same opponents. This time, however, a ruling from a federal judge makes it clear what can and cannot be heard as evidence. The plant is a big step closer to continued operation, but is not there yet.