Nothing in life is to be feared.  It is only to be understood.  ~Marie Curie

Perhaps it is instinctual to be afraid of that which we don't understand. Some of the most difficult aspects of our world to understand are the things we cannot easily comprehend or predict-weather, disease, even the stock market! Despite modeling, tracking, and analysis, our contemporary lives are still filled with unknowns.

Of course, throughout human existence we have overcome our fears, and faced many fundamental invisible forces with curiosity. This has allowed us to understand and benefit from their unseen power, such as gravity and magnetism. The discovery and research of these forces has led to advancements in our understanding of physics, and ultimately to real-life applications such as electricity and modern medicine.

So, in this post, I am going to attempt to address two invisible forces that I believe need to be embraced by the public with inquisitiveness, respect, and, ultimately, action: carbon and radiation. Of course, these two invisible forces are fundamentally different from a scientific perspective (one is a basic element, the other a release of energy), but they share some common traits in that they are both byproducts of electricity production, both invisible, and both potentially dangerous to human health.

Come to think of it, these are the issues that got me interested in nuclear energy to begin with-the invisible and sometimes scary forces.

So here we go, let's start with climate change and environmental carbon. 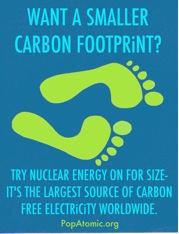 There is an incredibly strong consensus (about 97 percent of climate scientists agree, but not so much the everyday citizens) that we should not only be concerned about the effects of atmospheric carbon, but also should be taking steps to reduce carbon emissions now. In the past six months, several updates to the Intergovernmental Panel on Climate Change report have been released, concluding that the rates of Arctic ice melt and temperature change are faster than was previously predicted.

This is a really big problem. We cannot see, smell, taste, or touch carbon dioxide, but we can measure and monitor its impact on our ecosystem. There is abundant evidence of the damage it is doing, but we continue to collectively make this problem worse, day in and day out, by burning more and more fossil fuels. 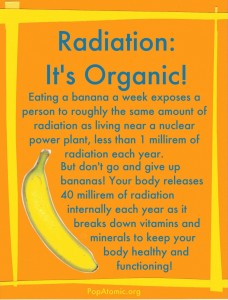 Like carbon, radiation also eludes the senses and is actually a natural, relatively harmless entity. The dangerous thing is that we humans have managed to concentrate both carbon and radiation in our attempt to improve our quality of life through the use of electricity. With carbon, the concentrations are happening in our atmosphere, in a way that is basically out of our control. With radiation, we have managed to safely contain and control it, and have become very good at containing this byproduct, and often use it for good in food irradiation and nuclear medicine.

Man-made radiation is easily and safely contained. Uncontrolled CO2 emissions are not.

In sum, this is certainly a simplification of the issues we face in moving forward with clean energy, but in many ways it really boils down to one question: Which invisible force should we fear more? And perhaps an even better answer: Instead of fearing these forces, let's do our best to understand them, and take action to protect our planet and ourselves as soon as possible.

Suzy Hobbs Baker is the executive director of PopAtomic Studios, a non-profit organization dedicated to using the power of visual and liberal arts to enrich the discussion on nuclear energy. Baker is an ANS member and a frequent contributor to ANS Nuclear Cafe.