Entergy and the state of Vermont are locked in a lawsuit regarding the Vermont Yankee nuclear power plant. Opponents and  supporters of Vermont Yankee both have tried to influence legislators to see their points of view by writing letters to the editors, lobbying, and (in the case of opponents) demonstrating and holding rallies. Now that there is the case in the courts over keeping Vermont Yankee operating, how have the tactics changed? First, we must understand the situation.

Entergy bought Vermont Yankee in 2002 and signed a Memorandum of Understanding, under which Entergy agreed that it would require a Certificate of Public Good from the state's Public Service Board to continue operating the plant past 2012. Then, in 2006, the Vermont legislature passed Act 160, which gave the state a right to refuse to allow Vermont Yankee to operate (even though, subsequently in March of this year, the plant received its 20-year license extension from the Nuclear Regulatory Commission). The state's stance toward the plant is the subject of a lawsuit filed by Entergy.

Opponents have charged that Entergy agreed to Act 160, which effectively is a change to the conditions of the MOU. Entergy, however, never signed on to any change. Other charges against Vermont Yankee repeat a standard litany: that the plant is unsafe, unneeded, and unreliable. Opponents never have a problem with spouting out unreliable claims, even as the plant operates continuously for 500-day-plus runs. Yet the opponents exclaim, for example, that the plant is on the brink of disaster when a safety-related steam trap leaks.

Entergy filed for a federal court injunction to block the state from taking any action to shut down the plant while the case is in court. (The suit and injunction are superbly discussed in this "Yes Vermont Yankee" blog post.)

The court denied the injunction, but the Entergy board of directors made the decision anyway to order fuel and continue to operate the plant, with a refueling outage scheduled for this coming October. (Read more about the injunction here.) And, as a professor at the Vermont Law School said in the school's blog, the court's decision appears to indicate that the state has an uphill battle.

It is generally assumed that this case will g0 all the way to the U.S. Supreme Court. There is some comfort to be taken in the fact that Vermont has lost its last two (non-nuclear) cases before the court, both of them recent. The latest case, involving the use of prescription drug sales information, drew a comment from one of the justices that the Vermont legislature has to stop "targeting industries that it doesn't like." This sounds to me like what the legislature has been doing with Vermont Yankee.

Plant opponents and the state government. On August 3, two stories about Vermont Yankee appeared in the news. The first reported that the state had billed Entergy for court costs for the lawsuit over the plant's continued operation. The second reported that strontium-90 was found in the edible flesh of a fish in the Connecticut River, upstream of the plant.

The billing of court costs is done under a new law passed by the legislature, after Entergy filed its suit. The public discussion has pointed out, however, that court costs are usually determined after a suit is settled. In addition, the new law targets Vermont Yankee specifically. This sounds like what the Supreme Court justice had in mind about the state of Vermont putting a bullseye on its opponent.

Before the fish story reached the media, Gov. Peter Shumlin sent a letter to Vermont Yankee, essentially blaming the plant for the Sr-90. The opponents have always used the tactic of blaming everything radioactive, or unusual (such as the birth of a two-headed calf), on the plant. This is the first time that a Vermont governor has done it, however.

Plant advocates. At the June court hearing on the injunction, there was an anti-Vermont Yankee demonstration outside the courthouse. To counter it, Meredith Angwin (who also writes "View From Vermont posts) and I showed up with pro-Vermont Yankee signs. We approached reporters and told them our story. We were successful in having the pro-nuclear side of the story covered in the next days newspapers. 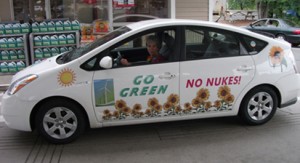 "No Nukes Hattie" in her no nukes car.

In addition, the EEP is targeting media this summer, after a vigorous winter and spring campaign of speaking events at Rotary Clubs and other places. Meredith and I have also been on several local TV and radio shows.

And, community access TV in Vermont has accepted recordings of our debates and a PowerPoint presentation with voiceover to replay during various times.

Defusing opposition. I tried a new tactic when invited to give a presentation on nuclear power to a "Great Decisions" group, in  New London, N.H. The group's programs are an hour and a half long with a break, allowing for sufficient time for dialogue. I suggested to the host/moderator that only a short introduction be used, about 10 minutes, to lay out issues, while allowing the rest of the time for questions. This was enthusiastically accepted and it worked out well.

My introduction was begun by saying that I would follow the format of a familiar church service, which begins with a confession of sins. It was stated that the nuclear power industry has made mistakes and had not apologized well for them. Acknowledgement of mistakes led to pointing out that the entire industry is designed on the belief that, with people involved, there will be mistakes. That is the reason plants have containments: human error (which includes management, design, and everything that goes into the mix) will eventually create the worst case, as happened at Fukushima.

Later, a follow-up call to the host/moderator found that the introduction was effective in defusing possible hostility from the audience, which he had been warned about when the program was first publicized. This approach should work again for other audiences.

We expect more of the same old tactics, and new ones, from the opponents. We will continue to use approaches that have proved successful, and try new ones, as we are doing this summer.

The latest polls in Vermont show 45 percent in favor of Vermont Yankee, 41 percent opposed. Progress has been and will continue to be made.

Howard Shaffer has been an ANS member for 35 years. He has contributed to ASME and ANS Standards committees, ANS committees, national meeting staffs, and his local section, and was the 2001 ANS Congressional Fellow. He is a current member of the ANS Public Information Committee and consults in nuclear public outreach. He is coordinator for the Vermont Pilot Project.

Shaffer holds a BSEE from Duke University and an MSNE from MIT. He is a regular contributor to the ANS Nuclear Cafe.