Thoughts on a Chart

Vermont's Department of Public Service (DPS) is holding local meetings about a proposed Vermont Comprehensive Energy Plan, which is supposed to be on the governor's desk in October.

On June 7, I went to the DPS meeting in Springfield, Vt. Three of us from the Hartford Energy Commission carpooled down and listened to a very good presentation by the new commissioner, Elizabeth Miller. Ms. Miller was appointed by Governor Peter Shumlin, a man who is a fervent opponent of the Vermont Yankee nuclear power plant. I was pleased to see, however, that Ms. Miller is thoughtful and articulate. I liked her presentation on Vermont's Energy Future. (Note: the Web site for the Comprehensive Energy Plan is very good, but does not yet include the June 7 presentations.)

Why did I like her presentation so much? One reason is that she used the same chart I use in many of my talks about Vermont Yankee. The chart is from a presentation given by Dave Lamont of the DPS in March of this year.

The chart shows Committed Electric Resources-that is, contracts signed between Vermont's utilities and electricity generators. The chart tracks 10 years (not a very long time, actually), starting in 2010 and ending in 2020. Here it is: 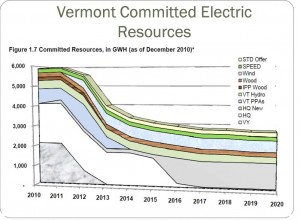 The chart assumes that Vermont Yankee closes in March 2012. You can see all the empty space (electricity demand) not filled with electricity contracts, starting in 2012.

Thoughts on the chart

The chart is quite dramatic. Vermont Yankee's contribution goes down to zero by 2013, and the existing Hydro-Québec (HQ) contracts go to zero by 2016. There are new, widely-celebrated HQ contracts, but they do not fill in as much as what was provided under the old HQ contracts. (HQ is selling us less power in the future.) Granted, the chart does not include 60 MW from Seabrook, recently announced.

On the other hand, you may note that wind energy-providing almost nothing right now (light-blue near the top)-is supposed to be a significant contributor to Vermont by 2016. Indeed, Vermont utilities have announced purchases of wind power from New Hampshire and Vermont, and these "committed resources" are on the chart. The problem, however, is that the actual wind turbines are not on the ridgelines yet. People are fighting them tooth and nail for various reasons. So, I don't think that wind will provide much power to Vermont very quickly.

Thoughts on the meeting

I was at the June 7 meeting with two of my fellow Energy commissioners. These people are devoted to energy savings, and they know quite a lot about houses, street lights (we're all very proud of our street light project), and so forth. As typical Vermont Democrats, however, they are against Vermont Yankee (and they do not read my blog). One of them said that he had never seen the chart before, and he was surprised by it. My fellow commissioners are devoted and hardworking in their roles on the town's Energy Commission, but they are also devoted to Vermont Yankee closing.

From my point of view, this chart is all over the place:

When I get discouraged, I sometimes look at the Big Picture. In this case, it doesn't help. I look at Germany, and at Prime Minister Merkel saying that Germany will have to build more coal plants to help with the "transition" from nuclear to renewables. These coal plants are likely to stay around awhile, I think.

Then I thought of Miss Marple, Agatha Christie's senior-citizen detective. Miss Marple understands the world because, after all, "everything happens in a village," she said. The motivations are the same in the microcosm of a village and in the larger world. In other words, the people of Vermont have a chart of future electricity sources, yet many people are ignoring it (despite my best efforts). The people of Germany will build coal plants-they aren't ignoring their chart, perhaps. But they are deluded if they think that a coal plant won't run for at least 20 to 40 years, once built. Those plants will not quietly fade away in 10 years in honor of wind turbines. As Miss Marple says, everything happens in a village. In this case, everything happens in Vermont. But with any luck, we will keep our nuclear plant, and Vermont will show the big world (including Germany) that nuclear, not fossil, is the proper bridge to a renewable future.