Dr. Chip Martin Wants To Save The World 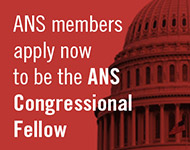 Saving our planet. That's the principal reason I applied to become the 2018 ANS Glenn T. Seaborg Nuclear Science and Engineering Policy Congressional Fellow.  After I applied, interviewed and was selected, I was invited to work in the office of Rep. Marcy Kaptur (D., Ohio's 9th District), who is now in her 19th term in the U.S. House of Representatives.  Kaptur was honored late last year for becoming the longest-serving woman in the House.  This was a fortuitous pairing, as Congresswoman Kaptur is a longtime advocate for American energy independence and now chairs the Appropriation Committee's Energy and Water Development Subcommittee. There was hardly an appointment that had more potential for me to learn the role of policy in our energy future.

I became very interested in the Glenn T. Seaborg Science and Engineering Congressional Fellowship back in 2000 when I learned about it.  The time was not right for me then, but a convergence of favorable conditions made the time right to apply in 2018.  I wanted to be a direct contributor to the federal policymaking process.

I understand that nuclear energy is relatively more expensive today because of cheap natural gas; however, nuclear is clean, reliable, and can provide power even when the sun or wind cannot.  The U.S. nuclear industry produces more power than any other country and is still the envy of the entire world.  Our safety record, per-megawatt generated, is better than any fossil or renewable energy.  This is the 'elevator talk' message that we need to hammer home in town hall meetings as well as the halls of Congress.

It's unfortunate that the old saw says "a nuclear accident anywhere in the world affects nuclear power everywhere," thus are the results with Three Mile Island, Chernobyl, and Fukushima.  In my opinion, U.S. involvement in power generation overseas is the best way to export our safety posture to minimize the likelihood of such accidents in the future.  And a vital nuclear industry in this country is critical to maintaining the technical base and engineering skills that underwrite our national security.  Congress must understand that if we forfeit our nuclear edge in the commercial sector, it will cut deeply across national security lines as well.

I am concerned that the critical decisions which will determine how we move forward with our energy mix are being decided by people with little experience with nuclear science or, indeed, any technical field. That is why public engagement is a vital skill that ANS needs to promote with its members and to exercise regularly.  America's nuclear plants are at risk due to a combination of electricity markets focused on short-term spot prices, historically-low natural gas prices, and a lucrative assortment of federal and state subsidies for the construction and operation of renewable generation.  As a result, U.S. operators are beginning to shut down their nuclear plants prematurely. Half of the current fleet of U.S. nuclear generation is currently at risk despite the contribution that nuclear makes to carbon mitigation.

To address these issues, we need to clearly communicate the negative impact on the American public by the premature closure of nuclear power plants: loss of up to 60% of our carbon-free electricity generation; lower diversity of supply to the U.S. electrical grid; and significant negative economic impacts, including the loss of thousands of high-paying jobs, hundreds of millions of dollars in local tax payments, and secondary impacts that accrue to the communities which host these plants.

While my motives for seeking the fellowship were not particularly personal, I completed my year with the leverage to seek a full-time position on a Congressional staff or perhaps seek a position on the Nuclear Regulatory Commission or even with the Defense Nuclear Facilities Safety Board.  At least two prior ANS fellows have taken full-time positions on committee or personal staffs in Congress.  My plans definitely include returning to the D.C. area and to help make a significant difference for the nuclear industry on behalf of climate change.

My goal as a Congressional Fellow was to connect science, especially nuclear science and technology, with policy and to build a network of science and engineering leaders who understand government and policymaking and are prepared to develop and execute solutions to address societal challenges. I think I succeeded beyond my wildest expectations, as the networking opportunities on the Hill are amazing. My portfolio during the fellowship year included nuclear security, especially with respect to balancing modernization needs with nonproliferation goals; cybersecurity as it relates to energy grids, election integrity, financial institutions, and warfare; transportation; and infrastructure reinvestment.

I also laid the groundwork for the creation of a university research and technology park in the Congresswoman's district.  This initiative is intended to draw from several universities in her district with the goal of bringing high tech jobs into the area as well as retaining young scientists and engineers from elite Ohio universities in the region to fill those jobs.

Now back in Nevada, I hope to use the lessons learned from that effort to expand University of Nevada, Las Vegas's efforts to attract high-tech companies and jobs to Southern Nevada.

So now, after leaving the Hill, I have seriously considered a run for the U.S. Congress (NV-04) in 2020, but personal considerations have made this option unlikely.  I might, however, work on the presidential campaign for one of the more pronuclear candidates in 2020; or I might eventually return to the Hill as a full-time staffer.  It's safe to say that during my fellowship I contracted "Potomac Fever."  I strongly believe that each of us in the nuclear science and technology field should consider running for office.  Even an unsuccessful campaign has the effect of bringing these ideas into the public discourse, which has great value given the ignorance of the public and our politicians regarding the benefits of this technology with respect to the energy policy choices we face.

As we collectively look to the future, I want the nuclear science and technology community to focus on how nuclear power can help solve our planet's current existential challenge.  My next article for ANS Nuclear Cafe will lay out my perspective on a strategy for addressing this need.  Nuclear is critical to this problem - both the existing fleet and the next generation of designs.  But time is our enemy.  An encouraging development is that we have new friends in the green community, and many recent public policy evolutions are encouraging.  Stay tuned. 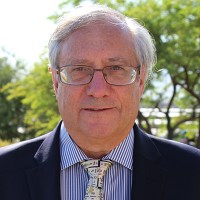 Dr. Charles R. "Chip" Martin is currently serving as a Distinguished Engineer at the Nevada National Security Site for the National Nuclear Security Agency.  He was the 2018 ANS Glenn T. Seaborg Science and Engineering Policy Fellow.  Prior, Dr. Martin was the Chief Nuclear Officer for Nevada National Security Site. He previously worked with the Defense Nuclear Facilities Safety Board, the Office of the Secretary of the Air Force and the Department of Energy. He earned a Bachelor of Science in Nuclear Engineering from North Carolina State University and a Master of Science and Ph.D. in Nuclear Engineering from the Air Force Institute of Technology.

Please feel free to leave a constructive comment for the author.