Yesterday, the Nuclear Regulatory Commission announced that its commissioners had approved the award of a Construction and Operating License (COL) for DTE Energy's prospective Fermi Unit 3, to be built on the site of the existing Fermi-2 near Detroit, Mich. The COL will also notably be the first for the GE Hitachi ESBWR, or "Economic Simplified Boiling Water Reactor," a Gen-III+ nuclear plant with passive safety.

GE's ESBWR received its Design Certification from the NRC late last year, and joined the Westinghouse AP1000 as the second Gen-III+ design approved in the United States. While both have passive safety features, the differences in the nuclear plants is remarkable. 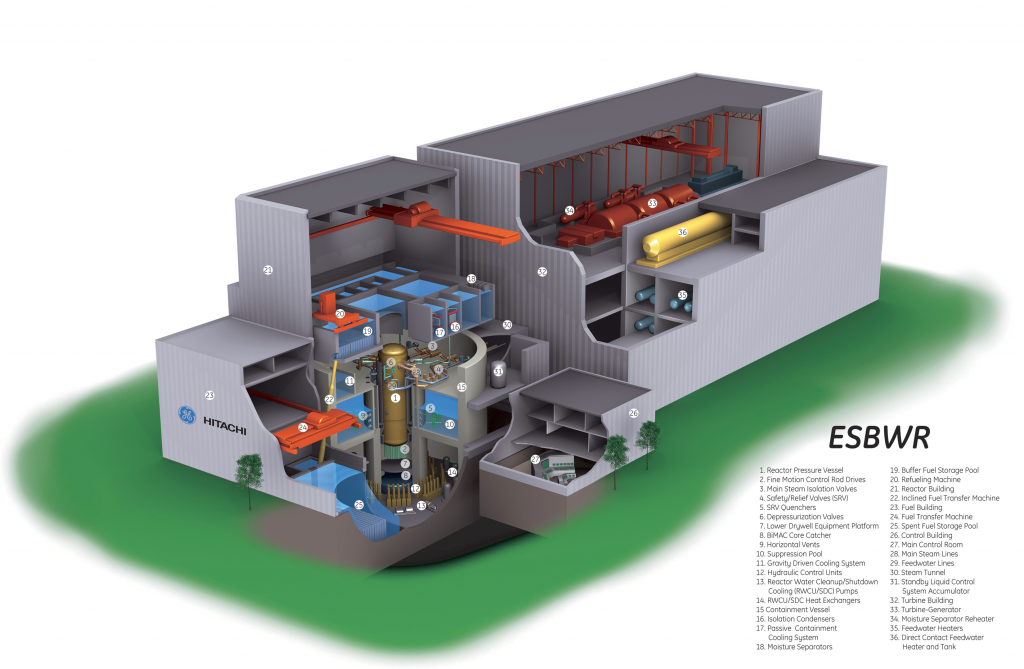 The ESBWR is an advanced design both of the reactor specifically and the nuclear plant overall that GE Hitachi describes as being not only inherently safer than previous plants due to the inclusion of passive safety systems, but also less expensive and complex to construct than other plants; the design uses natural circulation through the core instead of motor driven pumps, and the plant design eliminates 11 whole systems and 25 percent of the pumps, valves and motors used in the previous boiling water reactor series design. Passive safety systems give the ESBWR a calculated core damage frequency of 1.7 x 10-8/year, which GE Hitachi claims to be the lowest of any available plant in its class. It should be noted that this plant, if built, would become the most powerful single unit in the United States, with an electrical rating of 1600 MWe gross.

Natural circulation is not new to BWRs-in fact, the very earliest range of BWRs was dominated by designs that used no pumps to force water through the core, but rather the natural tendency of hotter water to rise and colder, denser water to fall. The pioneering and famous Argonne National Laboratory's EBWR plant (whose construction was started in 1954, and which entered operation in late 1956) as well as General Electric's also-pioneering Vallecitos BWR (whose construction began in June 1956 and which began putting 5000 KWe of power onto the PG&E grid on October 24, 1957-an astonishingly short period) were natural circulation units that proved, quite early, the viability of that concept in a world that had not yet wholly embraced it. 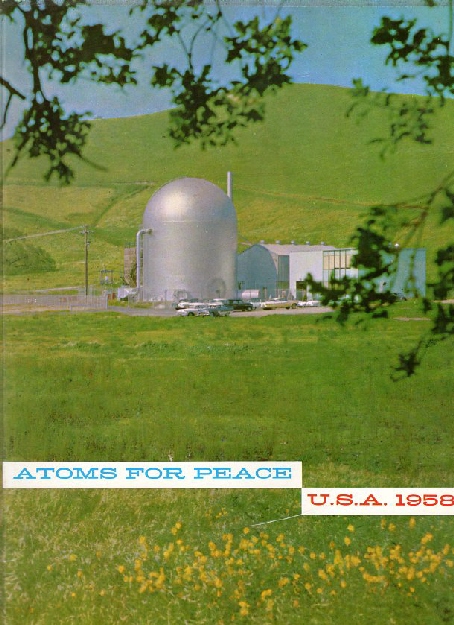 General Electric Vallecitos Boiling Water Reactor pictured on the cover of "Atoms for Peace 1958," published by the US Atomic Energy Commission and distributed at the 1958 Geneva Atoms for Peace Convention. Volume in author's collection.

GE Hitachi Nuclear Energy also claims that the ESBWR will benefit from modularized construction in order to shorten the construction time, and points up decades of experience between itself and partner Hitachi-GE. It should be noted that two units of the ABWR design that precedes the ESBWR were built (that is, from concrete pour to fuel load) in 36.5 months and 38.5 months in Japan (these are Kashiwazaki-Kariwa-6 and -7, respectively)-an amazingly short time for nuclear plants in the Gigawatt class.

Even with the advances and modifications in design that make the ESBWR new, there is a great amount of carryover from earlier proven designs in the plant-everywhere from the fuel design, to the design and operation of isolation condensers for shutdown cooling.

DTE Energy almost immediately made a press release stating that it had indeed received approval for issuance of the COL (which is yet to come-what has happened is the vote, not the actual issuance) for Fermi-3, but hastened to add that it presently has no plans for the construction of the plant. What this means is that DTE is keeping this option open among many other options, which is probably a very good thing taking into account the rapidly changing energy landscape in the United States-changing as regards fuels, and as regards emissions.

DTE operates one nuclear plant at the site-Fermi-2, a GE BWR whose construction was slowed and then practically stopped in the middle 1970s when lower-than-predicted energy demand coupled with a financial crisis at then-owner Detroit Edison led to a wholesale stoppage of the construction of all of its power plants, both coal and nuclear. However, conditions had begun marginally to improve when the brutal winter of 1976-1977 awoke Detroit Edison to a disturbing reality-that it could not always count on coal to arrive. Even though the company owned its own trains, these trains operated over the rails of private railroads that were both bottlenecked due to the weather and in large part bankrupt (Penn Central). This winter crisis and shortage of fuel led Detroit Edison to ask for a reduction in usage from its customers, which it had never done before, and also led to a system-wide five percent voltage reduction. Immediately, the company resumed work on a number of idled projects and nuclear energy was placed at the forefront as its fuel cycle was long enough to be undisturbed by such external forces. Whether or not any institutional memory of this crisis lingers at today's DTE Energy is unknown but the wide knowledge of the benefits of a diverse fuel mix are clear, and as DTE's press release shows, are clear to DTE itself. Further, while today's railroads are not bankrupt, they are gridlocked, and weather-related problems are not going away.

There may be some other incentives for DTE Energy to (eventually) construct and operate a new nuclear unit on its system. DTE Energy, upon announcing the application back in 2008, noted that ordering at that date locked in eligibility for a portion of $6 billion in tax credits should the plant ever be built. Also, studies at that time showed that a new nuclear unit would still be the least expensive baseload plant for the company-but DTE stated that "changes in the regulatory structure" of Michigan would be needed to "provide the certainty needed for the investment" to build such a large and expensive plant. As we're now well aware, the Environmental Protection Agency's Clean Power Rule, if properly fixed and then properly implemented by Michigan, could well provide that change in regulatory structure.

Only one other COL application that specifies an ESBWR is presently active at the NRC. This is Dominion's application for North Anna-3, which is not expected to be complete until next year. 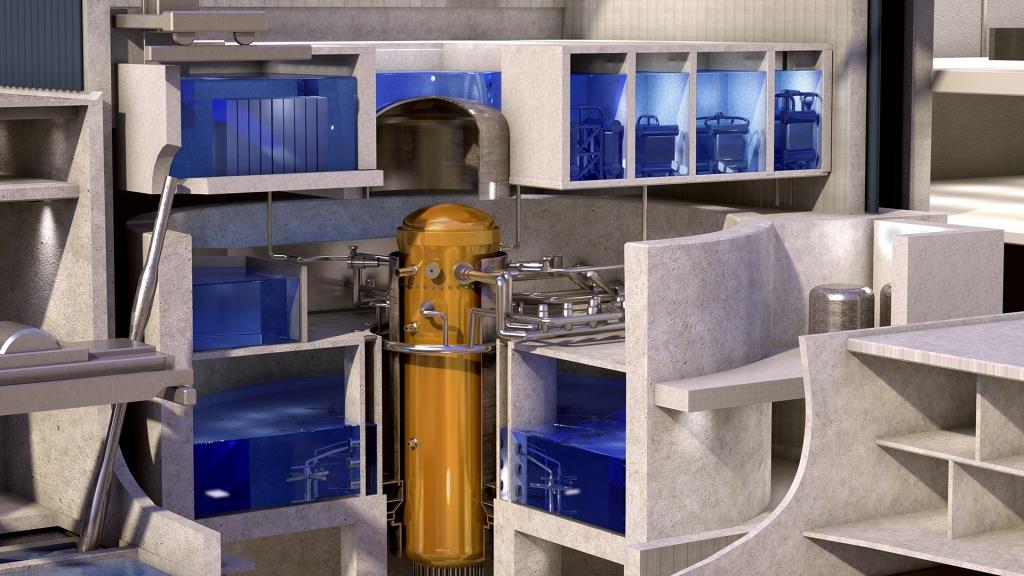 At present, judging by the guarded tone of DTE's press release, we probably can expect an avalanche of silence. As with everywhere in the United States, the final effect of the EPA Clean Power Rule has yet to be made apparent-and this will have a major effect of DTE Energy's choices of generating sources when finally it comes into effect in Michigan. For now, DTE is marking time-it has made its application on time to lock in tax credits that it could pass on to its customers; it awaits regulatory alteration that would protect a large capital investment; and it looks toward a time when it may have to take coal off the table. The future for this plant may appear bleak, in point of fact, but there surely is at least a glimmer of hope that it will get eventually be built.

Will Davis is Communications Director, historian, newsletter editor and board member for the N/S Savannah Association, Inc. He is a consultant to the Global America Business Institute, a contributing author for Fuel Cycle Week, and writes his own popular blog Atomic Power Review. Davis is also a consultant and writer for the American Nuclear Society, and serves on the ANS Communications Committee. He is a former US Navy reactor operator, qualified on S8G and S5W plants

The Elk River reactor, as it was generally known in the AEC parlance of the day, was a pioneering effort in America's nuclear energy history.  Hailed widely as "Rural America's first atomic...

Among the many different reactor concepts being investigated in the late 1950s and early 1960s was the idea that the steam produced by a boiling water reactor, which normally goes straight to...

Yesterday, the saga of nuclear energy in post-Fukushima Japan reached an important milestone as the final utility that owns nuclear power plants in that country applied to the regulator for...

Pathfinder: A Path Not Taken

The recent U.S. Environmental Protection Agency announcement of policy regarding carbon emissions from power plants has triggered a renewed interest in nuclear energy over the past few weeks;...

The news has finally come out on a long-awaited subject: the first determination by Japan's new Nuclear Regulation Authority (NRA) that a nuclear plant in Japan lies on a seismic fault...