Florida governor Rick Scott and his cabinet met on May 13 for the final state-level site selection determination for new AP1000 nuclear reactors planned to be built at the Turkey Point Nuclear Generating Station in southern Florida. The hearing was well-attended by opponents and supporters.

In attendance were the Energy Information Center "student army"-including nine nuclear engineering students from the University of Florida who spoke in favor of the plant. They are all members of the American Nuclear Society's Student Section at the university. The students are Madison Martin, Jitesh Kuntawala, Patrick Moo, Joseph Cashwell, Logan Blohm, Lucianne Behar, Hernan Godoy, Jonathan Rosales, and Nicolas Silva.

"They were very effective," said Jerry Paul, director of the Energy Information Center. "In fact, they somewhat stole the show. I counted six times when another speaker (including the governor) made reference to them."

The students stood as a group and provided testimony in support of the new reactors. Most moving to the audience were the following comments:

"Our generation is the future of clean energy and the future of our economy. New nuclear energy supply is essential to both... nuclear energy means jobs... This is attractive to students who graduate college and look for jobs that can help them get a start (especially those of us who have student loans to pay off!). These nuclear plants represent the future employment of engineers like us." 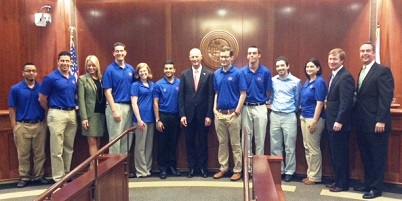 The governor and cabinet ultimately voted unanimously to approve the site selection for the reactors.

Congratulations to these fine students on a job well done. 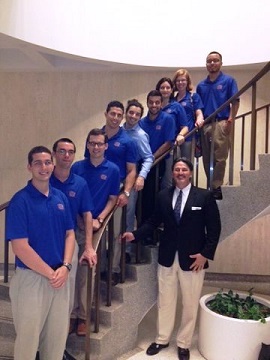 Jerry Paul is a nuclear engineer, attorney, and former member of the Florida legislature. He was principal deputy administrator of the U.S. National Nuclear Security Administration and was the Distinguished Fellow for Energy Policy at the University of Tennessee Howard Baker Center for Public Policy. He is director of the Energy Information Center.