Speaking out of turn at the NRC meeting

A few days ago, the Nuclear Regulatory Commission held a public meeting to discuss its yearly assessment of the Vermont Yankee nuclear power plant. The assessment results were excellent (all green).

The plant also had excellent results last year, but the NRC meeting last year was a situation that moved close to mob rule. I wrote about it in The Politics of Intimidation at ANS Nuclear Cafe.

I didn't know what to expect this year, and I said as much in a radio interview at WAMC. Well, let's put it this way: I kind of expected that the meeting would be even more out of hand.

However, this year turned out to be quite different. On my own blog, I described the meeting as "mellow," which I never would have expected. Comparatively few opponents came this year, despite organized attempts to run carpools to the meeting.

The meeting turned out to be fairly mellow. But... not completely.

An opponent tactic that did not work

At last year's NRC meeting, a group of older women called the Shut It Down Affinity group showed up wearing costumes and masks (black clothes and white death masks) and walked single file around the room. They then took up a position behind the NRC table and refused to move. Eventually, a crowd swarmed up to support them.

This year, they tried it again-but it didn't work. Once again, they had costumes (tied-dyed shirts) and masks (of former NRC Chairman Gregory Jaczko). Once again, they started by walking single file, and then stood behind the NRC and spoke and chanted while the NRC personnel tried to begin the meeting. Once again, the NRC people left the room and then came back, with the plant opponents still standing at the front. But things were a little different this time-because the plant opponents did not overwhelmingly outnumber plant supporters. 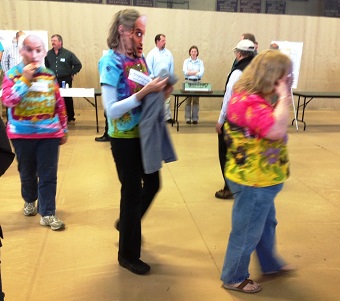 The women were quoting Jaczko that "all reactors should be shut down," and the NRC was asking them to sit down, back and forth and back and forth. Then one man in the audience shouted, "It's about democracy!" He of course meant that the women should stay in front of the room because of "democracy." 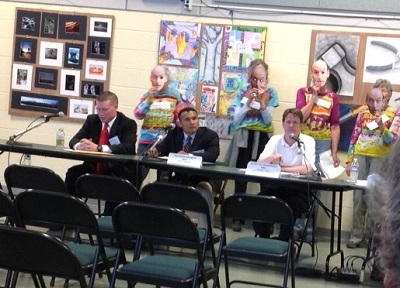 But I had had enough. There was a microphone on a stand in the room, and I just went up to it and interrupted the whole thing. I said something like:

"No, it's about diversity! It's about whether people with different opinions and different views and different backgrounds will be allowed to talk at this meeting! Apparently not!" Then I left the microphone.

This was very bold for me. I was shaking when I sat down, and I mean physically shaking, not "feeling shaken." I still can't believe I did this! But... you could have heard a pin drop in the room when I finished. And shortly thereafter, the Jaczko impersonators sat down and the meeting proceeded.

This time, the stand-behind-the-NRC-and-keep-talking tactic did not work.

Why didn't the opponent tactic work?

I would like to take credit, but it was basically because the plant SUPPORTERS were showing up and the plant OPPONENTS were NOT showing up-so the supporters weren't completely outnumbered. I would have been terrified to do something like this at last year's meeting, in which we were completely outnumbered by opponents. But when it is more even, plant supporters can assert themselves, even when there are opponents who are trying to wreck the meeting.

I will take credit, though, for two things:

At least, I hope so. I also hope I never do anything like that again. The emotional strain afterwards was overwhelming. When I did it, I was mad and had energy. Afterwards, I was a mess.

I wish you all good meetings, run by Robert's Rules of Order. I wish you peace.