I have been thinking lately about "framing the discourse" on nuclear energy. Framing is the way that people use words and concepts to present their points of view in an understandable and appealing way to other people. I think that pro-nuclear people are often bad at this. We figure that "the truth will set you free," and then we don't spend very much time on how to frame the truth. 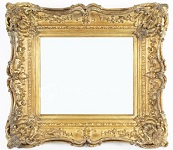 George Lakoff wrote the most-quoted essay on this subject: Framing 101: How to Take Back Public Discourse.

Lakoff's first example of framing is the phrase: "Tax Relief." This phrase implies that taxes are a burden from which anyone would seek "relief," and that someone who relieves you of the burden is a hero. You wouldn't want to stop a hero who is bringing "relief"-that would make you seem a "villain."

Later in the essay, Lakoff contrasts this with the idea of taxes as an "investment" in America's future and especially its infrastructure. Nobody needs "relief" from continuing the wise "investments" our parents made in highways, schools, the Internet...

What does framing have to do with nuclear power?

Let me give you an example. I just finished reading a book about the Vermont Yankee nuclear power plant: Public Meltdown by Richard Watts.

In writing this book, Watts had amazing access to Vermont Yankee opponents, who were pleased to share their strategies with him. One strategy was designing the phrase: "Retire Vermont Yankee on Schedule."These words were very effective framing: almost a work of genius. 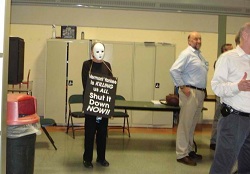 Member of Shut It Down Affinity Group at NRC meeting in Brattleboro, May 2012

The hard-core opponents don't use this phrase among themselves. For example, there is a "shut-it-down affinity group." The women in that group chain themselves to the Vermont Yankee fence and get arrested. They do this on a regular basis: They have been arrested about 20 times. They get lots of newspaper coverage, and they receive admiration from other opponents. But do they attract more people to their cause? I don't think so. Most people are kind of "middle-of-the-road." Most people don't identify with "shut it down" rhetoric or frequent arrests.

"Retire on Schedule..." That is a different matter. That is effective framing. The statement says that you are only trying to live up to a scheduled agreement, something anyone would want to do. The word "retire" also implies that a plant is aging and should be closed. To agree with "Retire Vermont Yankee on Schedule" is to affirm that you are a law-abiding, middle-of-the-road citizen who thinks that agreements should be honored.

Of course, there was never such an agreement. Vermont Yankee's Nuclear Regulatory Commission license was renewed: it was not retired. At the state level, Entergy's purchase agreement in 2002 included a provision for revenue sharing after 2012 (when the first NRC license ended and was renewed). In other words, there wasn't ever a "scheduled retirement" for 2012. There was a possible retirement (if they didn't get a license renewal or state certificate), but the "on schedule" part is the kind of close-enough statement (like  "tax relief" or "tax investment") to be effective framing.

We can admire the opponents for their anti-nuclear framing, but how can we do similar framing from a pro-nuclear point of view? Let's take the "Retire Vermont Yankee" framing. What would our framing phrase be?

Or maybe something completely different.

Let's crowd-source this one. Suggestions please! 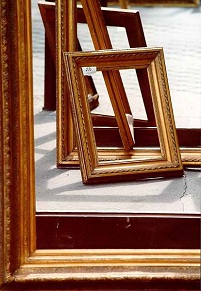