I've been fascinated by nuclear batteries-also known as radioisotope thermal generators or RTGs-since I first saw a pacemaker battery in an exhibit at the Maryland Science Museum. As my wife and children will testify, I a

m one of those slow moving people at museums who insists on reading nearly every placard under every exhibit. I'll never forget my feeling of wonder as I found out that 1/200th of an ounce of plutonium-238 could provide sufficient heat to that tiny battery to make it produce a continuous electrical current sufficient to run a heart pacemaker.

Since an isotope with an 87 year half life will still be producing about 90 percent of its initial heat after decaying for 14 years, those batteries were designed to be able to supply a heart patient for as long as they would be expected to survive. They did not need for an external power supply-with its attendant infection risks and they did not require additional surgeries to replace chemical batteries.

direct current power. I found out that plutonium-238 was not the only possible isotope. There is a whole list of possibilities depending on the specific applications and measures of effectiveness.

I learned that pacemaker batteries were only one of several applications where a small amount of long-lived, reliable power was valuable enough to provide a positive cost benefit. Other applications include remote lighthouse power, navigational buoys, satellites, deep space probes, and communications facilities in remote locations.

I also learned that the batteries had a substantial body of experience that showed that they were dependable and needed little maintenance.

For a variety of reasons, including the sustained campaign against all things nuclear, RTG technology is virtually unknown and nearly all eff 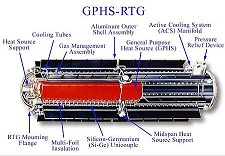 orts to use nuclear batteries have been abandoned. About the only time that the topic gains much attention is when the leaders of a high-profile space program like Cassini or the Curiosity tell the public that their mission has been enabled by one or more RTGs.

The below video offers a detailed look at the construction and testing performed for the 110 watt RTG that is continuously charging the chemical batteries that supply more concentrated surges of power to the Curiosity rover.

There is one potential application of RTG technology that continues to intrigue me, especially as I learn more about the challenges that faced the operators at the Fukushima Daiichi nuclear power station as they gradually depleted all of their available power supplies.

Though RTGs are not a huge source of concentrated power, they provide a steady stream of current that can recharge chemical storage batteries. A 100 W RTG, for example, provides 2.4 kilowatt-hours per day, but there would be no need to limit the inventory to just a single unit. There is also no need to compete with space applications for plutonium-238; shielding weight is not a major consideration in a large nuclear power facility. The most abundantly available isotope is strontium-90, an isotope that commercial nuclear reactors produce in large quantities.

Of course, that isotope is not readily available in the United States since we are not recycling our used nuclear fuel, but I would imagine that it could be purchased from the French, the Japanese, or the Russians.

RTGs, or their Stirling engine heat to power cousins, operate on a completely different principle than a diesel engine and do not need any external support to keep doing their job.

Though they would need only infrequent attention, there are plenty of nuclear-trained people available to ensure that emergency power RTGs would not run into some of the same difficulties that have given the technology a bad name in remote areas of the former Soviet Union.

I am sure that there are obstacles to overcome, and some of them may even be show stoppers, but just imagine how comforting it would be to know that a sustained, complete loss of electricity is virtually impossible at a facility with a few RTGs installed in the power system.