Facts and fears at NRC public review in Vermont

Vermont Yankee's annual NRC performance review for the previous calendar year was held May 23, in Brattleboro Union High School, within 10 miles of the plant. In previous years, annual reports and state meetings have been held here, and in the Vernon Elementary School, across the road from the plant. The town of Vernon stopped hosting plant-related events due to behavior of some attendees.

This year's meeting was in two parts. The first was set up like a science fair, with displays and the opportunity to move from one exhibit to another to talk individually with presenters. The second part of the meeting was held in the same room after the removal of displays, with a traditional setup of chairs for attendees, a table and chairs for NRC officials, and a moderator to manage a Q&A session. Events during this second part of the meeting were covered in "The Politics of Intimidation." 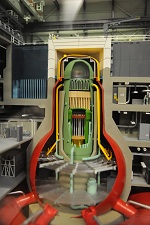 One of the displays in the "science fair" part of the meeting was a cutaway model of Vermont Yankee's reactor building. The model showed the fuel pool wall and liner depicted with clear plastic. In the pool were models of fuel assemblies, and the walls were blue to show the location of the water. This model clearly demonstrated that the fuel is several stories below the refueling floor, behind a thick outer wall, the thick pool wall, and pool liner. Obviously a great deal of work and expense had gone into this model. It seems to have been made to address one of the issues that "anti-nukes" continually raise against boiling water reactors with the MK I containment: an alleged vulnerability to aircraft attack by intentional collision.

An attempt to explain

As I approached the table with the model, a member of the public was examining it. Behind the table was the staff member assigned to explain it to the attendees. I joined the conversation. I mentioned my background as a startup engineer at the plant and pointed out that the fuel is behind very thick walls, as shown in the model. Also, the top of the pool is at the refueling floor level, and the water surface just below, as clearly shown in the model. It was pointed out an aircraft would not be a good "battering ram" against the reinforced concrete walls.

Walking away with the member of the public  toward the next display, I continued to explain that the industry had carefully studied the effects of intentional large plane crashes into plants. The study found that the only parts of a large commercial jet of concern are the engines. The turbine shaft acts like a spear. The rest of the plane is only a little more than heavy duty aluminum foil, when a plane is used as a battering ram. The tragic crash at the Pentagon on 9/11 proved that.

Stopping, turning, and looking at me, I could see the fear in this person's eyes as she said "I don't buy it."

During the second part of the meeting, nearly all the speakers were opposed to Vermont Yankee and nuclear power. Many statements and questions raised or reinforced fears.

One speaker listed all the core damaging accidents in the history of nuclear power, then said that the frequency was much more than had been predicted and "promised." As I recall from hearing Professor Rassmussen describe the results of his work [WASH-1400 "Reactor Safety Study" (1975)], the frequency he stressed was for core damaging accidents resulting in releases to the public. Core damaging accidents not resulting in releases to the public would be expected to be more frequent. After the Three Mile Island accident he reviewed his report, and found that an accident like TMI was predicted to have already happened before then!

Former State Representative Sarah Edwards, from Brattleboro, complemented the opponents for being there, and for being persistent. She said that she had visited Waterford, Yucca Mountain, WIPP, and Oak Ridge, and was on the Vermont State nuclear advisory panel; all while a member of the legislature. She asked that used fuel in the pool be moved to dry casks as soon as possible. Edwards said that she understood that used fuel had to stay in the pool for five years after being discharged form the reactor. As I understand it, this request could be fulfilled, once the Vermont Public Service Board modifies the plant's Certificate of Public Good. Currently, the plant is approved only for dry cask storage sufficient to reach the end of the original 40-year license-which was this past March.

On June 4, the State of Vermont filed an appeals brief in the US Second Court of Appeals, as expected. The consensus is that this case, Entergy v. Vermont, will go to the Supreme Court.

The Vermont Public Service Board is conducting an examination for a new Certificate of Public Good for Vermont Yankee. There will be a public hearing in November in Vernon, the plant's location.

David Ropeik, former Boston environmental journalist and expert in risk communication at the Harvard School of Public Health, is well known to the American Nuclear Society's Northeastern section, having spoken at and attending our meetings over the years. His recent article on "what controls what we think" is highly worthwhile reading. The feelings and behavior at the NRC's May 23 meeting confirm his conclusions.