By a 4-1 vote, the agency opens the door to $14 billion in new construction of two Westinghouse AP1000 nuclear reactors

The U.S. Nuclear Regulatory Commission on February 9 in a 4-1 vote cleared the way for its Office of New Reactors to issue a combined construction and operating license (COL) to the Southern Nuclear Operating Company for two 1100-MW Westinghouse AP1000 model reactors to be built at the company's Vogtle site, in Waynesboro, Ga. (NRC final order) NRC Chairman Gregory Jaczko cast the one dissenting vote.

The Vogtle site is already home to two existing nuclear reactors owned by Southern that started commercial operations in the late 1980s.

In a statement, Jaczko said that he wanted the COL issued only on the condition that Southern implement the agency's Fukushima safety agenda. Said Jaczko:

I cannot support the issuing of this license as if Fukushima had not happened.

NRC Commissioner Kristine Svinicki, speaking for the four commissioners who voted in favor of issuing the COL, said that Jaczko was mistaken if he thought that his peers on the NRC had disregarded the Fukishima crisis. In a statement that cut through Jaczko's dissent like a samurai sword,  she said:

There is no amnesia individually or collectively regarding the events of March 11, 2011, and the ensuing accident at Fukushima.

Svinicki added that there was no recommendation by the NRC staff to amend the COL to take Jaczko's requirements into account. Said Svinicki:

We found that it would not improve our systematic regulatory approach to Fukushima nor would it make any difference to the safety of operating or planned reactors.

In December 2011, when the NRC approved the amended design for the AP1000, Jaczko said that he voted for it based on the "enhanced safety margins" provided by "innovative safety and security functions."

In dissenting against the COL on February 9, however, Jaczko went against the recommendations of the agency he leads.

The original application under the new Part 52 rule for the Vogtle site's COL was submitted in March 2008, followed by a supplemental document submitted in October 2009. True to its word, the NRC reached a decision in just under 48 months. Along the way, the NRC had considered safety and environmental issues and held multiple public hearings to get testimony on them.

An independent review by the Advisory Committee on Reactor Safeguards was submitted in its report in January 2011. The NRC's final safety evaluation report was completed August 9, 2011.

NRC spokesman Scott Burnell told financial wire services that the agency will issue the COL immediately, which will kick off a huge construction boom in Georgia. The Shaw Group, which will be building the two units, announced plans to hire 3500 workers for the $14-billion construction phase that is expected to take until 2016 for the first unit and an additional year for the second. 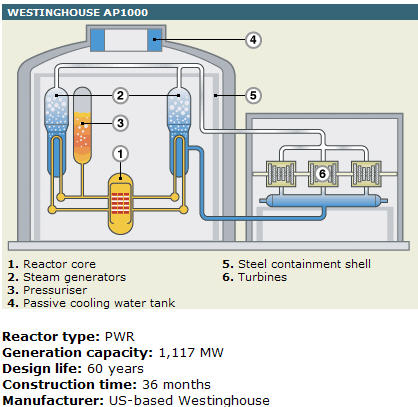 When operating, each reactor will employ about 800-1000 people. The supply chain for components will stretch across the entire United States.

The Vogtle project will be seen as a major test of the ability of Westinghouse and its contractors to bring in the two reactors on time and within budget. Westinghouse is already building four of the new reactors in China, with the first one expected to enter revenue service in 2013.

Southern Company chief executive officer Thomas Fanning said in a statement that "this is a historic accomplishment," and Georgia Power CEO Paul Bowers told the Atlanta Constitution, "We never wavered."

Marvin Fertel, head of the Nuclear Energy Institute, focused on the historic nature of the decision, the first of its kind in more than three decades. Said Fertel:

Today's licensing decision sounds a clarion call to the world that the United States recognizes the importance of expanding nuclear energy.

A coalition of nine anti-nuclear groups announced plans to challenge the NRCs decision. The groups, echoing the views of the NRC's Jaczko, said that the NRC is violating the law without taking the safety issues associated with Fukushima into account. They said that they would file a lawsuit in federal district court.

The legal challenges pose a near-term risk to the project as the groups plan to ask the courts to issue an order stopping construction until their case can be heard, which, if granted, could take many months.

What's next for the nuclear renaissance?

Within the next month, the NRC is expected to issue two more COLs for construction of Westinghouse AP1000 reactors at South Carolina Electric & Gas Company's (Scana) V.C. Summer nuclear plant in South Carolina. That project is expected to cost about $10 billion. Scana did not apply for a federal loan guarantee. If the license is approved as expected, Scana would complete both of its reactors by 2018.

South Carolina and Georgia have in common a regulated rate structure and the ability of the utilities to request new rates to cover the costs of the construction of the reactors while they are being built. The measures save millions in interest charges.

In related news, the Tennessee Valley Authority said in a financial document issued this week that it expects to complete the Watts Bar-2 reactor in 2014 and that it has issued a construction contract to complete the Bellefonte reactor by 2020. It will start work on Bellefonte once Watts Bar-2 is done. In 2007, TVA completed a reactor at Browns Ferry.

Plans to build new nuclear reactors in states using the merchant model-where costs cannot be recovered until the plant is in revenue service-have faltered, including Calvert Cliffs-3 in Maryland.

Exelon CEO John Rowe said of the Maryland project that the expected long-term low cost of natural gas makes such a nuclear energy investment there "inconceivable" given the speed at which a combined cycle gas plant can be brought online.

Constellation previously walked away from a loan guarantee for Calvert Cliffs-3, citing the high cost of the credit risk premium calculated by the federal government. The risk premium for the Vogtle plant is said by industry sources to be very low in comparison.

Yet, there may be policy changes in the future. In Ohio, for example, the government is reviewing fracking practices after fluid injected in a waste disposal well set off earthquakes near Youngstown. And, at a national level, a future U.S. president and congress may revive carbon taxes.

Nothing is certain today except for the NRC's vote.

Laura Scheele is the Communications and Policy Manager for the American Nuclear Society.