It is the latest in a series of deadly attacks 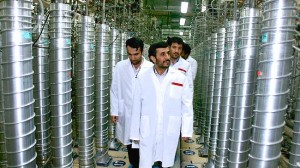 An Iranian nuclear scientist was killed in Tehran on January 11 by a bomb that was magnetically attached to his car. A driver, who doubles as a body guard, was also killed in the blast.

The scientist was identified as Mostafa Ahmadi Roshan, age 32, who was a departmental manager at the Natanz uranium enrichment plant.

According to media reports, a motorcycle rider and a passenger attached the bomb to the car in heavy morning commuter traffic. The attack occurred at 8:20 AM Tehran time. It is the fifth such attack in the past two years.

The attack came one day after it was reported that that Iran had launched uranium enrichment production at its underground facility at Fordow near the city of Qum. It is reported to be enriching the uranium to 20-percent U235, which is the boundary between commercial use and weapons use. Iran has been making 20-percent enriched uranium at Natanz, about 400 km south of Tehran (250 miles), since February 2010.

In a related development, the Wall Street Journal reported that two days later on January 13 that Iran agreed to allow a high-level team of International Atomic Energy Agency nuclear inspectors enter the country on January 28. The delegation will be headed by the agency's chief weapons inspector, Herman Nackaerts.

It is not clear whether the Iranian government will let the inspectors visit is nuclear sites, underground uranium enrichment facilities, and interview officials that the United Nations agency believes may head a nuclear-weapons program.

The combination of three events occurring within a few days of each other indicates the intensity of the issues surrounding Iran's nuclear programs.

In Iran, government officials repeated their accusations that the United States and Israel are responsible for this and prior bombings. Top-level Iranian officials called for revenge.

The Obama administration rejected the accusation and also condemned the murder. In Israel, government officials were said to have hinted at covert campaigns against Iran, but did not say that the nation was directly involved in the most recent attack.

Pattern of prior attacks 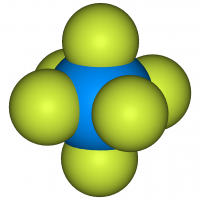 The explosion in Tehran this week resembles four others, including two in 2010. It comes on the third anniversary to the day of the killing of another Iranian nuclear scientist, Massoud Ali Mohammandi, who also worked on uranium enrichment.

Roshan, who died in the explosion this week, was described as a mid-rank manager in charge of procurement of materials and services for Iran's uranium enrichment program.

In July 2011, Dariush Rezaeinejad was shot dead by persons unknown.  He worked at K. N. Toosi University of Technology in electrical engineering as well as the Atomic Energy Organization. These are conflicting reports about his connections to Iran's nuclear energy programs.

The sophistication of these attacks indicates that whomever is carrying them out has an organization chart of key personnel in Iran's nuclear programs and has tracked specific individuals in terms of where they will be on particular dates.

For instance, Roshan worked on procurement at Natanz, but was killed on his way to an office in Tehran. The attack suggests a long period of undetected intelligence gathering and surveillance of potential targets. It suggests that future bomb attacks may take place.

Other covert attacks on Iran that have delayed its nuclear programs include the Stuxnet worm, which resulted extensive mechanical failures of uranium centrifuges in 2009 and 2010. There are significant clues that point to the likelihood that Israel had involvement in the development of the Stuxnet computer worm.

A devastating explosion on November 12 at the Bid Kaneh missile R&D center killed a high ranking military official in charge of rocket development. Some analysts  have suggested that the explosion at the missile site resulted from an attack by an unmanned aerial vehicle (UAV).  Iran has since displayed what it says is a U.S. surveillance UAV that it claims it captured after it crashed inside Iran's borders. 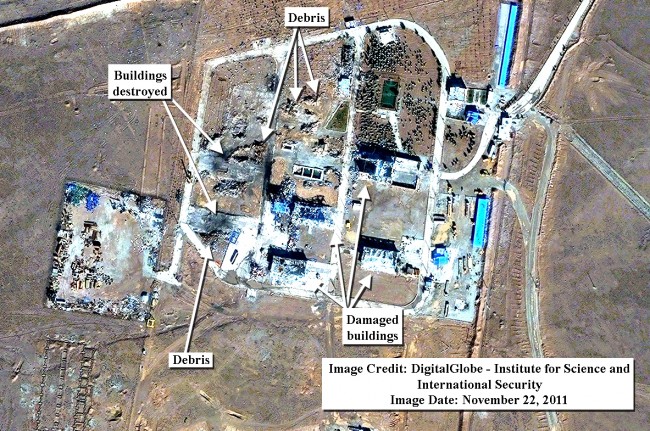 More information from ISIS about this image is available at its home page.

The explosion occurred shortly after Iran reported success with a test of the missile technology. It is seen as a big setback for Iran in terms of its ability to put a nuclear weapon payload on a medium range missile. A rocket with a range of 800 miles would be able to target many major cities in the Middle East.

Patrick Clawson, a national security expert at the Washington Institute for Near East Policy, told the New York Times on January 11 that the covert attacks on Iran's nuclear scientists appear to have two objectives.

First, they have a chilling effect on the nuclear workforce and they don't provoke a nationalist reaction in Iran. A military attack from the United States or Israel would surely create one.

Second, Clawson said, "it allows Iran to climb down if it decides the cost of pursuing a nuclear weapon is too high." 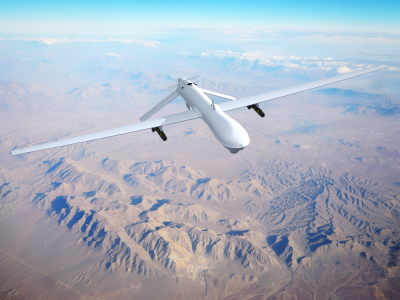 Gary Sick, a specialist on Iran at Columbia University, told the newspaper, however, that he does not believe the covert campaign will be effective in stopping Iran from its pursuit of a nuclear weapon. Sick said that he thinks "Iran will double down" in its efforts because it enhances their feelings of being under attack by the West.

Charles D. Ferguson of the Federation of American Scientists (FAS) told Reuters on January 17 that "such acts of terrorism" are unlikely to significantly delay or deter Tehran's nuclear work.

"The resulting climate of insecurity feeds ammunition to hardliners in Tehran demanding reprisals," he said.

U.S. government officials declined to discuss what security measures they will be taking to detect and deter possible retaliatory attacks by Iran on U.S. nuclear scientists. The U.S. Department of Energy is the largest employer of nuclear scientists in the United States, located at dozens of facilities across the country.

In Houston, Tex., this week, Gelareh Bagherzadeh, 30, a medical student who has a long history of speaking out on human rights issues in Iran, was shot dead under mysterious circumstances. Her purse and cell phone were still in her car, which had crashed into a building near her home.

Iran is continuing its threats to block the Straights of Hormuz in the Persian Gulf, adding a security premium to the price of oil. This move increases revenue for Iran and imposes costs on the U.S. economy. It is unclear whether or not Iran will actually take any military action, but even a single attack on an oil tanker could send oil prices skyrocketing.

Can Iran make a bomb?

It is also unclear whether Iran has the other capabilities to make a nuclear weapon including the metallurgy, trigger mechanisms, and delivery systems, e.g., missiles with a compact working warhead capable of hitting a specific target 800 miles away.

To develop a conventional uranium-based atomic bomb, Iran would have to produce output of about 90-percent U235. Weapons experts say that if Iran wants to produce weapons grade at that level, there is little to stop them, technically speaking, from doing so.

Experts believe that Iran will eventually be able to produce enough weapons grade material to build four or five atomic bombs.  However, at this time, while Iran is enriching uranium to 20%, it isn't clear that it has moved beyond that point to actually build a bomb.  On Jan 19 the Washington Post reported that the former head of the Israeli intelligence agency said Iran has "the resources and components" to build one.

"If the Iranians get together tonight and decide to secretly develop a bomb, then they have all the resources and components to do so," Amos Yadlin was quoted Thursday as telling the Maariv daily.

The newspaper added that it was not clear whether Yadlin, who retired in November 2010, was referring to the mechanical elements of a bomb, or that the Iranians have weapons-grade uranium, that is, enriched to 90% U235.

Iran's political objectives remain unshaken by the bombings of its nuclear scientists. Its clerical leadership is driven by a warped and paranoid world view that is bent on getting the West to recognize its role as a regional power. Unfortunately for Iran, its neighbors in the Middle East are as alarmed about Iran's nuclear ambitions as the United States and western Europe.

There is no workable roadmap at this time to convince Iran to stop its drive to produce a weapon. Ray Takeyh, a senior analyst at the Council of Foreign Relations, wrote in the Washington Post on December 9 that one of the reasons is that Iran's defiance of Western powers plays well in terms of domestic politics despite the activity of opposition parties. He wrote:

"A clerical oligarchy trapped in a mind-set conditioned by conspiracies and violent xenophobia paradoxically views both American entreaties and sanctions as an affirmation of its perspective.

Offers of diplomatic dialogue made in respectful terms are seen as indications of Western weakness and embolden the regime to sustain its intransigence.

Conversely, coercive measures are viewed as American plots to not just disarm the Islamic Republic, but also to undermine its rule. Armed with the ultimate weapon, the Islamists think, they may yet compel the West to concede to Iran's regional aggrandizement."

While the U.N. Security Council has imposed four rounds of economic sanctions against Iran for enrichment work, its members are divided on next steps. There is general agreement that enrichment to 20 percent exceeds the country's civilian needs, since Russia is providing the fuel for Iran's Bushehr commercial nuclear reactor.

Finding a path to bring Iran back into predictable diplomatic relations and to stand down from its pursuit of a weapons program remains a major challenge.