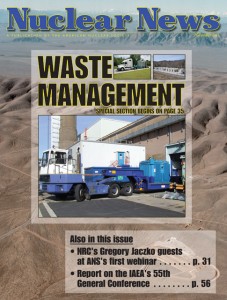 The November issue of Nuclear News magazine, which contains a special section on waste management, is available in hard copy and electronically for American Nuclear Society members (must enter ANS user name and password in Member Center). The special section contains the following stories:

The Tokyo Electric Power Company (TEPCO) became a household name a decade ago as the operator of the Fukushima Daiichi nuclear power plant, center of the largest nuclear accident in a...

Nuclear power is an important component in the fight against climate change, but independent regulation is needed to gain the public’s---and governments'---trust, according to a March 6...