Radiation and Reason: A Visit to Tokyo and Fukushima

I, Akira Tokuhiro, recently traveled to Japan to meet Wade Allison (professor emeritus of physics, Oxford University, UK) and David Wagner (Tokyo-based risk communication expert and consultant). A number of concerned scientists had expressed interest regarding the Fukushima accident. Specifically, there was concern regarding the significance and impact in the nuclear world and also the plight of the victims, especially the evacuees and the workers at the plant.

We wanted to get a message out regarding radiation exposure and health effects and saw a need for a public forum. The unequal standards for radiation exposure and fear, as discussed in Wade Allison's book, Radiation and Reason, were something we felt needed to be put out into the public domain. At a minimum, we wanted to stir up some discussion, maybe a heated debate.

We hoped to initiate a discussion within the media and public and to elicit feedback regarding our message that prescriptive radiation levels (e.g., the International System of Radiological Protection's, the Japanese government's) are overly cautious and not scientifically based at lower levels. 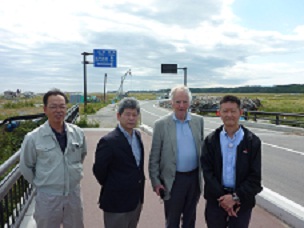 (from left) Two Minami-Soma Hospital hosts, along with Wade Allison and Akira Tokuhiro. View toward plant from coastal road bridge near Namie village. The bridge is located 3-4km from Fukushima nuclear power plant.

Upon arriving in Japan, Allison and I went straight to Fukushima. Through contacts that Allison had made through an exchange program, we were able to connect with high school teachers and a student from Fukushima City and Soma High Schools.

A hospital in Minami-Soma arranged for us to take a tour of some of the damaged sites and we were able to get within 3 km of the Fukushima Dai-ichi plant itself, much closer than we had anticipated. 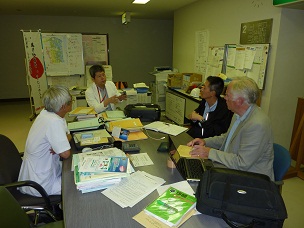 Tokuhiro and Allison, at Minami-Soma Hospital, during discussions with two senior doctors who monitored radiation exposure of evacuees.The hospital is located 25km north of the Fukushima nuclear power plant.

Through David Wagner, who sometimes writes for the Huffington Post, we were able to speak at the Foreign Correspondent's Club of Japan (Japan Times report), as well as at the American Chamber of Commerce in Japan (slides).

The ACCJ invited several foreign Chambers of Commerce, including the British and the Canadian Chambers. The ACCJ forum can be found on YouTube (ACCJ-Food Safety: October 3, 2011). In addition, we were interviewed by reporters from the Wall Street Journal/Dow Jones, Financial Times, Nikkei Business Page, and a video-based blog in Japan. 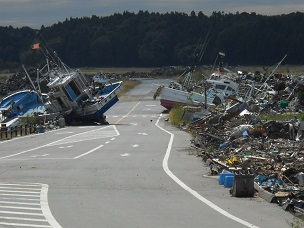 View taken from a coastal road bridge near Namie village. The bridge is located 3-4km from nuclear power plant.

The public had a spectrum of views based on various news releases; some saying that our viewpoints were completely wrong. But certainly radiation, whether it's from a medical isotope or a damaged reactor in this case, does not choose "customers."

At the very least, we put the discussion out there. Those who read between the lines may be alarmed by our assertion that the ICRP standards for exposure should be reviewed. Nonetheless, some skeptics have now reconsidered. This is good for us. Others were downright against the idea of reconsidering exposure levels. These varying reactions are to be expected. It's always good to have the debate and to express points of view and exchange information. 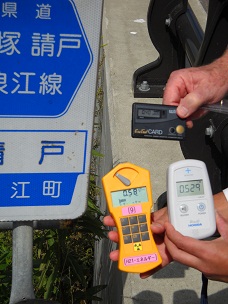 Allison and I had a different sense and understanding of the situation. For me (Tokyo-born, U.S. educated), it was sad to see convenience stores abandoned and parking lots that were empty. Convenience stores are really the livelihood of the community in Japan. This is something that will stay with me for a long time.

One of the days as it rained, I wondered about exposure from fallout. My thoughts were not of concern for personal safety, but as I walked through the streets of Tokyo, I noticed all of the surfaces where fallout could be settled.

I really got a sense of the enormity of what happened in Fukushima, and to the nearby regional mountains, rivers, and forests. We visited Fukushima City, Iitate Village, Minami-Soma, all places with partial to full evacuation. We also visited Fukushima High School, where fallout has been measured by the students. Overall, I am still digesting this experience.

Our only expectation for this trip was to have these public forums and to get the message out that the prescriptive exposure rates are overly conservative. We tried to put things in perspective. There is a large psychological element, a great fear of radiation. Allison's book is appropriately titled Radiation and Reason. We don't often discuss radiation exposure and reason in the same sentence. We got the message out. In this regard, we accomplished our objective. 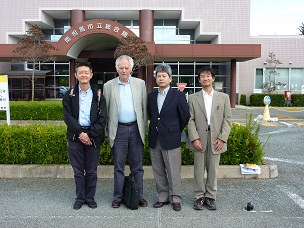 Many people supported us. David Wagner, the risk-communication expert, was instrumental. James Hollow, a former student of Allison who works in Tokyo, collaborated with us. Mami Mita, an independent consultant, was instrumental in getting Allison's book published in Japanese.

This is a good start. These people on their own time believed in the three of us and helped us to have a successful first trip to Japan. You have to understand that Allison, Wagner, and I had never met prior to this trip; we got acquainted through a social network and blogs.

The Fukushima accident was a global event of Internet proportions. There is something to be said about social networks bringing people together with a shared concern for what has happened to the people of Japan.

We are digesting our experiences and looking at the responses we have received. We will certainly look at the response in the media. We hope to return and reemphasize our message in March 2012, during the first anniversary of the tragic events.

A March 26 guest essay at the BBC by Allison, just two weeks after the Fukushima earthquake:  http://www.bbc.co.uk/news/world-12860842

Videos of presentations to ACCJ on October 3, 2011.

The Tokyo Electric Power Company (TEPCO) became a household name a decade ago as the operator of the Fukushima Daiichi nuclear power plant, center of the largest nuclear accident in a...