A Nuclear Opponent from Half a World Away

Vermont Law School (a private institution) is known as a leader in environmental law.  Students at the school have an Environmental Law Society and an International Law Society, and on September 30 these societies hosted a public meeting that featured Vaishali Patil, a woman from India who is an "environmental activist" and nuclear power opponent.

Meredith Crafton, a student, introduced Patil. I first encountered Crafton a few years ago when members of the Safe and Green marched during a winter campaign to Montpelier, Vermont's capital, and stopped at the law school for the night. I stopped by the law school that night to take in the activities and met Crafton.

During the September 30 meeting that featured Patil, everyone in attendance introduced themselves, and Crafton said that she had come to the law school to work against the Vermont Yankee nuclear power plant. I also was at the meeting and introduced myself, as I always do at anti-nuclear gatherings, to eliminate the possibility of a charge of "industry spying." 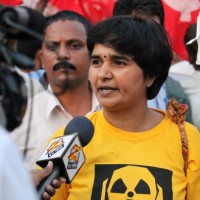 Patil, a compelling presence, spoke for the entire hour in the classroom that had been provided at the law school. She spoke right up until the time that students for the next class in that same room arrived, allowing no time for questions. Speaking from notes on a piece of paper the size of an index card, she gave "red meat" to the audience of about 30 students and three or four older people. Her talk was similar to her speech on this YouTube presentation from earlier this year.

Patil's topic was the Jaitapur nuclear plant in India, which will consist of six 1650-MWe Areva plants. There are also 18 fossil power plants proposed for the same area. The region is heavily dependent on agriculture and fishing, and the land for the power plants was originally farmed, but had to be taken by eminent domain. Patil told a long and compelling story about the process of land taken for public use, and the many levels of appeal and the struggle to get compensation.

The Indian farmers in the area are against the use of coal, so the government said, "Look at the United States as an example, with its many nuclear plants." To prepare themselves to battle the Jaitapur project, local opponents traveled to the site of India's first nuclear plants at Tarapur (two boiling water reactors, 150 MWe each, commercial start in 1969) and talked to local residents about the effects of the plants. According to Patil, the travelers heard horror stories from the residents about accidents that are kept secret, high infertility, aborted births, use of contract workers only, contaminated seawater preventing fishing, and radioactivity in a 200-km radius.

There have been contentious public hearings about the Jaitapur plants. With the help of nuclear activists from abroad, the local opponents-characterized as "farmers"-filed more than 1000 objections. Generally, she said, there is public fear of radiation in India, with special concern over its effect on the mango crop, which is an important economic export. There had been a previous bad experience for farmers and mangos from the use of pesticides, and so they don't want the same thing happening with nuclear.

Whether nuclear power is good or bad is another issue, Patil said. She claimed that the world is trying to turn India into a uranium market for foreign uranium. "The U.S. people are against nuclear power," she said. In addition, she charged that approval for the plants in India was signed quickly when President Sarkozy of France visited the country. "We feel like guinea pigs," she said in closing.

After the talk, the audience gathered in the hallway for refreshments and conversation. Then the older people and four or five students went to a lounge adjacent to the classrooms. In the lounge, one of the older people invoked the mass marches against the Seabrook nuclear plant a generation ago. Patil said, "We have to go to the streets at some point" and she passed around a clipboard for signatures for those who want training for the street demonstrations, or to be "legal observers." She also announced that there would be a demonstration at the Vermont Yankee plant on October 13, complete with puppets and the presentation of a "Trojan Cow."

Howard Shaffer has been an ANS member for 35 years. He has contributed to ASME and ANS Standards committees, ANS committees, national meeting staffs, and his local section, and was the 2001 ANS Congressional Fellow. He is a current member of the ANS Public Information Committee and consults in nuclear public outreach. He is coordinator for the Vermont Pilot Project. Shaffer holds a BSEE from Duke University and an MSNE from MIT. He is a regular contributor to the ANS Nuclear Cafe.