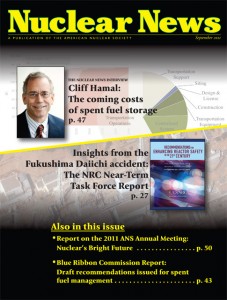 The September issue of Nuclear News is available in hard copy and electronically for American Nuclear Society members (must enter ANS user name and password in Member Center). The issue contains a variety of features, including: 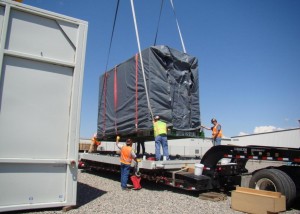 This month’s issue of Nuclear News focuses on the role of probabilistic methods in assessing and mitigating the risk of adverse events at nuclear plants and facilities. It’s a timely topic...

As a knowledge manager for the 2018 Utility Working Conference, I had many opportunities to interact with nuclear utility leaders. The discussions often centered around finding innovative ways...

It’s like clockwork. In June of every year, the American Nuclear Society brings in a new elected leader for the next 12 months. I’m Steve Nesbit, the latest in a line of distinguished (and...

The Nuclear Regulatory Commission has begun its review of GE Hitachi’s application to renew the license of its Morris Operation, the spent nuclear fuel storage facility in Grundy County,...