Argonne engineers recently proved that a new version of the lab’s proprietary SuperGel is capable of decontaminating surfaces that had stymied experts in the past. The new gel offers the following benefits:

It is more versatile and effective at decontaminating surfaces in a nondestructive way.

It decontaminates surfaces with decades-old radioactivity, areas that experts believed were impossible to fully treat and fix.

It performs better or is more convenient than other treatments. 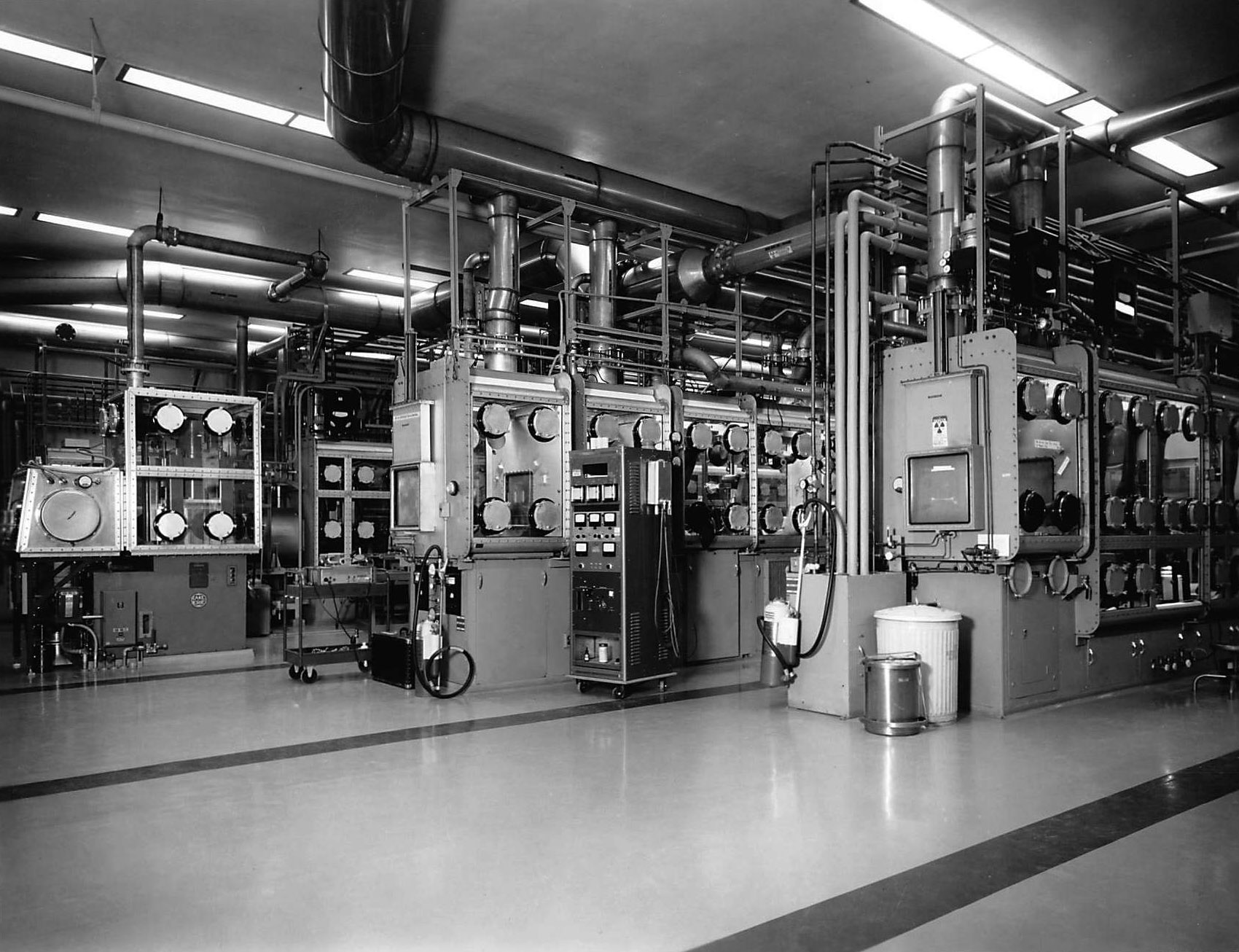 The original Argonne plutonium fuel fabrication facility, seen here, operated from 1959 to 1973. New Brunswick Laboratory later operated the facility for its nuclear materials mission, using the area for the receipt and storage of materials.

Argonne materials engineer Michael Kaminski first developed the method, known as the Argonne SuperGel system, in 2003. The system contains engineered nanoparticles combined with a polymer gel. When applied to porous surfaces, the gel isolates and traps radionuclides. The system became a hit after it was released and was licensed by Environmental Alternatives Inc. after it proved effective at removing 80 to 100 percent of varying contaminants on porous surfaces, which are notoriously hard to clean.

The original patented Argonne SuperGel formula has been independently tested by the Environmental Protection Agency and by other laboratories. It performed as well or better than comparable products on the market, of which there are few, Kaminski said. The EPA study in particular found that, after applying the SuperGel on newly contaminated areas over a 90-minute period, the gel was effective at removing around 71 percent of cesium. The exact amount of removed contamination ultimately depends on the number of applications, the radioisotopes involved, and the characteristics of the contaminated structure, including its age, material, and whether it is painted or not.

“Tests were done on the Argonne SuperGel with new contaminated samples, because at the time the system wasn’t designed to handle old forms of contamination but to function as a stopgap for terrorism, to mitigate the effects of new contamination,” Kaminski said.

This past year, Kaminski developed a new version of the gel, which can expand its applications in the management of low-level radioactive waste. The new formula can dissolve and sequester a greater range of radionuclides, including radioactive strontium, cobalt, americium, plutonium, and uranium, in addition to cesium. Kaminski performed a recent series of tests at the former New Brunswick Laboratory, a decommissioned facility located at Argonne that was once devoted to the development of nuclear reference materials, where the reformulated SuperGel demonstrated its effectiveness at removing plutonium contamination from the floor of a portion of the building. The lab’s high-bay area has since been converted for equipment testing, but hotspots remained from legacy plutonium work.

Kaminski originally created the Argonne SuperGel as a fast-acting emergency response tool to help the nation quickly respond to a “dirty bomb” or other radioactive dispersal device. Standard responses to these emergencies are slow and expensive, but with the Argonne SuperGel, responders can react more quickly. One distinguishing feature is its ability to decontaminate while preserving the surface of structures. This means monuments or buildings, commonly made of porous materials, do not have to be defaced in order to remove contaminants.

The porosity of concrete, brick, tile, marble, granite, asphalt, and the like has made it challenging for decontamination experts to remove radionuclide ions (e.g., actinides, lanthanides, and fission products) from surfaces. Porosity gives radionuclide ions room to penetrate below the surface. According to Kaminski, before he developed the Argonne SuperGel, there were no effective techniques for removing radioactive contamination from porous surfaces. As a result, because they could not be cleaned, contaminated objects were typically demolished.

“By addressing this challenge, the original Argonne SuperGel system quickly filled a technological gap within the market,” Kaminski said.

Kaminski began developing a new formula for the Argonne SuperGel within the last several years to investigate whether the system could treat older structures. Older sites host contaminants that decommissioning and decontamination experts have historically viewed as permanently “fixed,” meaning they have been absorbed onto the surface and can no longer be removed by a rag or chemical wipe or other chemical decontaminants.

“Any contamination that is absorbed into a surface like concrete is fixed by definition, but in environmental restoration of urban surfaces, we recognize a small window where the contamination can be considered ‘fresh,’ although it is fixed, and can still be removed by something like the Argonne SuperGel,” Kaminski said. Kaminski tested his new formula at the former New Brunswick Laboratory (NBL).

Historical sites like the NBL present their own unique set of challenges to decontamination experts because contamination, if left alone over time, becomes trapped either by chemically bonding to highly selective sites on the surface or by converting into more insoluble forms. As a result, with time contaminants become more difficult to remove, apart from physically removing the material hosting the contamination.

For sites like this, decontamination experts typically rely on destructive measures like scabbling—the process of abrasively scraping the surface of the structure—and disposing of what is left over as low-level waste. The process can undermine the overall integrity of the structure, potentially rendering it useless.

“There are cases in which a structure requires demolition during decontamination. In these cases, if experts can decontaminate it with the SuperGel, one may not need to fully demolish it, which may save substantial cost,” said Kaminski.

Though contamination at the NBL had been fixed for several decades, using the new Argonne SuperGel formula, Kaminski removed legacy plutonium below the release limit in 13 out of 15 spots tested. And though Kaminski and his team designed the formula to handle more recent contamination, these results suggest that the Argonne SuperGel system can function very well on older, legacy sites.

“We had tremendous success using the Argonne SuperGel at the laboratory,” Kaminski said. “The D&D community usually assumes these kinds of contaminated spots, some of which are probably 40 years or older, can’t be cleaned, but we’ve shown that they can be decontaminated while still preserving the structure.”

Experts can not only use the SuperGel technology to decontaminate structures for unrestricted access, but they can also use it to reduce radiation levels so that emergency operations can resume and liquid radioactive waste can be converted into stabilized solids suitable for direct disposal. Environmental remediation companies around the world can apply it to essentially any site where contamination on porous (e.g., concrete, asphalt, limestone, granite, painted surfaces) or nonporous (metal, glass, laminated surfaces) surfaces persists, and where demolition is not required and undesired, like in an active, newer facility following an accidental spill.

“In the case of an accidental spill, no one wants to demolish the building, so decontamination to regulation levels is often preferred,” Kaminski said. “In these scenarios, experts will try to clean the surface first, but if that doesn’t work, they will scrape the surface through various means to physically remove contamination and minimize damage to the structure. Here, the Argonne SuperGel can benefit and save costs because it is designed to do just that type of thing without undermining the structure.”

The Argonne SuperGel technology also can help experts collect radioactive contamination samples if radiological contamination arose. In such a scenario, experts in nuclear forensics can use the gel, which collects radioactive materials, to recover the radionuclides needed to determine the composition of the contaminants and where they came from.

The original Argonne SuperGel’s two key components behave similar to absorbent materials found in disposable diapers. When exposed to a wetting agent, the polymers in the gel form a kind of structural scaffold that allows the gel to absorb an incredible amount of liquid. A sequestering agent or engineered nanoparticles contained within the gel act as a sink or trap for the contaminant ions absorbed from the surface.

To use the system, skilled workers follow a simple, three-step process: application, reaction, and cleanup. The first step is to apply the gel wetted with the ionic wash solution using commercially available spray equipment. The ionic wash solution in the gel causes the radioactive molecules that are bound to the surface of the material to re-suspend in the pores. The super-absorbent polymer gel then suctions the radioactivity out of the pores, and engineered nanoparticles or solid sequestering agents help fix the radionuclides within the gel.

The second step is the reaction step, during which responders leave the Argonne SuperGel exposed to the contaminated surface, typically for 1-2 hours. During this period, the aqueous gel absorbs contaminating ions from the surface, including actinide, lanthanide, and/or fission product ions, fixing them in the engineered nanoparticles that sit within the gel.

The final step is the cleanup, during which responders remove the Argonne SuperGel from the surface using a wet vacuum, leaving behind a nondestructively treated surface containing low levels of residual radioactivity. Responders can then remove contaminants trapped within the gel, dispose of them, or analyze them forensically.

The new formula works much in the same way as the original, by fixing and stabilizing radionuclides to mitigate environmental release and re-adsorption of the radionuclides to the surface. The new version contains another mild additive that promotes the dissolution of metal scale (e.g., rust) and can bind to other radionuclides on the periodic table such as radioactive strontium, cobalt, americium, plutonium, and uranium.

“The new formula is all-around better. It is still designed for new contamination but also seems to function very well on older legacy sites,” Kaminski said.

The key benefit of both formulas is that they are nondestructive. Today, specialists have very few nondestructive options for removing contaminants from concrete, brick, and other porous surfaces. Most known procedures are designed for nonporous surfaces, such as metals, and involve the use of harsh acids. But acidic materials can destroy many porous materials and are toxic, meaning they can only be used in carefully controlled and contained environments.

The new formula is good news for D&D experts seeking to decontaminate but preserve the structure of buildings and monuments. By preserving these structures, we can create new uses for them and minimize the amount of waste that ends up in nuclear waste sites.

“With a liquid, you have to spray it on, let it sit, and then soak up the liquid, which takes a while to do,” Kaminski said. “With the Argonne SuperGel everything is contained within the gel, and gel is much easier to clean up than a liquid. You can easily vacuum it up, and all your contaminants stay within the gel. You also don’t have to wait as long with the gel to achieve similar levels of decontamination."

The Argonne SuperGel project was funded by the U.S. Department of Defense under the auspices of the interagency Technical Support Working Group (TSWG)—Combating Terrorism Technical Support Office. The new formula is available for licensing; contact Mike Kaminski at kaminski@anl.gov for more information.