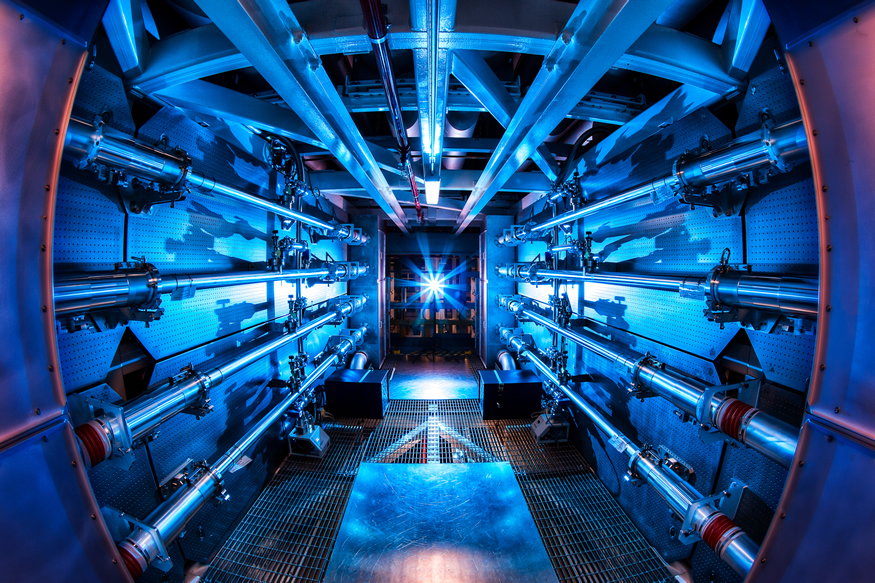 On December 13, however, the focus was on LLNL and its achievements. Following the first announcement of a fusion energy yield of 3.15 megajoules (MJ) from a fuel capsule that received 2.15 MJ from NIF’s 192 high-energy lasers, a panel of six LLNL leaders described their role in work and took questions from the media. Among them was Tammy Ma, lead for LLNL’s Inertial Fusion Energy Institutional Initiative, who said that the achievement of fusion ignition and scientific breakeven “demonstrates the basic scientific feasibility of inertial fusion energy and sets the road map for us to move forward to even higher gains and toward fusion pilot plants in the coming decades.”

What will it take? NIF pulled 300 MJ of electricity from the grid to power its lasers and delivered 2.05 MJ to the fuel capsule for the record-breaking shot. Ma was asked how inertial fusion can be considered a potential energy source when the experiment required 100 times the energy that was ultimately released. She explained that the considerations that went into building NIF as a scientific facility “are a little bit different than if you're going to build a fusion power plant. For example, maximizing the efficiency of every single component is not necessarily the most important thing.”

Also, NIF “is now over 20 years old,” Ma said. “The technology inside the NIF is ’80s and ’90s technology, and things have progressed quite a lot since then. We have new laser architectures that can not only run at rep rate but are far more efficient, up to something around 20 percent wall plug efficiency. There have also been enormous advancements in target fabrication, new materials, computation and simulations, and the application of machine learning. So it's a really exciting time because we get to incorporate all of these emerging technologies with this new scientific understanding that we've developed to really push toward inertial fusion energy.”

How could they get there? “Right now there are a number of different approaches to target physics that could actually get us to high gain and high margin,” Ma said. “All of those have slightly different drivers. For what we're doing on the NIF, we use high-energy lasers, but there are designs using heavy ions, pulsed power, etcetera. . . . Really where we are right now is at a divergent point. We've been very lucky to be able to leverage the work that the NNSA has done for inertial confinement fusion. But if we want to get serious about IFE, we are at a point where we need to invest in those technologies.”

“What we're doing now with the Department of Energy is actually embarking on doing these integrated system studies with our best information about technology as it's evolved today and to figure out where the biggest gaps are, where we need to invest, where we need to buy down risk, and that will be an ongoing activity for quite a few years. But with this bold decadal vision, we are really trying to accelerate and put together these designs to see what is the most viable, feasible design and all come together to work on it.”

One company’s plans: Edward Moses, who spent almost 30 years of his career at LLNL, including as the lab’s principal associate director for the NIF and Photon Science Directorate from 2007 to 2013, is a leader of Longview Fusion Energy Systems, a company that took the opportunity to issue a press release on December 13 announcing “plans to build the world’s first laser fusion power plant.”

“Longview’s power plants will combine the NIF’s laser fusion breakthrough with modern, efficient lasers and a patented design to replicate these conditions several hundred times a minute—similar to the repetitive pulses in a car engine but delivering over one million horsepower,” according to the company’s press release. “With plant groundbreaking planned in five years, this revolutionary energy source will play a significant role in meeting the global growing need for clean energy. . . . Longview has been working with a broad partnership of U.S. industry, utilities, academia, national labs, and strategic investors over the past 18 months to design a power plant based on the physics that has now been proven at the NIF.”

While at LLNL, Moses was involved in the Laser Inertial Fusion Energy (LIFE) project, which was announced In November 2010 at the American Nuclear Society’s 19th Topical Meeting on the Technology of Fusion Energy and was described in the January 2011 issue of Nuclear News. LIFE was intended to lead to a demonstration reactor starting up in the 2020s and a commercial reactor in the 2030s. At the time LIFE was announced, a National Ignition Campaign was underway, which ultimately ended without reaching the goal of ignition by the end of fiscal year 2012.

Federal funds to fusion pilots: The DOE issued a fusion pilot plant design funding opportunity announcement on September 22, which closed to applications at midnight on December 15. That FOA offered up to $50 million to for-profit companies—possibly teamed with national laboratories, universities, and others—to meet major technical and commercialization milestones leading to a pilot fusion power plant design that “should demonstrate a significant amount of net fusion electricity (e.g., >50 MWe) for >3 continuous hours . . . with a timely path to one full power year . . . , at a total capital cost that can attract private funding.”

The DOE expects to bestow between three and five awards ranging from $5 million to $25 million. Recipients would have 18 months from the award date to deliver preconceptual designs and technology roadmaps.

Importantly, the FOA is open to all fusion confinement concepts, including inertial, magnetic, and hybrid confinement concepts. As energy secretary Jennifer Granholm confirmed during the DOE’s December 13 press conference, “We are just looking at the best proposals that come in, and hopefully we'll have a decision on that first $50 million early in the new year.”