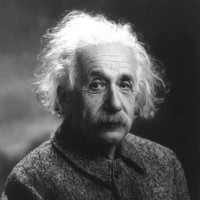 Einstein is most well-known for his theory of relativity (e=mc²), but did you know these lesser-known facts about everyone's favorite crazy-haired physicist?

Apparently no matter how smart you are, socks inevitable will get holes in them. For this reason (seriously), Einstein never wore socks. He even boasted to his friends that, while a student at Oxford, he got away with not wearing socks.

I have to disagree with the professor here. I love socks, as long as they're not boring. Every day I try to match my socks to my outfit in a subtle way, but nothing cheers me up like wearing a pair of socks covered in Corgis wearing multi-colored bandanas.

When Einstein was a child, he was slow to learn speech. According to his biographer, Einstein stated that he did not begin to talk until at least age three.

I diverge from the good professor yet again. I began speaking at what I assume was a normal age (at least, my parents haven't told me otherwise), and unfortunately haven't stopped since.

Einstein's mother was a pianist who wanted him to be involved with music, so she signed him up for violin lessons when he was 5. Although Einstein initially disliked his lessons, after hearing some Mozart sonatas, he did an about face and fell in love with the violin, continuing to play up until a few years before his death.

Like many children, I was also signed up for music lessons at a young age, although mine was piano at the age of 7. Unlike Einstein, I loved the piano from the moment I started my lessons, and continued through the middle of high school, after which I transitioned to being involved with marching band, and then took up the bassoon and symphonic band in college. It's not the most conventional musical heritage, but it was a fun!

After he graduated from Zürich Polytechnic and was awarded the Federal Polytechnic teaching diploma, Einstein had a difficult time finding a teaching job, anywhere. A frustrating two years later, Einstein landed a job at the Swiss Patent Office where he would spend his days examining patents related to the transmission of electric signals and electrical-mechanical synchronization of time. It was during his time as an examiner that Einstein would develop many of his famous theories, perhaps inspired by the patents he was reviewing.

Just like Einstein, when I left school I spent a frustrating 10 months searching for a job, and ended up at the U.S. Patent and Trademark Office as a patent examiner. Unlike Einstein, the patents I examined covered refrigeration, heat exchange, and automatic temperature and humidity regulation. Also unlike Einstein, I did not develop any groundbreaking scientific theories. Alas.

Unfortunately for Einstein, he was bad at sailing. Really bad. So bad that his neighbors in Long Island would frequently have to help Einstein right his capsized boat. But that never stopped Einstein from hitting the water again! Neither did his inability to swim, apparently.

I do not know how to sail, but I have enjoyed it the few times I have been on a boat with a friend. I do, however, know how to swim, which I feel like is a crucial skill if one is capsizing their boat frequently.

Of course he was born on Pi Day. What did you expect?

Advanced reactor coolants, consent-based siting, and offshore nuclear production of hydrogen are just a few of the topics included among the 74 nuclear science and technology projects awarded...

A bipartisan bill to ensure that U.S. universities are equipped to play a key role in supporting the deployment of advanced nuclear technology and applications has been passed by the House...

A bipartisan group of legislators has introduced a bill to invest in university nuclear science and engineering infrastructure, establish regional consortia to promote collaboration with...

More than $61 million in funding has been released for advanced nuclear energy technology projects in 30 states and in the U.S. territory of Puerto Rico, the Department of Energy announced on...

The Biden administration’s fiscal year 2022 budget sent to Congress last week would, according to the Department of Energy, move the United States toward net-zero carbon emissions by 2050....