Did you know that nuclear technology has been used in space almost since the beginning of human exploration in space?  That's right - nuclear energy has been used to power science experiments, satellites, and space probes.  It may even be used someday to propel vessels with people on board to other planets.  Let's take a look at three basic kinds of nuclear space technology!

This kind of space power has a long name; Radioisotopic Thermal Generator.  This really just means that radioactive materials, which get hot when they decay, are used to generate electricity directly using something called the "thermoelectric effect."  This effect is simply the generation of voltage when two different kinds of wires are connected to each other and heated up.  The power produced isn't much, but it can be produced reliably for a fairly long time.  That's why this source is good for very long flights - like that of the Pioneer probes that photographed Jupiter in the 1970's. 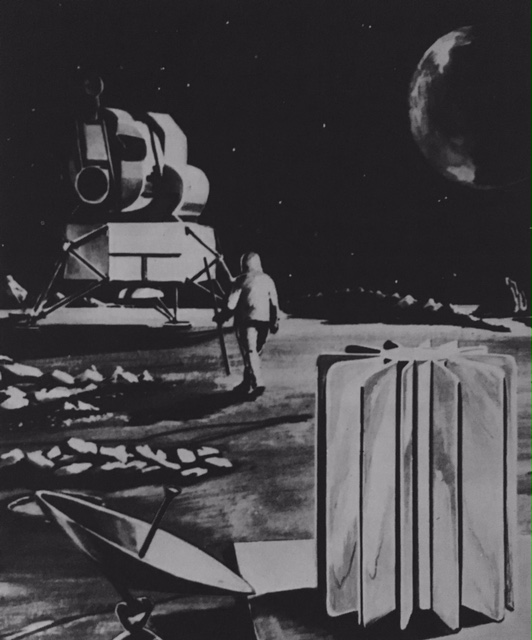 The Apollo moon landing missions from Apollo 12 on carried a small SNAP-27 nuclear electric generator to power the science stations that were left on the moon. These stations contained various sensors which radioed data back to scientists on the earth. The little SNAP-27 generators, one of which is seen here in the right foreground, provided about 60 watts of power and were expected to last about five years. All of the science stations, known as "ALSEP" (Apollo Lunar Surface Experiment Package) were turned off from Earth in 1977 after the end of the Apollo program. 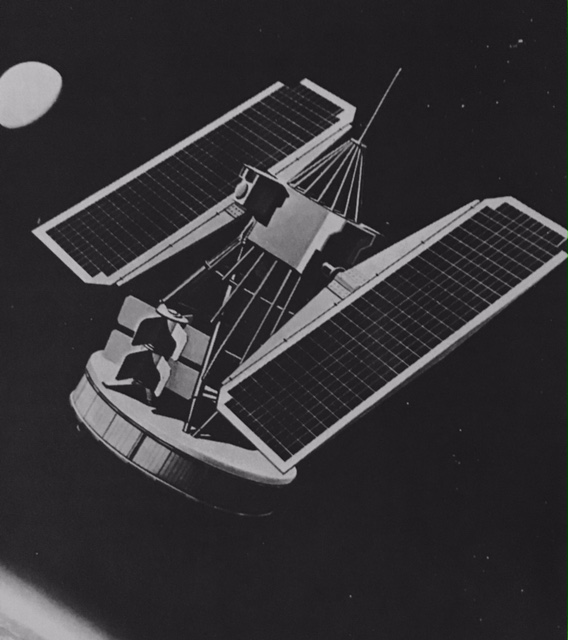 RTG devices have been used on satellites orbiting the Earth too. Here we see a weather satellite, used to photograph clouds and storm structures such as hurricanes. This satellite, called Nimbus-B, had solar panels for its main power but also had two 30-watt SNAP-19 nuclear RTG's (which are seen stacked on each other on the disc shaped portion of Nimbus-B.) These RTG's were only expected to last a year; early weather satellites such as this one, launched in the 1960's, typically didn't last too long. Today's satellites are much better.

Some jobs are just too big for RTG's; they require more power than an RTG can provide and might have to do it for a long time.  This is where reactors come in; like reactors used in power plants here on the ground these carry out nuclear fission in a controlled chain reaction.  The heat generated is then used to produce electricity.  This kind of power system would be useful on a long manned mission, such as a flight to Mars where astronauts need to keep food and water and need to communicate often with Earth - which uses more power than little RTG's could reasonably provide. 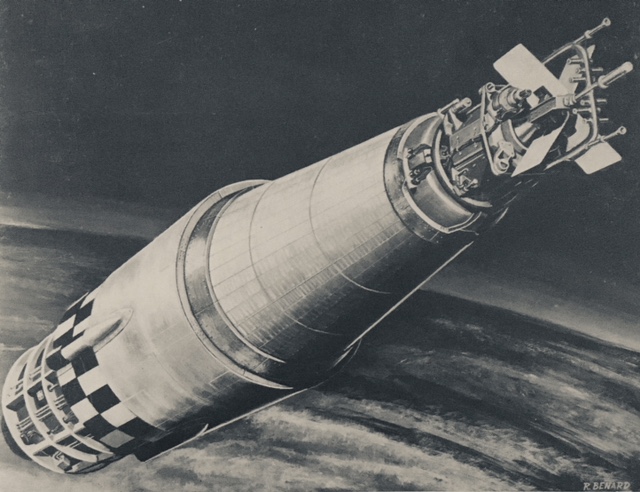 The first reactor power system launched into space was a SNAP-10A prototype, which flew in 1965 and is seen here. This system used a liquid sodium coolant which was pumped through the reactor to carry the heat; the coolant then passed through a bank of power converters that worked just like RTG's. 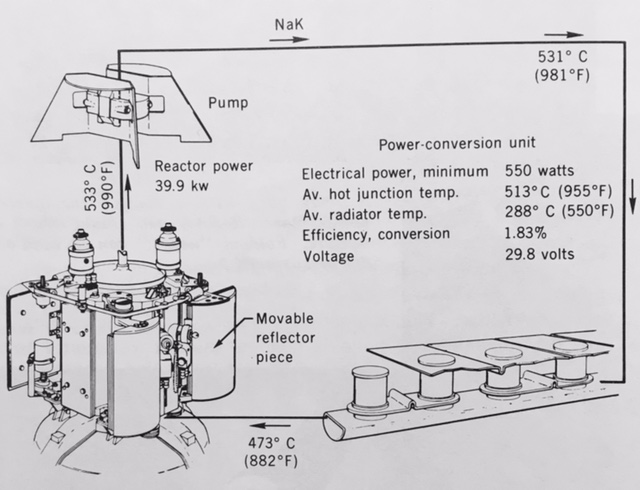 This diagram shows how the SNAP-10A worked. The power converters are at the bottom right corner. Although the space prototype failed after about 43 days due to a bad voltage regulator in the spacecraft a twin version operating on the ground ran for over a year. "NaK" is a sodium-potassium coolant - pronounced "NACK!"  The name comes from the elemental symbols for sodium and potassium. 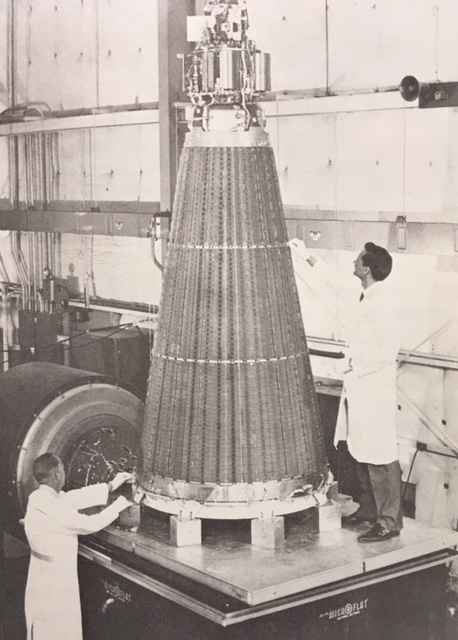 Here we see SNAP-10A before being launched. It's smaller than you might think! The reactor used here only produced about 500 watts - roughly that of a hair dryer - but that's enough to run systems on a small space probe or satellite. Later versions, most of which were never built, were intended to be much more powerful. The research done back then is being reviewed as plans for space travel are coming back.

It's even possible to use nuclear power in rockets to move space craft.  The idea here is to put a gas into an extremely hot nuclear reactor, and then let the gas escape into space through a rocket nozzle.  The gas will push the spacecraft.  Normally rockets use chemical fuels, but carrying enough fuel along on a very long mission gets pretty clumsy.  A reactor is built with all the fuel it will ever need right inside of it; it doesn't need giant tanks for fuel and oxidizer.  That means that all a nuclear rocket needs is compressed gas to push out the back.  This is a lot easier and more compact to store.  In the illustration at left we can see how one of these might be built; the rocket's body (containing astronauts and experiments and food) is above out of the picture.  Spherical gas tanks are near the rocket base, while the reactor is in the cylindrical "can" just above the nozzle.  These rockets might have less thrust than big chemical rockets like the Saturn-V or the Space Shuttle used, but out in space where there's no atmosphere to slow down a ship you need less anyway.  Most plans have pictured using large normal rockets as first and second stages to get a space craft either into orbit or just out of Earth orbit, and then using the nuclear rocket to get the ship and crew where it's going and then back to Earth. 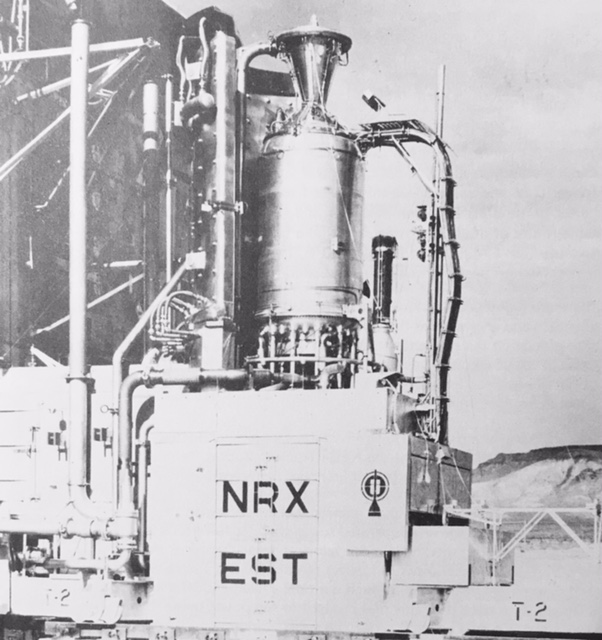 Nuclear rocket engines were built and tested on the ground in the 1960's. This example, NRX, was tested at the Nevada Test Site and had its exhaust pointing straight up into the sky.

Nuclear technology is again being discussed very seriously for a manned mission to Mars.  Such a flight can really only be one of two things - a very long flight, which will require power for a long time to support the crew and all of its needs, or else it could be a short flight which would require a very large rocket power to fly quickly to Mars, slow down into orbit, and then fly back to Earth.  For the long flight, nuclear power generators are really the only answer.  For the very fast but short flight, nuclear rocket engines are about the only way to get the job done without building a giant ship up in space.  It might come out that a manned Mars mission would use both - a nuclear system for electric power AND a nuclear rocket for propulsion.   Whatever the case, though, for missions way far out into space where solar panels don't work or where you need lots of long term power, nuclear technology is the best answer.