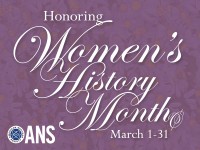 Women's History Month is a time to reflect back on the contributions of women, and to look forward to their potential. In nuclear science, there is a rich history of female physicists and engineers contributing to our field along with their male counterparts. From the radium to radioimmunoassay to reactors, women have defied the odds to become leaders in all areas of nuclear science and engineering.

While cliché, I truly feel as if I am standing of the shoulders of giants as a young woman in nuclear engineering. The sky is the limit for women in science today, because the women that came before us blazed a path for us to succeed. No longer are we the only woman in the room (well, usually at least), no longer do we have to give up a fulfilling family life to pursue a career in science, and no longer must we continually fight to have our voices heard. With a respect for the past also comes an excitement about the future. There are many incredible women leaders and rising stars across the field of nuclear science and engineering, from industry, national labs, and academia. And someday the leaders of today will be the shoulders for the next generation to stand on.

As a conclusion of Women's History Month, I highlight Dr. Elda Emma Anderson. You can see the three previous articles honoring this month:

Dr. Elda Emma Anderson was a physicist, member of the Manhattan Project, and pioneer of health physics. She was born in Wisconsin on October 5, 1899.

Dr. Anderson earned a Bachelor of Arts (AB) from Ripon College in 1922, and went to the University of Wisconsin-Madison to earn her Master of Arts in physics, 1924. After completing her masters, she taught in high schools and colleges around Iowa and Wisconsin, including a position as the dean of physics, chemistry and mathematics at Estherville Junior College in Iowa (now part of Iowa Lakes Community College).

While maintaining her job as dean of physics, Dr. Anderson completed her Ph.D. from the University of Wisconsin-Madison in 1941, with the dissertation "Low energy levels in the atomic spectra Co VII and Ni VIII". Shortly after finishing her Ph.D., she joined the Manhattan Project at Princeton University's Office of Scientific Research and Development in New Jersey. By 1943, she was moved to Los Alamos Scientific Laboratory in New Mexico to study fission. Working in the cyclotron group, Dr. Anderson focused mainly on spectroscopy and neutron cross section measurements. Her work led her to produce the lab's first sample of uranium-235.

Although she returned to Milwaukee-Downer in 1947, Dr. Anderson was very interested in the new field of health physics. She left Wisconsin in 1949 to move to Oak Ridge, Tennessee and devote the rest of her life to health physics. At Oak Ridge National Laboratory, she became the first chief of education and training for the Health Physics Division.

Dr. Anderson was very active in establishing health physics as an official discipline, helping to establish the Health Physics Society in 1955 and the American Board of Health Physics in 1960. Her collaboration with faculty at Vanderbilt University in Nashville, Tennessee led to the creation of the graduate health physics program. She was a fellow of the American Association for the Advancement of Science and various honor societies such as Sigma Xi and Sigma Delta Epsilon. She developed international courses in health physics, including ones in Stockholm, Belgium, and Bombay.

In 1956 she was diagnosed with leukemia and eventually breast cancer.  Dr. Elda Emma Anderson died in 1961. She never married and had no children.

In honor of her memory, the Health Physics Society established the Elda E. Anderson Award in 1962, which is presented yearly to a young member of the Society to recognize "excellence in (1) research or development, (2) discovery or invention, (3) devotion to health physics, and/or (4) significant contributions to the profession of health physics."