The Fort St. Vrain project was innovative in more than one respect, and while it did not blaze the trail in HTGR (High Temperature Gas-cooled Reactor) commercialization - a feat accomplished by the Peach Bottom Atomic Power Station - it did considerably advance the technology toward full commercial operation and duplication on a wide scale through some significant design changes.  One of the most interesting of these was the use of a prestressed concrete reactor vessel (PCRV) for the reactor itself and primary components instead of a steel vessel. 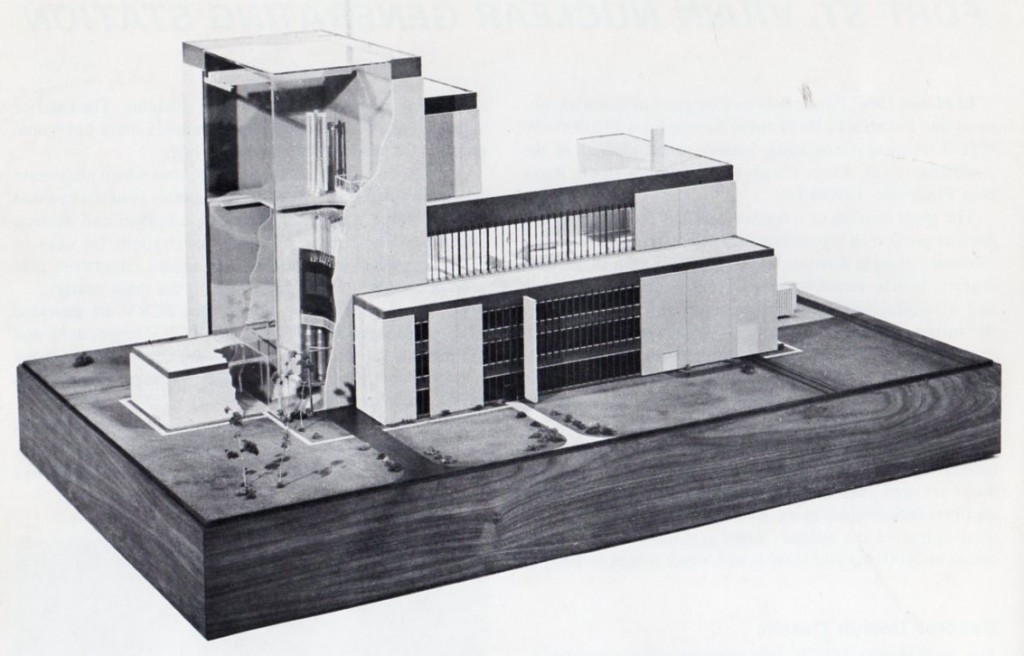 Above, a scale model of the Fort St. Vrain Nuclear Generating Station as actually constructed.  In this view, what we might call the primary or nuclear portion of the plant is at left, inside the tallest structure; the steam plant is in the structure to the right of it.  The PCRV can be seen in the lower section of the tall reactor building; on top of it is a refueling operations floor that we'll see more of in a future installment. 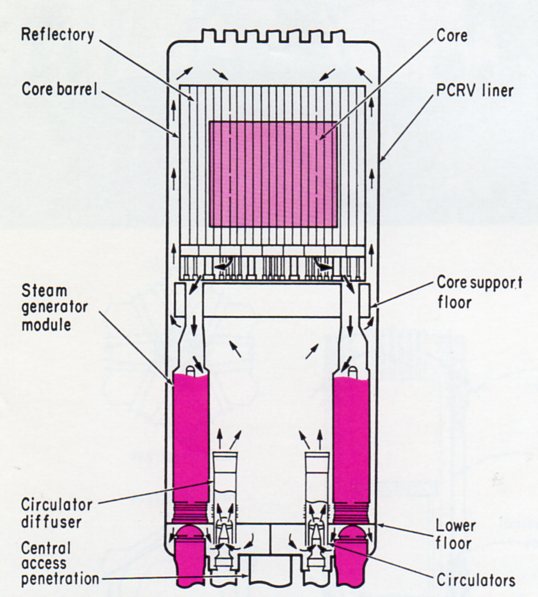 The design of nuclear steam supply system (NSSS) selected for Fort St. Vrain is shown above.  The 841 MWt core is seen in the upper end of the system, with the steam generators and helium circulators located below.  Control rod drives entered the core from above and are not shown here.  This system was roughly 31 feet in diameter; the cavity in the PCRV was 75 feet tall. 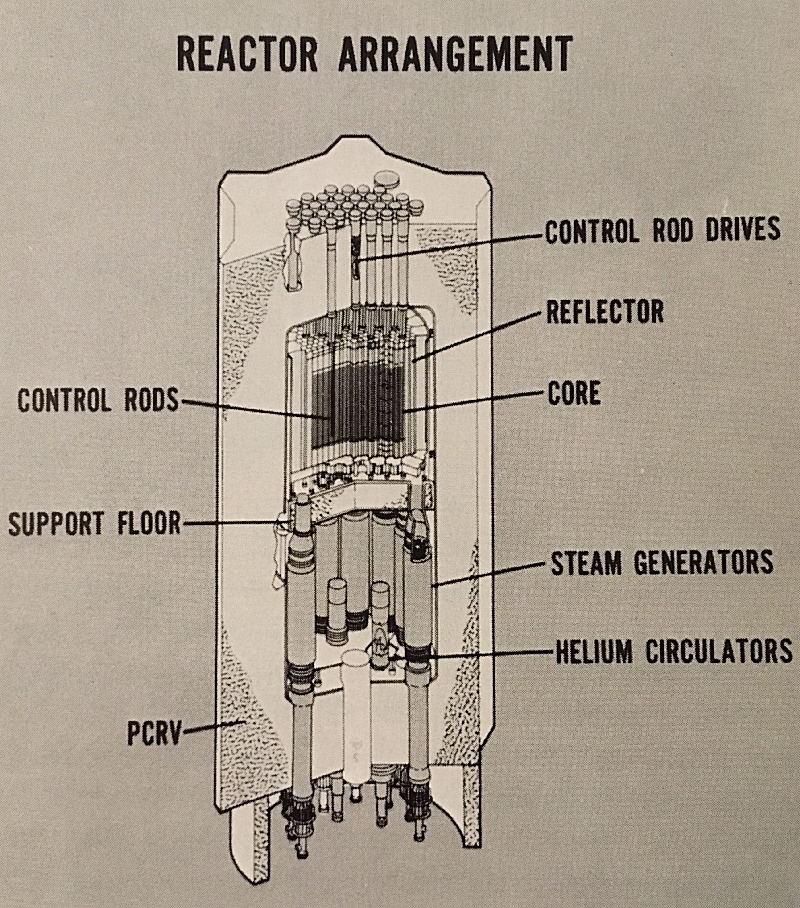 This view gives a perspective of the relative size of the PCRV and the primary system.  The 12 steam generator modules' and 4 helium circulators' arrangement can be better appreciated here, as can the skirt area below the PCRV.  Overall this PCRV was 106 feet tall and 61 feet in diameter.

Selection of the prestressed concrete PCRV concept was made as part of the process to compact the NSSS for future plants as compared to Peach Bottom.  Using a unitary concrete structure such as this allowed the entire NSSS to become essentially integral inside of it.  According to General Atomic, integrating the components in this manner "reduces the primary coolant inventory, eliminates external piping, removes the requirements for steam generator pressure shells, provides a single integral radiation shield, and results in minimum building size."  Later on, when the AEC requested the reactor vendors to study nuclear plants in a fantastic 10,000 MWt range, both Westinghouse and GE informed the AEC that they would have to move to integral, concrete vessels of some sort to make nuclear steam supply systems of that scale practical -- but it never happened, and neither did later design generations of gas cooled reactors designed by General Atomic.  Thus, Fort St. Vrain remained unique in the United States in the respect of its use of concrete to contain the primary system. 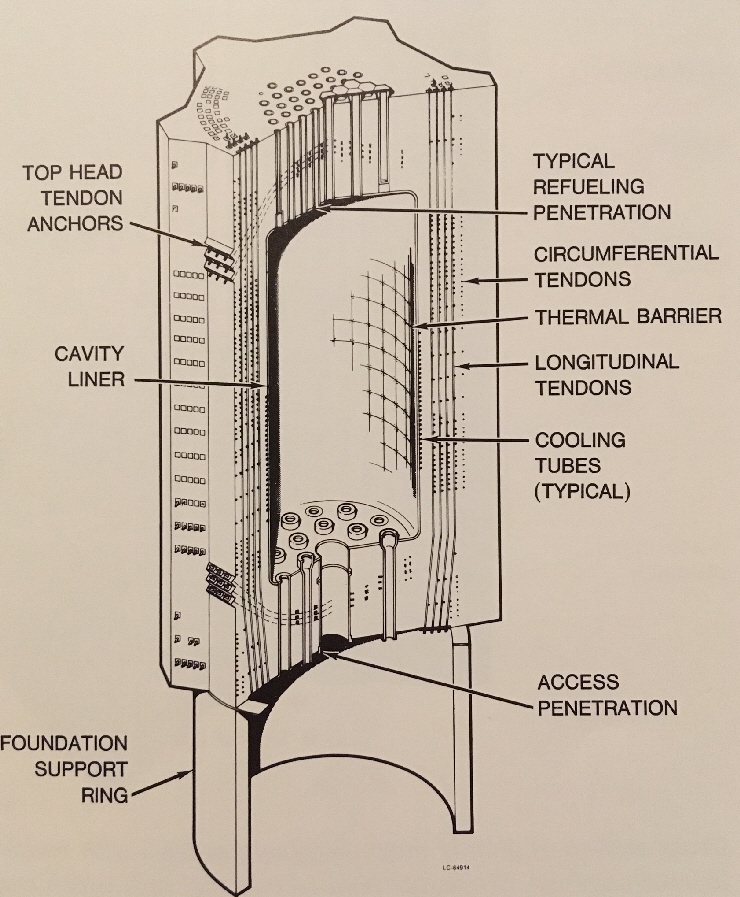 With the nuclear components removed, we now see the key components of the PCRV itself.  The cavity for the nuclear steam supply system (NSSS) was lined with carbon steel, which was applied to form a gas-tight seal.  The thermal barrier and cooling tubes were necessary to keep the concrete cool; a manway ("access penetration") was included through the bottom of the PCRV. 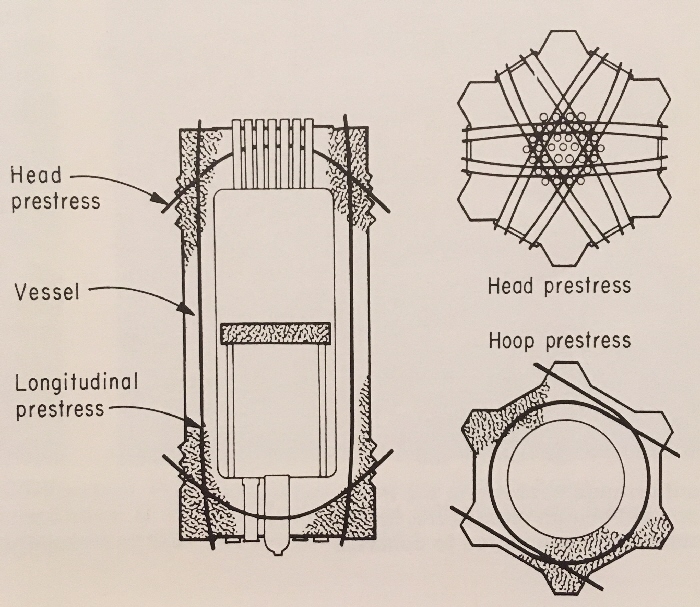 The concrete of the PCRV structure had to be steel reinforced and prestressed in order to contain the pressure of the primary system gas, helium, which was pressurized to to roughly 700 psia although the maximum design pressure of this PCRV was comfortably higher at 845 psia.  The PCRV itself comprised about 6480 cubic yards of concrete and the 3/4 inch carbon steel liner, as well as 448 steel tendons.  The head and longitudinal tendons were loaded to 1.4 million pounds force, while the circumferential tendons were loaded to 1.25 million pounds force.

There was another significant advantage to incorporating a concrete vessel like this in the plant design - mobility, or that is to say, the ability to site a plant anywhere.  By the time this plant was designed, there were already problems with getting the very large and heavy components required for light water reactors to some prospective nuclear plant sites.  In fact, the size and weight of such components could and did prevent siting a plant of a given type in a given desired location in some instances.  It was for this reason that GE and Chicago Bridge & Iron developed the ability to field assemble large BWR (Boiling Water Reactor) pressure vessels on site at the end of the 1960's.  This allowed utilities to site nuclear plants in locations that could not take shipments of either a large prefabricated BWR vessel, or else a slightly smaller but heavier PWR vessel and attendant steam generators.  With the PCRV concept, however, the PCRV itself was built right on the spot, there was practically no limit as to where a gas cooled reactor plant could be constructed because anything required to make it could be shipped anywhere it was possible to construct a large power plant in the first place.

As we now know, although the PCRV concept itself was eventually proved out by operation of the Fort St. Vrain Nuclear Generating Station when completed, no other PCRV's were built in the United States.  It will probably be some time in the future when this highly sensible and practical idea is revived - quite possibly for gas cooled reactors - in the United States. 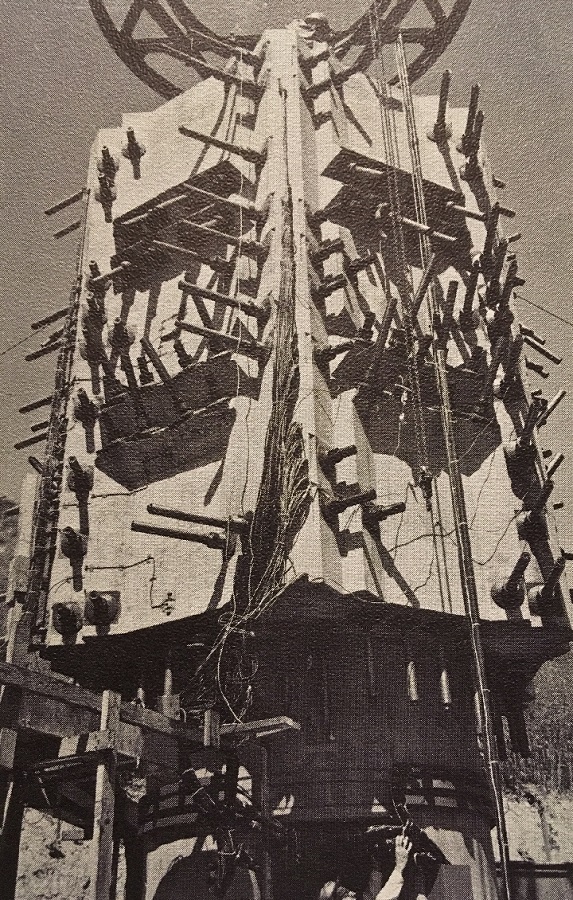 Prestressed Concrete Reactor Vessel one-fifth scale model being tested at General Atomic, near San Diego.  As can be seen here, it was intended that tendons (both on the model and the actual plant) be accessible for inspection and even for replacement.  Tests of this model assured General Atomic that there was no credible situation that could have lead to a major breach of this structure that then would have led to the rapid loss of the helium coolant - a very important consideration for gas cooled reactors.  Quite aside from the safety and site selection aspects, a PCRV allowed for the use of local materials and labor in construction of a plant as well as avoidance of the cost of shipping large primary components.

In later installments -  Design of plant components, construction of the plant, and more!  Illustrations used in this series come from a Fort St. Vrain Nuclear Generating Station press package and the various materials contained therein, including brochures, papers and photographs.