A Yankee Success Story in Pictures 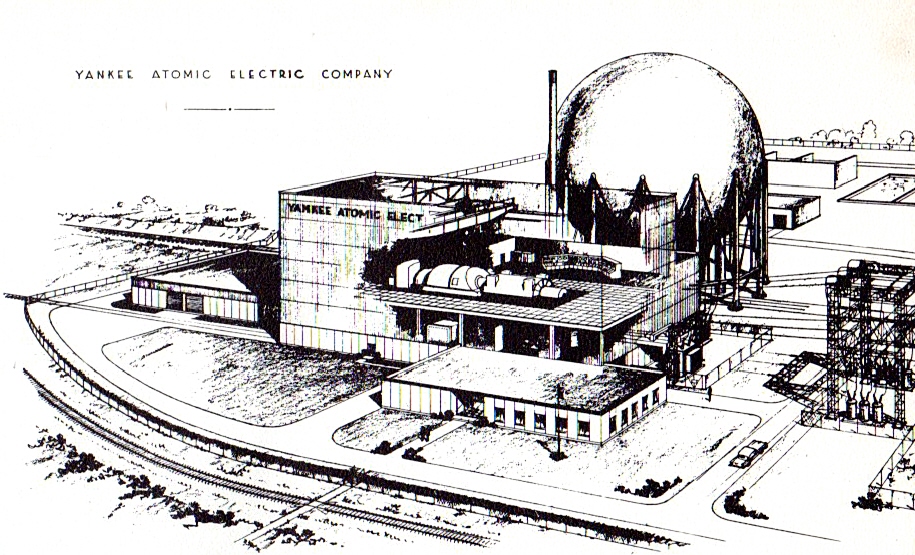 The dawn of the atomic energy age had only just broken in 1954 when representatives of the major electric utility companies of New England met to form a new venture.  On the very next day after President Dwight Eisenhower signed the (amended) Atomic Energy Act of 1954, these representatives launched, in their first meeting, the consortium that would build one of the most successful early nuclear plants of them all.  This plant was to be owned by a generating company, not a utility, and would sell atomic generated electricity to the component owner-members.  The company would soon be named the Yankee Atomic Electric Company and would set a precedent for several following "Yankee" plants. 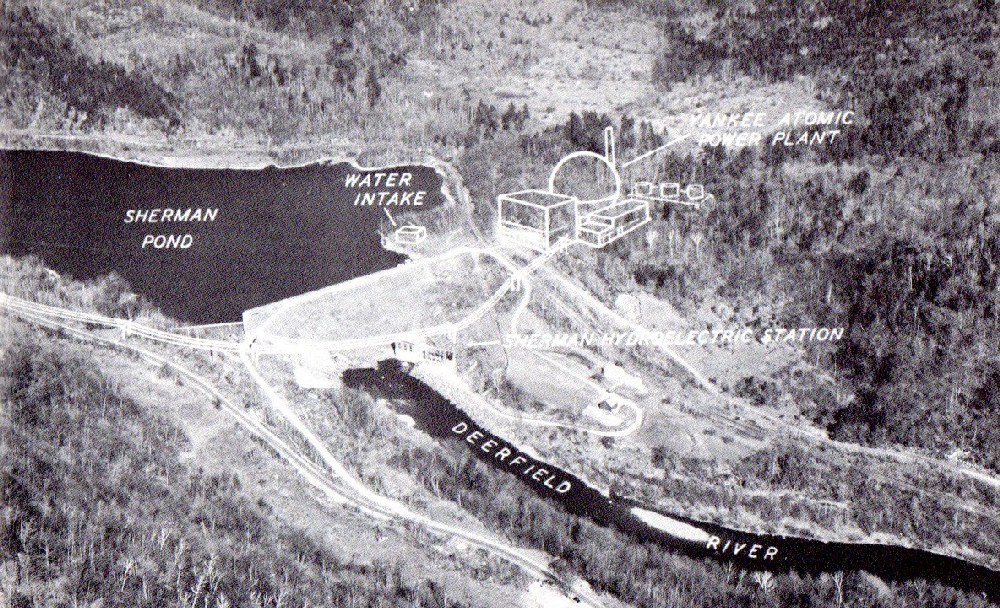 A fairly remote but not inaccessible site for the new atomic power plant was selected-seen above in phantom view. The site was adjacent to the scenic Deerfield River near Rowe, Massachusetts, and was close by the existing Sherman Hydroelectric Station.

Yankee Atomic Electric's new power plant was to be built under the U.S. Atomic Energy Commission's Power Demonstration Reactor Program; as such the AEC would contribute $5 million for research and development costs and would waive the fuel costs for five years. The constituent companies that owned Yankee Atomic Electric (Boston Edison, Central Maine Power, Central Vermont Public Service, Connecticut Light and Power, Eastern Utilities Associates, Hartford Electric Light, New England Electric System, New England Gas and Electric, Public Service Co. of New Hampshire, and Western Massachusetts Electric) would pay all R&D costs above the AEC's $5 million and would themselves fund the construction of the plant. Originally the construction cost was estimated at roughly $35 million, but according to Yankee Atomic Electric, the estimated cost soon exceeded $40 million after detailed design was completed.

Westinghouse was selected to construct the nuclear steam supply system, and acted as a joint contractor with Stone & Webster Engineering, which would design and construct the overall power plant. 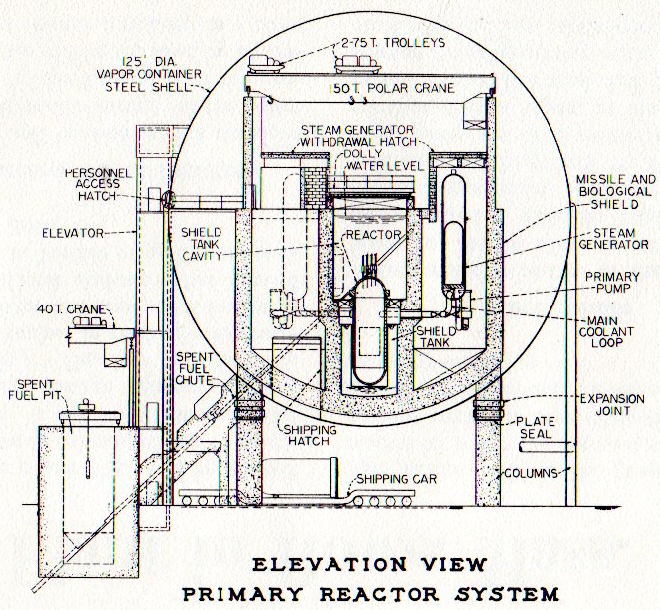 The plant incorporated a spherical vapor container, seen above. Construction of this structure began with the dual-annular reinforced concrete "cup" that would contain the reactor in the center and the four steam generators in compartments in the outer annulus. Once this structure had been built on top of its steel-encased concrete pilings, the sealed vapor container sphere would be built around it. The sphere was built of 1.25-in.- and .875-in.-thick steel and was 125 feet in diameter. The sphere's internal volume was over a million cubic feet and it was designed to hold an internal pressure of 35 psig.

The provisional construction permit for the plant, originally conceived as a 480 MWt/145 MWe gross/134 MWe net unit, was issued in November 1957, and heavy construction began at the site six months later, in April 1958. 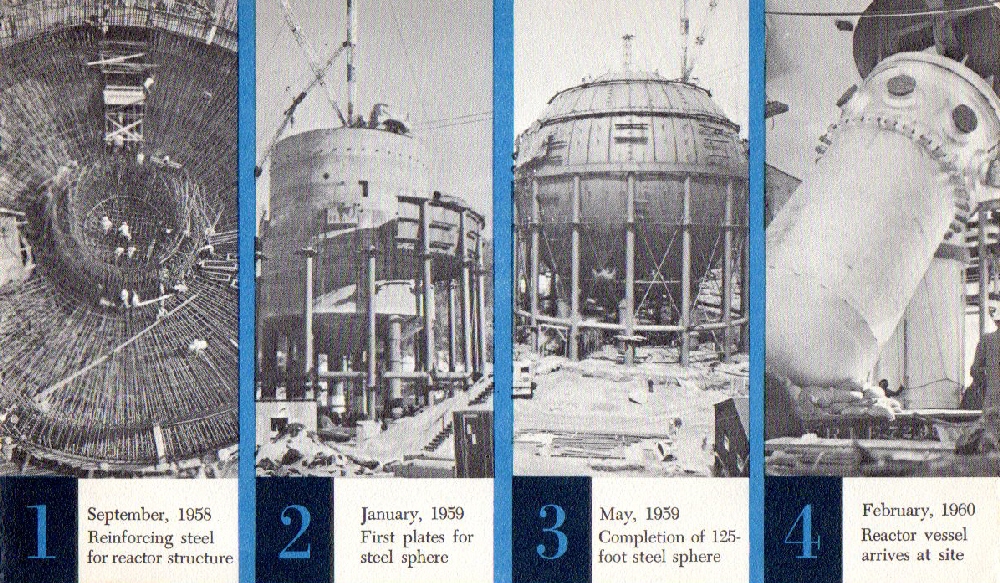 Construction of the plant was exceedingly rapid compared with later projects, covering only about three years. The reactor was started up for the first time in August 1960. Testing followed, and the plant was put on the grid at a temporary 110 MWe net rating at the very start of 1961. Full rated power on the grid was obtained in June 1961. 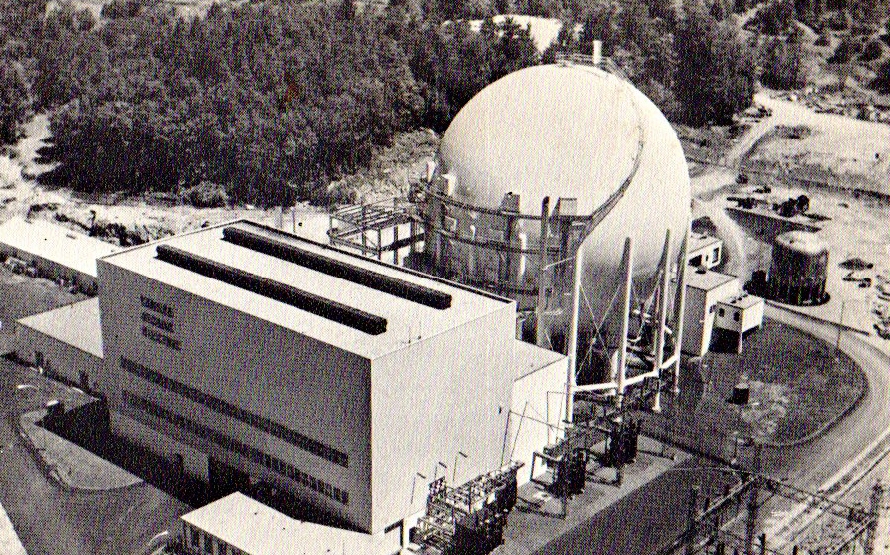 The Yankee Atomic Electric power plant, known in many circles as "Yankee Rowe" because of its location, had a distinctive appearance. According to Stone & Webster, the AEC hailed it as "the nuclear success story of 1961." Perhaps more significantly, the plant-having been completed considerably ahead of the original schedule and at a cost about 23 percent below the original higher estimate-led to the project receiving, in June 1962, the Edison Award of the Edison Electric Institute. 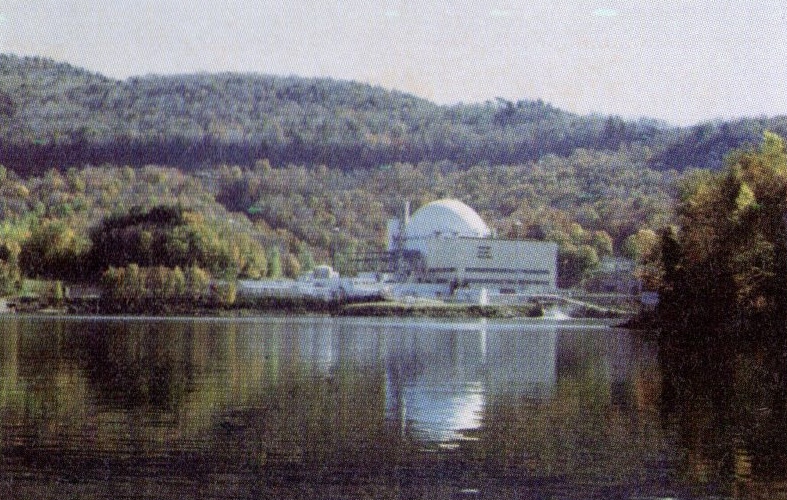 The beautiful location of the Yankee Rowe plant is seen above in a photo from a Yankee Companies brochure produced in 1982. By this time the plant had been uprated to 186 MWe net (at a reactor power rating of 600 MWt). 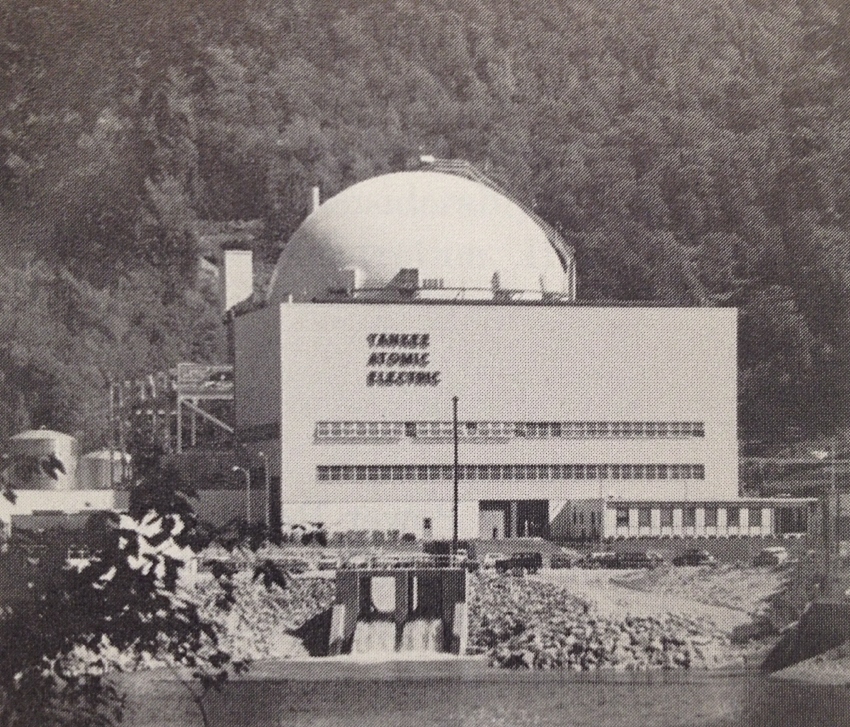 History, and time, caught up with Yankee Atomic Electric's power plant in the 1990s. In October 1991, with several years left to run on its license, the plant was shut down voluntarily by its owners due to concerns about embrittlement of the 175 ton, 8-in.-thick reactor pressure vessel. Over the next couple of months, plans were made to inspect the vessel and find a way to ensure safety of the plant; however, this unit predated the meticulous material history and record keeping of later plants, and assurance of the vessel's integrity was not nearly as easily obtained as it was with later plants. The owners made the announcement on February 26, 1992, that Yankee Rowe (then the oldest operable unit in the country) would permanently remain shut down and would be decommissioned.

The success story of the Yankee Atomic Electric Company does not end here, though. In a process that lasted from 1992 through 2007, the nuclear power plant was defueled and then completely dismantled and removed. Heavily contaminated components were shipped offsite to Barnwell, S.C. (although some reactor internals remain in a cask on site). The spent fuel was transferred to dry casks, and the spent fuel storage facility on site is now all that remains to be seen. So, the 30-year operation of the plant was followed by a successful, complete decommissioning-truly a success story from start to finish. 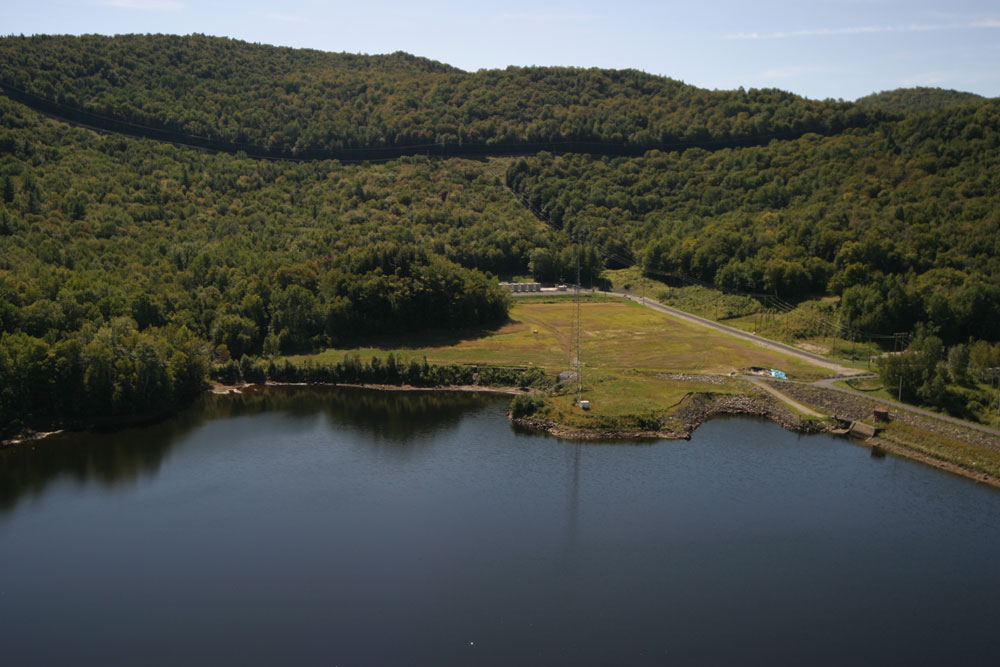 Sources for this article and its illustrations include:

Will Davis is a member of the Board of Directors for the N/S Savannah Association, Inc. He is a consultant to the Global America Business Institute, a contributing author for Fuel Cycle Week, and he writes his own popular blog Atomic Power Review. Davis is also a consultant and writer for the American Nuclear Society, and serves on the ANS Communications Committee and on the Book Publishing Committee. He is a former U.S. Navy reactor operator and served on SSBN-641, USS Simon Bolivar.