Roadblocks to Nuclear: What’s holding the industry back and can we resolve it?

There has probably never been a time of more optimism and uncertainty for the nuclear industry than there is right now.

As a current graduate student studying nuclear engineering at The Ohio State University, I am often exposed to the cutting edge of nuclear technology, and trying to assist various Department of Energy, NASA, and startup efforts. These new technologies and the promise they have are what give the industry hope for the future that someday we will be rolling out plants that are so safe, clean, and cost effective, nothing else can compete. There are so many fledgling ideas out there that, given enough resources and time, could revolutionize the way we get our energy and forever change the energy makeup of the planet. In addition, at the beginning of 2014, there were 72 new reactors under construction around the world, which is the highest number of active constructions in 25 years [1].

On the other hand, it seems that a current plant is being shut down left and right. Each shutdown serves as ammunition for anti-nuclear proponents to say that it's an outdated technology that has better alternatives. While plants are being shut down, we find that they are not currently being replaced with "clean" sources as often promised by the groups that try and shut them down. Rather, they are replaced with natural gas, the supply of which seems like it will last forever-which it won't. Renewables that have received generous subsides for years provide additional cheap energy to the grid. In some auction-based markets, utilities with subsidized renewables can sell the electricity from them at no cost and still turn a profit. To understand the value of nuclear power, we need to understand future energy demands.

The picture above illustrates the projected energy demand through 2040 by the Energy Information Administration (EIA). In its recent report, EIA states that energy demand through this time period is expected to increase by nearly 48 percent, mostly from developing nations. What's interesting here is that as far as total generation shares, there is hardly any net change. In other words, our energy makeup is not going to change. We will still be relying on the same sources at relatively the same share, which is reason enough to alarm those who believe in climate change. Furthermore, most of the renewable share will come from the construction of dams in these developing nations, and a relatively large portion of these "other" sources will come from carbon-emitting biomass and waste-based renewables. 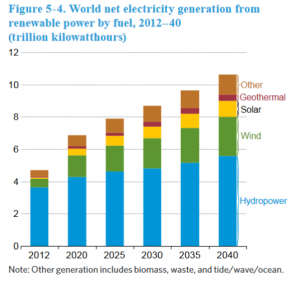 What's frustrating to me as a nuclear engineer (referring back to figure 1) is the dismal growth rate projected for nuclear power. For those who believe in climate change, we realize that the scale up of nuclear and renewables is not fast enough to offset the growth of carbon-based energy sources. What's even more disturbing intellectually, in  the United States, is that nuclear power, upon review, is  the most bipartisan option for energy generation. It appeals to those on the right for reasons of energy diversity, jobs, and technological security. It appeals to those on the left for its ability to generate large amounts of clean energy. Yet, when talking about the future of electricity generation, I hardly ever hear it brought up in discussion as a practical source, which we all know it to be. Why is that?

As it stands, nuclear energy, for all intents and purposes, is a boutique source of energy. Even though it is the cheapest energy source when up and running [2], the large upfront capital cost will forever hold it back from being implemented on a large enough scale to mitigate climate change. Most people who are unfamiliar with nuclear energy believe that our electricity could either come from finite fossil fuels forever, or that we can rely on intermittent renewables as an advanced and developed society. In my experience, after explaining the potential of nuclear power to those who are unfamiliar with it, they wonder how we can progress into the future without using it. However, there will always be holdouts that deny its usefulness, reciting the usual anti-nuclear rhetoric.

We cannot win over everyone with the merits of nuclear power in the time that it would take to reduce carbon emissions to reduce the effects of climate change. Even if we had all the time in the world, there would still be deniers to the benefits of nuclear power who use arguments that are tantamount to the logic used by climate change deniers. It's just human nature. I personally believe that we should focus on convincing the minds of those who will determine energy generation sources in the future. Those minds are the utility executives who have bottom lines to meet.

The goal of this series is to explore what is being done in the industry to address the concerns of nuclear power plant economics, and what can be done to make it truly the most economical source for producing electricity. The costs of this and other technologies are very well established, and there is a goal in mind. To quote Transatomic chief executive officer Leslie DeWan in PBS NOVA's The Nuclear Option, "If [nuclear] isn't cheaper than coal, than it isn't worth doing." This could not be more accurate. While it is important as scientists and engineers who understand this technology to be its advocates, I believe that it is equally important to investigate ways in which we can make nuclear power the cleanest and most cost effective source of electricity generation. If this can be done, nuclear without a doubt will prevail over any other source as it currently stands. There's too much at stake for this not to be the case.

While this is an enormously complex issue, hopefully this series will open discourse on the attainable steps for nuclear power to become the go to source for electricity. 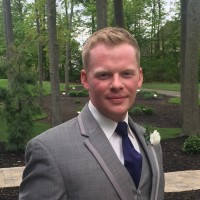 Doug Hardtmayer is a graduate student studying nuclear engineering at The Ohio State University. His research is focused on pyroprocessing and fuel assessment. He is a member of the American Nuclear Society.