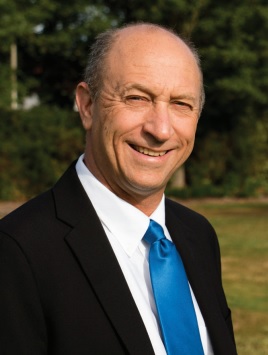 Kicking off the American Nuclear Society's 2016 Winter Meeting (held at Caesar's Palace, Las Vegas) was ANS President Dr. Andrew Klein's speech at the Opening Plenary, in which Dr. Klein expressed a bright vision for the future not just of ANS but of its members and their contributions.

Klein opened his presentation by noting that nuclear technologies are needed now more than ever; yet, we also find ourselves, he said, at a time when it is not nuclear energy technologies that are foremost in the minds of most but rather renewable technologies.

Noting that there is some increase in support from the Government in the way of R&D for nuclear, Klein also observed that political leadership in this country rarely ever mentions nuclear energy when there is a discussion at hand concerning 'clean energy' technologies.  Klein implored political leaders and those in policy making positions to recognize nuclear energy for what it really is -- a vital component of the "all of the above" solution that will lead us to clean, around the clock energy in this country.

The ANS President mentioned the "Nuclear in the States" initiative and the now well-known toolkit which has caught the eye of both those in media and in the policy sphere.  Klein remarked that while these efforts have been a good start "there is much more to do."  He asked members to get the Nuclear in the States Toolkit and bring it to policy makers in order that they might understand all the other options they have other than seeing well run nuclear plants in their regions be shut down prematurely.

Turning from policy to activism Klein mentioned the recent participation of a good number of ANS members in a well publicized "Save the Nukes" march in Chicago not too long ago.  The effort, developed in conjunction with Environmental Progress, was aimed at bringing attention to the plight of Illinois nuclear plants operating in a challenging merchant environment awash in cheap (for now) natural gas fueled electricity.  The participants also engaged in an important policy aimed summit which resulted in the launch of a new Clean Power Coalition to unify efforts and direct attention.

Klein told those assembled that "we can't allow one more nuclear plant to close," observing that Illinois might lose not just one but two fully operable nuclear power plants at times long prior to their license expiration dates.  To that end he asked that ANS members redouble their efforts to not just talk at the meeting but take real action upon returning to their homes, as it "will take all of us to 'Save the Nukes'!"

Turning to the professional society aspect of ANS, Klein observed that his varied interactions with other organizations, both regulatory and professional from around the world have showed him that there is a common goal among them all:  The improvement of our professional nuclear communities.  He noted that we're all stronger together, worldwide, when any and all barriers to our interaction are removed.

He applauded particularly the young members of ANS for not just their professionalism and dedication to ANS but for their real contributions in nuclear science and technology, whether they be in improving medical diagnosis or making food safer.  He augured the future by looking forward to what he feels sure to be many more new developments from these young professionals as well.

Impressed by the activity and action of the ANS membership, Klein (at the close of his presentation) announced that he intends to build on past ANS President Gene Grecheck's motto of "The world needs nuclear and nuclear needs ANS" by adding on the very important stipulation ".. and ANS needs YOU."  In that light Klein announced his plan to address somewhere between six to ten "ANS Grand Challenges," to be determined at this very meeting (and by action taken on the ANS website) and which are "technical challenges that need to be addressed to enhance the economic, political and public acceptability of nuclear technologies."  Klein assured the ANS membership that this initiative will not "sit on a shelf" but will be acted upon with vigor both by himself and ANS Vice President / President-Elect Bob Coward.  Truly, it is a vision for the future of nuclear technologies, by way of identifying specific challenges now, and beginning to tackle them now.

-- by Will Davis for ANS Nuclear Cafe, from the ANS Winter Meeting 2016 in Las Vegas, Nevada.