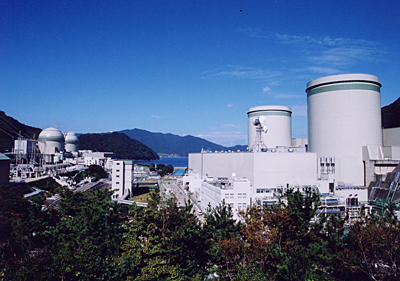 Takahama NPP courtesy Kansai Electric Power. Units 1 and 2 are on the right; Units 3 and 4 are in the distance on the left.

These two units became the first in Japan to have their operational lives lengthened when, last June, they were given official extensions by the Nuclear Regulation Authority.  However, the units still must have safety enhancements made to meet the latest post-Fukushima requirements and stringent NRA inspections.

For example, as shown in the above illustration (courtesy Kansai Electric Power) it will be necessary to reroute the service (cooling) water intake piping for Unit 2.  The original arrangement is seen on the left, with the piping running above the bedrock level.  The new construction will include a piping tunnel bored through the bedrock to reach the original intake structure.  This change is being performed to prevent earthquakes from displacing the piping, leading potentially to loss of the heat sink for this unit.  The piping of Unit 1 meets requirements and does not need to be changed.

Both units 1 and 2 will have significant alterations made to their containment buildings.  In this portion of the upgrade, extra concrete and steel reinforcement will be added to the upper portions of the buildings with the intention of reducing onsite radiation levels in the event of a serious accident.  The lower portions of the containments on these units will be reinforced as well.

Commencing as soon as possible, the refueling water tanks at both units will be removed.  New tanks will be fabricated and the supports for the tanks heavily reinforced over the next two years.  A shield wall will also be added around each tank, for protection against projectile damage (as might be expected in the unlikely event of a tornado.)

The existing control rooms will be heavily rebuilt, as shown in the illustration above (courtesy Kansai Electric Power.)  Analog equipment will be replaced with digital equipment, and the new control rooms will incorporate LCD and touch screen driven operator interfaces.  This particular upgrade, according to Kansai, is voluntary and is being done to enhance the ability to maintain the instrumentation and control portion of these plants.

In addition to this voluntary change, a significant mandatory change is the replacement of a great deal of the units' cabling with new cabling that meets present fire codes for use in nuclear plants.  Fire retardant cables will be installed to the maximum extent possible; where this is not possible, fire-retardant sheets will be used to protect existing sections of cable.  Fire detection equipment (it is assumed, in the cable runs and probably cable spreading rooms) and extinguishing equipment will be added to both units as well.  Cables under the central control rooms will be entirely replaced.

The investments to be made by Kansai in these two units will be heavy; no totals have yet been stated by the company in terms of estimated total cost to upgrade these two units (and none appears in the latest financial statements released by the company).  Present plans show the estimated completion of the Takahama 1 and 2 upgrade work in March 2020.  The Japan Atomic Industrial Forum reports that Kansai Electric Power hopes to resume operation of these units very close to that time, assuming all goes well. 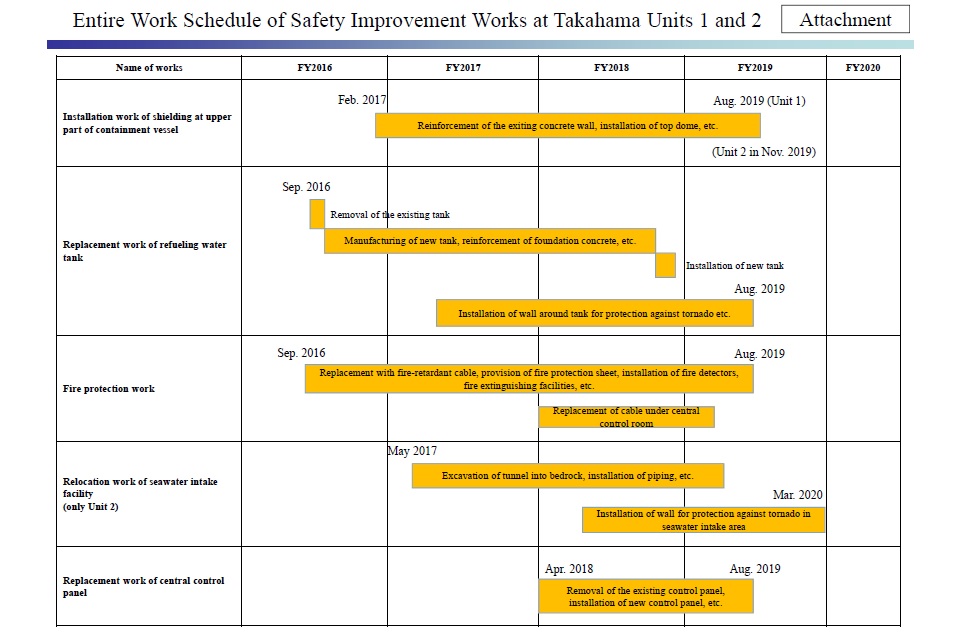