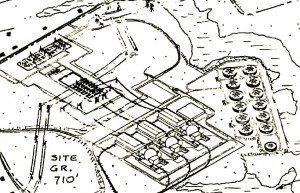 It is a common myth today that all of the nuclear plants historically ordered in the United States were unique, custom design and construction jobs. Many of the plants were built from standardized design drawings developed by established architect-engineer (A-E) firms in order to ease the work load and speed up progress on individual projects. In such cases, standard nuclear plant drawings were the basis for any given project the A-E took on.Over time, incremental changes were made in the drawings and of course customer-specific and site-specific changes needed to be made, as well as specific adaptations for the make of nuclear steam supply system (NSSS) ordered by the customer. Stone & Webster as well as Sargent & Lundy were just two of the A-E firms that developed and used standard drawings, leading to there being a number of very similar nuclear plants in different places, built for different owners. Some projects, however, were even more repetitive than these.

The push for standardization of all aspects of nuclear plant design and construction led to a number of significant developments in the 1970s.The Atomic Energy Commission (AEC) capped unit size at 1300 MWe, and strongly encouraged standardized NSSS designs that could be referenced in a new plant's applications for licensing to speed the process. Westinghouse, Babcock & Wilcox, and Combustion Engineering chose to standardize and reference their NSSSs while General Electric decided to standardize and reference the entire nuclear island. This move was said to further speed licensing and construction by reducing and controlling the number of system interfaces between the nuclear island and whatever design was chosen for the "balance of plant". The AEC also encouraged either replication of nuclear plants (copying those already built) or duplication of nuclear plants (constructing a number of identical already built all at once, all ordered at the same time) as further advances.

This standardization was of course embraced as just one part of a wholesale movement in the industry to reduce costs and speed up construction schedules. In one direction, it led to the Standardized Nuclear Unit Power Plant System (SNUPPS) series of plants described in some detail in a previous ANS Nuclear Cafe piece. Some utilities, however, were so large that they needed multiple new nuclear plants each. Some of them also had traditionally designed and built their own power plants in-house, which made participation in a SNUPPS-type consortium unlikely. One conjunction of the standardized NSSS designs-duplicate construction of identical plants at once-and in-house design and construction led to the interesting "Project 81" of Duke Power Company in the middle 1970s.

Duke Power decided that it needed two three-unit nuclear plants in the early 1970s beyond those that it already had built or had under construction (Oconee, in operation; McGuire and Catawba, in progress). The company decided to take full advantage of the then-understood advantages of standardization and duplication and announced it would construct all six nuclear units identically and simultaneously. As with the SNUPPS units, each nuclear unit was to be a stand-alone plant and would thus share absolutely the minimum of equipment with other units on site.

On April 24, 1973, Duke Power awarded the contract for the required six NSSSs to Combustion Engineering, selecting the very modern "System 80" design of advanced two-loop pressurized water reactor for its new project. Each unit was to be rated 3817 MWt/1280 MWe. The System 80 was selected, according to contemporary reporting, largely because of its conservative design, although economics played a major role. At that time Combustion Engineering was advertising that a 1300-MWe System 80 could save a customer "as much as $100,000,000.00 in total costs over a ten-year period" compared to a 1150-MWe plant. It promised unit costs 1 to 1.5 mills/kwh less than an 1150-MWe unit, purported to save roughly $8 million to $12 million per year comparatively. The System 80 was advertised to offer both full plutonium recycle and rapid load following. 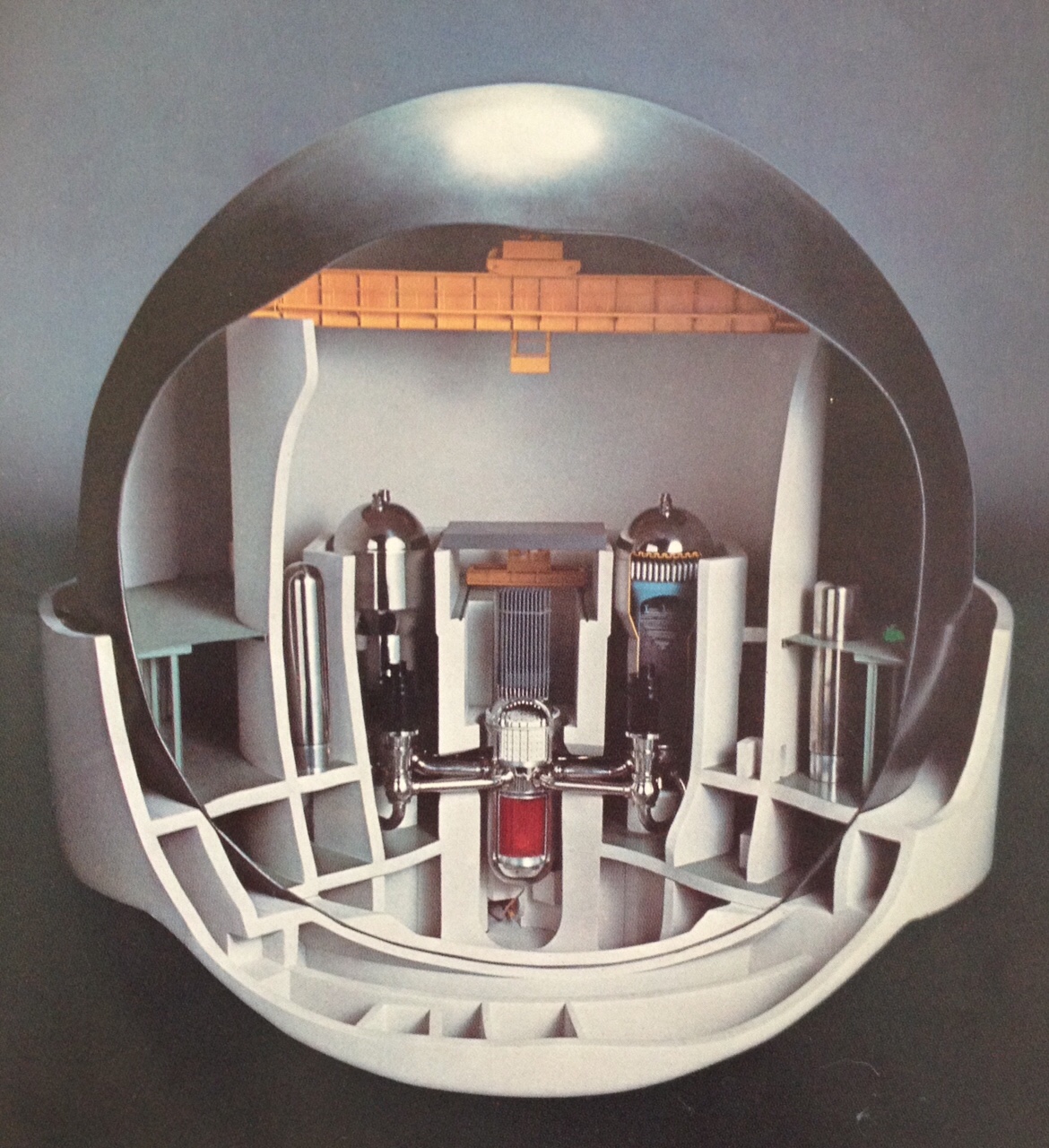 Two nuclear plants were to be built: Cherokee Nuclear Station, which was to be in Cherokee County, South Carolina, and Perkins Nuclear Station, in Davis County, North Carolina. Both shared the feature of having six nuclear blocks placed closely together and also shared the use of low height, forced draft cooling towers.

The NSSSs were ordered in April 1973, and later that year Combustion Engineering submitted to the Nuclear Regulatory Commission its package for the Combustion Engineering standard safety analysis report (CESSAR). Progress on Cherokee outpaced that on Perkins, with Cherokee ultimately receiving a limited work authorization in 1976 and another in 1977. (These authorizations were devised originally as an NRC tool intended to help those building nuclear plants get some work in progress while licensing was backlogged.)  In December 1977, construction permits were issued for the three Cherokee units.

As with many other utilities building large amounts of generating capacity in the late 1970s and early '80s, Duke Power ran into financial troubles. The general ills of the '70s (rising fuel costs, inflation, reduced spending and consumption by the public, skyrocketing interest rates, and unavailability of funds for borrowing) hit Duke Power hard as they did the other utilities, and a financial crisis ensued for the company. What was also troubling was that demand for electricity was seen not to be rising nearly as fast as had been predicted when Duke Power had three nuclear units operating and 10 under construction or on order.

The company slowed construction of the Project 81 plants. In fact, Perkins never even received a limited work authorization*. Facing continued declining financial health, Duke Power undertook a radical program to save itself, which included selling property and leasing it back, aggressively reducing operating costs, and cancelling unfinished projects.

Project 81 became perhaps the final casualty of the company's crisis in 1982-1983. Duke Power announced that it was cancelling five of the six Project 81 units; all three units at the Perkins Nuclear Station were cancelled, as were Cherokee Nuclear Station Units 2 and 3. Construction had only reached 17-percent completion at Cherokee Unit 1 when it too was cancelled the following year. After all these plants were cancelled, Duke Power's stock returned to a favorable rating. This story was by no means unique to Duke Power or Project 81; it is today an oft-repeated artifact of the times for all nuclear utilities. 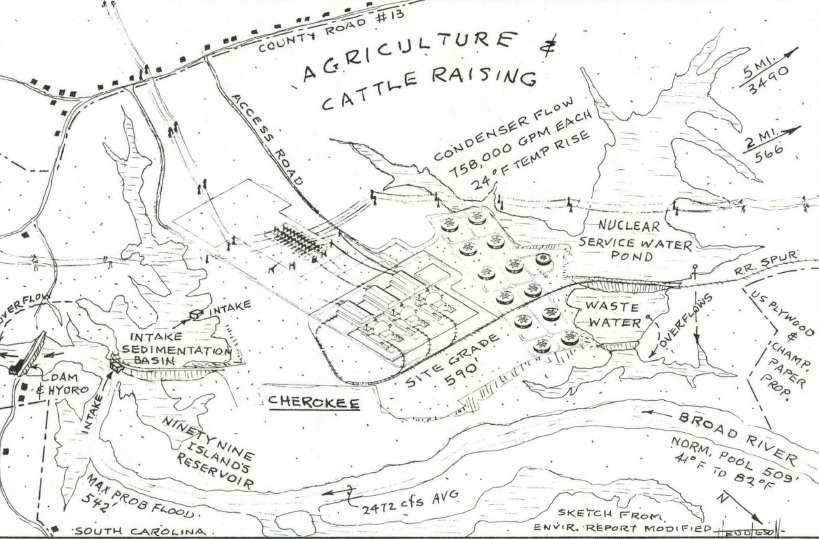 Today, the lessons of the first nuclear build in the United States have been learned. Nuclear plants need to be duplicated as much as is possible and built in number to hold down the costs for each unit, and each buyer. This holds true for small modular reactors as well as gigawatt-class units. Duke Power made the right move, at what everyone then and now would rationally say was the right time; as soon as completely duplicate plants became a reality, and as soon as standardized packages (such as the CESSAR) became available to speed licensing, it moved to ensure every nuclear plant it ordered after that time fit the new concepts for construction. That it was swept up in the malaise of the 1970s is not Duke Power's fault; that it decided to construct Project 81 in the manner it did is a solid, historic endorsement for the concepts of standardization and duplication so well understood today.

The plans for Duke Power's William States Lee Nuclear Plant call for the construction of that plant directly on top of the partially completed Cherokee Nuclear Station. Foundation work for Unit 1 remains at the site from "the old days," and Lee Unit 1 would theoretically be constructed on top of this unit. While Duke has cancelled the Levy project and has no firm dates for added units at Harris, it continues to pursue Lee and, according to the ANS Nuclear News 18th Annual Reference Issue (March 2016), the Lee project is still at the "vendor negotiation" status with startup planned in the middle 2020s.

*  Reference sources are unclear on the actual order status of the NSSSs for Perkins. Many sources list the NSSSs as ordered along with those for Cherokee in 1973, but some do not. There may have been a firm order for the Cherokee units and simply an option or memorandum of understanding on the Perkins units, but this remains vague. What is clear is that all six units were docketed by the NRC, and that only Cherokee received limited work authorization and then construction permit status.

"The Power That Lies Within Us." Ruth G. Shaw, address to the Newcomen Society of America, 2005; archived on Duke Energy website. Click here.

(Also referenced were other miscellaneous documents in the author's library relative to nuclear plant cancellations.)