Plutonium Disposition by “Downblending and Disposal” 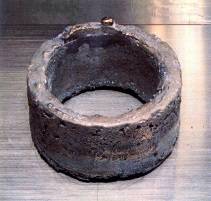 The subject of plutonium disposition has a long history that dates back to the end of the Cold War, combining complex technical, policy, and diplomatic issues. A discussion of this history is timely because the Department of Energy recently released a report1 evaluating technological alternatives to the current approach of disposing of plutonium using mixed oxide (MOX) fuel. One option-referred to as "downblending and disposal"-was assessed favorably in terms of cost, timeliness, and technical risk, but it introduces new technical and political challenges. This blog post provides a brief summary of the storied history of plutonium disposition.

In the wake of the Cold War, the United States and Russia were left with stockpiles of excess weapons-grade uranium and plutonium. In order to fulfill treaty commitments while supporting the global nuclear nonproliferation regime, the U.S. and Russia signed the Plutonium Management and Disposition Agreement2 (PMDA) in 2000. In this agreement, both parties committed to dispose of at least 34 metric tons of excess weapons-grade plutonium, primarily as MOX fuel for light water nuclear reactors. In 2010 this agreement was amended to permit Russia to consume plutonium in fast reactors with limitations on the production of additional weapons-grade plutonium.

The MOX approach was selected based on several evaluations of plutonium disposition options, including a 1994 report by the National Academy of Sciences (NAS) titled "Management and Disposition of Excess Weapons Plutonium." This report advocated a "spent fuel standard" whereby the plutonium would be converted "to a form from which the plutonium would be as difficult to recover for weapons use as the larger and growing quantity of plutonium in commercial spent fuel." The report recommended two options that fulfilled this objective: the consumption of plutonium in MOX fuel and the immobilization of plutonium with high-level radioactive waste (HLW). Although the report did not explicitly consider "downblending and disposal," it recommended against vitrification without HLW, noting that "[f]or states such as Russia or the United States, a chemical barrier alone would be insignificant."

To convert the weapons-grade plutonium to MOX fuel, the U.S. would build a MOX Fuel Fabrication Facility (MFFF) at the DOE's Savannah River Site. In 2002, the DOE estimated that the MFFF would cost about $1 billion, but by 2007 the cost had escalated to $4.8 billion. In 2013 the construction cost further increased to $7.8 billion, and as of 2014 the total life-cycle costs of the MOX program are estimated to be about $30 billion. In light of the current budget environment, this cost escalation prompted the DOE to evaluate alternatives for plutonium disposition.

In April 2014, the DOE released a report comparing five options for plutonium disposition including the current MOX program. Of those options, "downblending and disposal" was assessed most favorably in terms of technical risk and expense, with a life-cycle cost estimate of only $9 billion. In this option, plutonium oxide would be mixed with inhibitor materials and disposed at a geologic repository. The Waste Isolation Pilot Plant (WIPP)-a repository for defense-related transuranic waste near Carlsbad, New Mexico-served as the reference case. WIPP received its first shipment of nuclear waste in 1999, and it has already disposed of several tons of plutonium from the Rocky Flats Plant. While the waste form for this option may not meet the "spent fuel standard" endorsed by the NAS report because it lacks a radiation barrier, this could potentially be offset by achieving a geologic barrier much sooner than would be possible for spent MOX fuel or vitrified HLW.

However, the downblending option faces several significant challenges. First, it would require a supplemental agreement with Russia pursuant to Article III of the PMDA. In the past, Russia has been reluctant to accept disposition options that do not degrade the isotopic distribution of the plutonium from weapons-grade to reactor-grade, including vitrification with HLW. In addition to not altering the isotopic distribution, downblending also lacks a radiation barrier. Thus downblending would represent a significant deviation from the existing bilateral agreement, complicating negotiations with Moscow.

In addition, there are technical and policy challenges associated with using WIPP as the geologic repository. First, WIPP does not have sufficient remaining statutory capacity to accept the 34 metric tons of plutonium associated with the PMDA. As a result, using WIPP for disposition could require the amendment of existing legislation or enactment of new legislation. Further complicating this option, there was an accidental release of radioactive material from WIPP in February. This event is under investigation, and it is possible that WIPP may not reopen for years. While an alternate repository can be used in place of WIPP, the licensing process adds significant uncertainty and could substantially erode the estimated cost savings for this option.

Downblending and disposal of excess plutonium is under consideration given the motivation to demonstrate progress in meeting nonproliferation objectives, delays in the U.S. MOX program, and the current federal fiscal environment. To foster a discussion of this topic, the American Association for the Advancement of Science will host a breakfast panel event on the morning of Wednesday, June 4, in Washington, DC on "downblending and disposal" as an option for weapons-grade plutonium disposition under the PMDA (link to RSVP). In light of the benefits and challenges associated with the downblending and disposition option, we expect a lively and informative discussion and invite American Nuclear Society members to attend. In addition, ANS will host a conference on plutonium science September 7-12, 2014, in Las Vegas, NV.

Dr. Adam Hoffman is an intern with the Center for Science, Technology, and Security Policy at the American Association for the Advancement of Science, where he is supporting various Center initiatives and programs. In September of 2013, Adam completed a Ph.D. in Nuclear Engineering and Radiological Sciences at the University of Michigan.  After completing the internship, Adam will begin the National Nuclear Security Administration Graduate Program at the U.S. Department of Energy, working in nuclear nonproliferation.

The Defense Nuclear Facility Safety Board, which provides independent federal oversight of Department of Energy weapons facilities, has reported that low-level radioactive and other...

Final cleanup activities at the Hanford Site’s demolished Plutonium Finishing Plant have resumed following a pause in work prompted by the COVID-19 pandemic, the Department of Energy...

The world’s first atomic bomb test—code-named Trinity and conducted in New Mexico on July 16, 1945—had an unintended outcome that was only recently discovered....

The Department of Energy has reached a settlement with the state of South Carolina to remove 9.5 metric tons (t) of plutonium from the state, the agency announced on August 31. Under the...