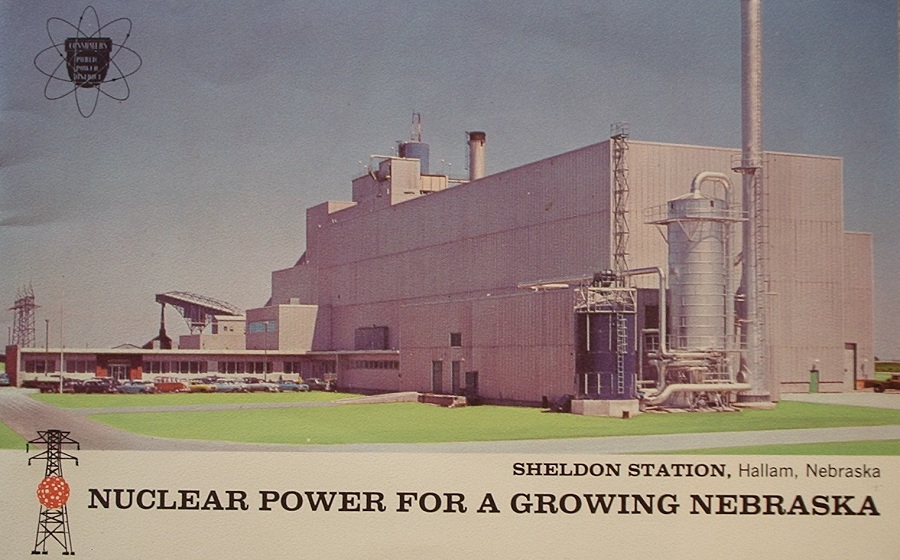 In our previous installment we looked at the Atomic Energy Commission (AEC) Five Year Plan for development of commercial nuclear power in the United States. In this final installment, we'll look at two programs that were initiated in the mid-1950s to help launch the era of construction of commercial power reactors-the Civilian Application Program, and the Power Demonstration Reactor Program. 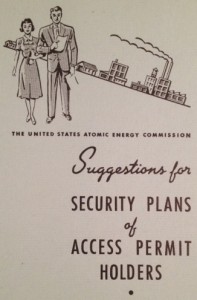 Through the mid-1950s, there was quite simply no way to get information that was developed within the defense complex/AEC with a restricted classification into the hands of any person or entity who wished to use it for the development of peaceful atomic energy. This changed when the Civilian Application Program was initiated in early 1956. A Westinghouse Bettis letter says it best: "The Civilian Application Program (CAP), established in accordance with the Atomic Energy Act of 1954, was designed to encourage the entry of private enterprise into atomic energy development"-a direct interpretation of Eisenhower's vision, and as we've seen already supported by industry that wished to enter and investigate the field for profit.

In May 1956, Bettis (Bettis Atomic Power Laboratory, operated for the AEC by Westinghouse) put out a summary explanation for the CAP and what it entailed. Its introduction offers more insight into the CAP and its intent. To wit:

"To encourage the entry of private enterprise into atomic energy development, the Atomic Energy Commission on February 4, 1956, made effective a regulation entitled, "Access to Restricted Data.  Under this program, known as the Civilian Application Program (CAP), business firms and individuals may gain access to certain categories of Confidential and Secret Restricted data relating to civilian uses of atomic energy. It represents a deliberate, determined attempt by the AEC to avoid further extension of Government ownership and operation of facilities and to encourage the entrance of private investment into the field of atomic energy." 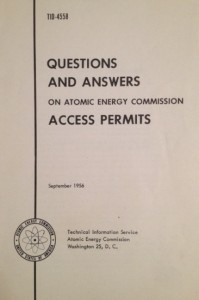 As might be imagined, this opportunity led to a mountain of paperwork for interested parties, and a large number of questions. AEC published a wealth of informative data (shown variously on this page) to support those who wished access to information. Specifically excluded from any access whatsoever was design and operational information that was specific to, or peculiar to, naval nuclear power plants, as well as some other areas of particularly sensitive information. A complete description of the types of information that were available to those with proper permitting fills several pages of the guide quoted above.

One might imagine that companies had to get further security clearance for their employees who would be handling such information-and one would be correct. The AEC publication "Suggestions for Security Plans of Access Permit Holders" sheds light on this aspect:

"One of the principal objectives of the Atomic Energy Act of 1954 is to encourage American industry to take an active part in the development of the civilian uses of atomic energy. In order to facilitate the discharge of its regulatory responsibilities in this regard, the Atomic Energy Commission established a Division of Civilian Application. Regulations governing access to Restricted Data (10 CFR Part 25) and the safeguarding of Restricted Data (10 CFR Part 95), by persons engaged in such uses, have been published in the Federal Register.

Pursuant to 10 CFR Part 25, the Division of Civilian Application issues access permits to those individuals and organizations that have a potential use or need for Restricted Data in the development of atomic energy for peaceful purposes. The approval of such a permit is merely a preliminary measure and does not grant access to Restricted Data. In order to obtain Restricted Data, appropriate personnel security clearances must be obtained for those who will require access to such information, and in addition, a facility clearance (i.e., clearance of premises) is required if the access permit holder is to receive and store Restricted Data. It is therefore incumbent on the permittee who desires access to Restricted Data to properly submit his request for clearance to the Atomic Energy Commission office administering his permit. (The identity of this office is indicated in the letter transmitting the permit.)"

The utility of such information, obtained by the AEC over a decade of work, is obvious-much work had been done, many reactors had been built, and much information learned. The CAP opened up a great deal of this work to civilian firms that now only had to meet the CAP requirements to obtain it, instead of investing millions of dollars to essentially reinvent the wheel.

Still, even with the progress to clear civilian firms to obtain and use classified information, there was felt to be a need to spur the development of different kinds of nuclear plants (as was clearly shown in my previous post on this topic).

To this end, the AEC announced in early 1955 its Power Demonstration Reactor Program. The AEC update on its five-year plan, found in the Atoms for Peace Handbook, notes this development thus:

The AEC most certainly did not want to fund entire projects, and did not. Instead, it assisted in various ways and didn't pay for cost excesses. The report continues:

"Reactor projects resulting from the power demonstration reactor program are to have primary technical and financial responsibility rested in the industrial group making the proposal. The Commission's financial contribution, if any, will be fixed in amount as the project is approved and overruns in cost must be borne by the industrial organization. In its invitation to industry to develop, construct, and operate these demonstration power reactor plants, the Commission stated that it would consider offering certain assistance including the following:

1. Waiving of fuel charges for loan of source and special nuclear material for fuel for a period up to 7 years.

4. Support of research and development in non-Commission facilities."

As we can clearly see, the Government did not pay for the first round of power reactors. These were privately financed with assistance rendered by the AEC as listed above, with any overrun in cost being the responsibility of the owner-operator and not of the AEC.

The AEC announced another round of this program later in 1955; this round solicited applications for small nuclear plants, of advanced types, by cooperatives or rural power companies. According to the Atomic Energy Deskbook, applications were received but contract negotiations revealed numerous problems, to the extent that the entire provisions for this round had to be revised. Under the second round with the new AEC provisions, "The AEC owns the reactor, bears related research and development costs, and bears the cost of fabricating the first core. The utility owns the electrical portion of the plant and operates the complete facility." In other words, the second round essentially duplicated the arrangement first used at the pioneering Shippingport Atomic Power Station. 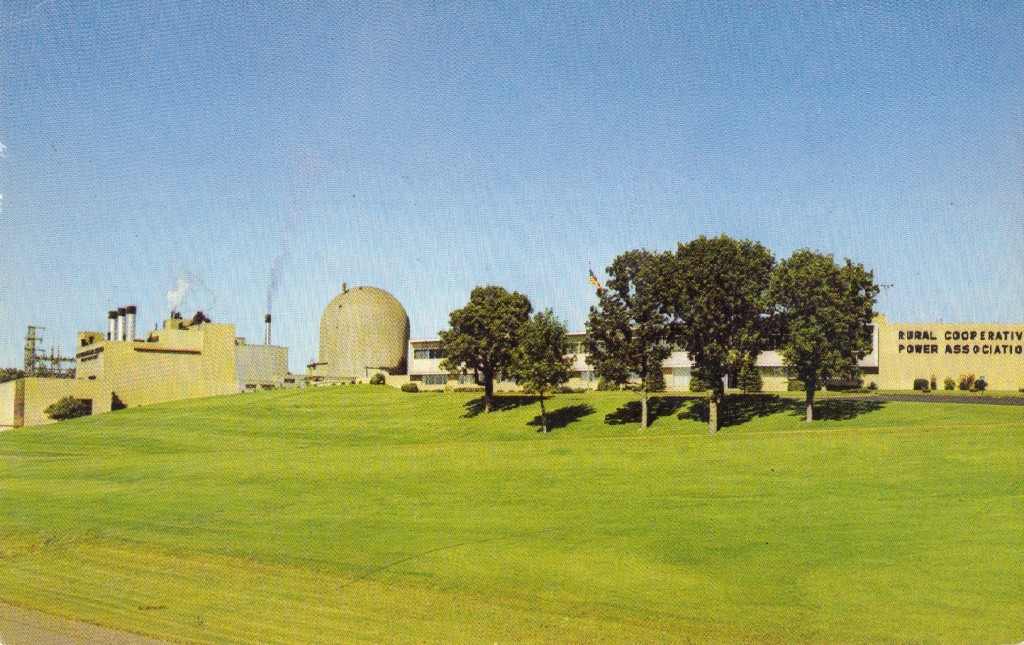 The second AEC round of power demonstration reactors included Elk River in Minnesota (seen above), which was an ACF, later Allis-Chalmers indirect cycle boiling water reactor hooked on to a previously constructed coal-fired plant, with interposed superheater fired on pulverized coal; the Piqua Nuclear Power Facility, an Atomics International organic moderated and cooled reactor hooked on to the original Piqua, Ohio, powerhouse; and the Boiling Nuclear Superheat reactor or BONUS, a General Nuclear Engineering Co., later Combustion Engineering BWR with integral nuclear superheat, constructed at Punta Higuera, Puerto Rico.  Later on, a fourth plant, Dairyland Power Cooperative's Genoa No. 2 plant in Wisconsin (most often known in the nuclear world as the LaCrosse BWR), which was an Allis-Chalmers BWR, was added in to the program under the terms of the second round when two of the original financiers dropped out of a prospective program and the AEC worked the project in after the second round had otherwise been set.

The announcement of the third and final round of the program came in 1957. The program's terms reverted to being identical to those of the first round but which encouraged the construction of more advanced reactor types. This round resulted in the Carolinas-Virginia Tube Reactor, a Westinghouse HPWR hooked on to an existing power plant at Parr, S.C.; Big Rock Point, a GE BWR; Pathfinder, an Allis-Chalmers BWR with integral nuclear superheat (comparable in concept generally to BONUS of the second round); and a final concept originally known just as the HTGR or High Temperature Gas Cooled Reactor, which was completed almost a decade later as Peach Bottom Atomic Power Plant, a General Atomics HTGR located in Pennsylvania.

This closes our examination of the Atoms for Peace initiative. We've seen how the initial vision of getting private industry involved in the design and construction of commercial nuclear plants evolved from mere concept to actual nuclear plants in about as simple a way as is possible to present; much more detail is of course available on each and every step along the way, but the process is important to understand generally. I would like to dedicate this series of articles to the many thousands of men and women who worked through the events portrayed here in the development of civil nuclear power, whose efforts today have begun to dim in the collective memory but not in the mutual beneficial effect. 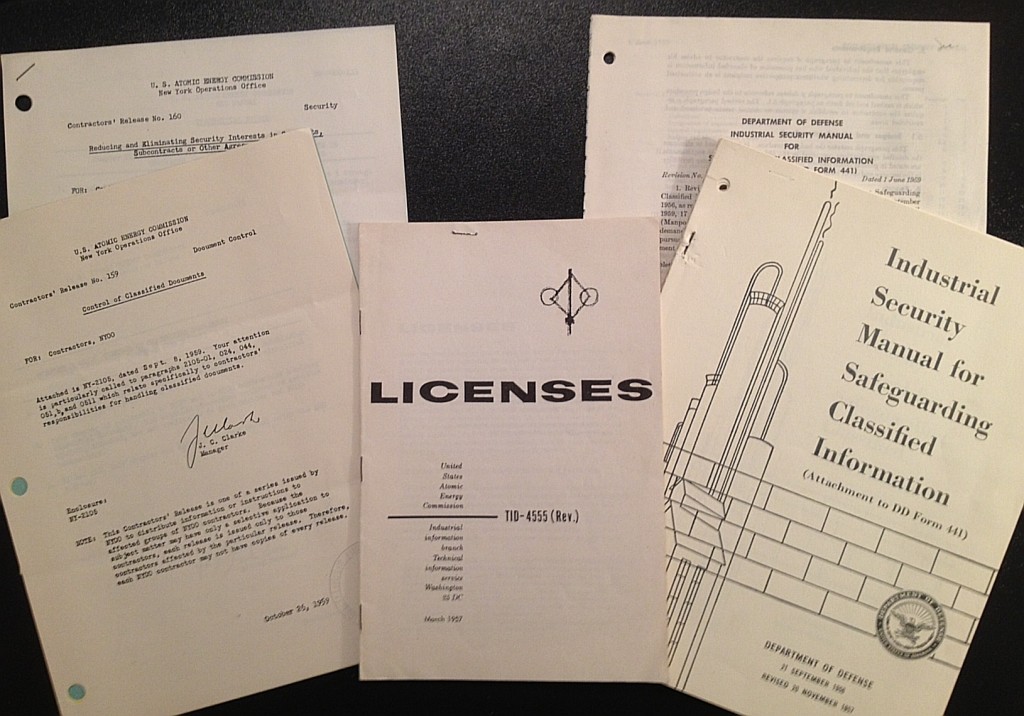 Documents pertaining to CAP and material controls included in files of Sylvania-Corning Nuclear Corp. (SYLCOR). These include periodic AEC Contractor Bulletins, the AEC Industrial Security Manual (and supplement) and various AEC guides. Provisions of the CAP were so extensive that SYLCOR had to revise and reissue its security manual in 1956.

Sources for this article include the following:

Various AEC publications as shown in the article.

Illustrations are entirely from Will Davis' personal collection, or show documents in his collection.

Several of the pioneering plants mentioned above are described in detail in an earlier ANS Nuclear Cafe post by the same author.