Energy-related events in Vermont continue to be a jumble of citizen activism, political maneuvering, changes to the electric power system, and an overall focus on nuclear power.

The Vermont Yankee nuclear plant continues to run well. Among recent developments, plant owner Entergy is reorganizing personnel and is slightly reducing staff systemwide-Vermont Yankee will lose 30 positions by the end of the year, some through retirement. False alarms from refueling floor radiation monitors led to detector replacements. A lawsuit over extra power costs due to cooling tower outages years ago was settled.

The "usual suspects" have, of course, weighed in on the staff reduction at Vermont Yankee. The New England Coalition and Vermont Public Interest Research Group have asked the Vermont Public Service Board, which is considering Vermont Yankee's application for a new Certificate of Public Good needed to continue operation of the plant, to consider the layoffs as a pertinent factor in terms of reliability and economic impact. This, in spite of the fact that the financial capability of a nuclear power plant to operate safely is a matter of the original plant application and continuing license, and that a federal court has ruled that the state of Vermont has intruded on the Nuclear Regulatory Commission's exclusive jurisdiction over nuclear safety. It will be interesting to see if the board takes up this issue, especially since the positions to be eliminated have not been announced.

The SAGE Alliance, for the second consecutive year, is sponsoring a flotilla to travel down the Connecticut River to the Vermont Yankee plant. The event is purportedly to publicize concerns about river warming by the plant. However, that issue is already undergoing a thorough investigation by regulatory agencies. A final decision on a new water discharge permit will come after consideration of the latest science by outside experts working for the Vermont Agency of Natural Resources.

On August 6, the 68th anniversary of the Hiroshima bombing, a small group of repeat protesters once again blocked the Vermont Yankee plant gates, delaying second shift personnel from entering. The protestors were arrested again. The only press coverage was through the group's press release-in the Park Forrest, IL news (per Google search). 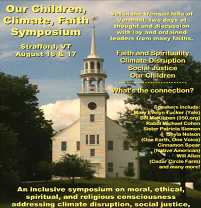 Two climate change events have been organized for mid-month. One of them, Our Children, Climate, Faith Symposium will feature speakers from many religious faiths, and is sponsored by the United Church of Strafford. The event is organized by Jeff Wolfe, a member of that church, and the founder of groSolar, a solar installation company.

The second event, The Rendezvous: Truth, Justice, Culture, Energy, will look at "the thorny, ineffective, policy mess that currently passes for a response to climate change at the state and federal level." It is a "meet-up" sponsored by Mountain Occupiers, a group of conservationists and renewable energy advocates. The event will take place on the family farm of one of the lead organizers.

The 63-MW Lowell Mountain wind farm, recently completed, is not always able to send all of its power to the grid. The problem is described by the grid operator, ISO New England, as "inadequate infrastructure." A $10-million synchronous condenser is under construction. 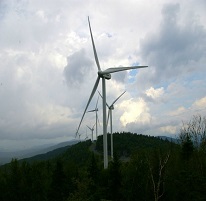 That a major generating project could go into service without adequate transmission seems rather strange, to say the least. What happened and why has not yet been ferreted out. During a recent heat wave affecting Vermont and much of the country, Lowell Mountain's output could not be entirely accepted because of these transmission problems. Thus a slanted word was applied-"curtailed"-as Meredith Angwin discusses at Yes Vermont Yankee. Meredith says "not dispatched" is a more apt description-and perhaps it should be "unable to be dispatched." Vermont's Governor Shumlin sent a letter to ISO New England complaining about the failure to use all available renewable energy during a time of peak demand.

Vermont Yankee recently had some false alarms from the area radiation detectors on the refueling floor. Operators followed procedures, then immediately checked to see if plant conditions revealed the source of the alarms. Everything was normal, so a technician with a portable instrument verified that all was safe. The instruments were replaced, and the manufacturer indicated that there had been problems with these instruments. The state Department of Public Service has sent a letter to the NRC requesting detailed information on the event.

In addition to the transmission connection problems with the Lowell Mountain wind farm, the Vermont Public Service Board will investigate alleged violations of noise restrictions in considering that project's Certificate of Public Good.

There is also an ongoing discussion of the state's Energy Plan, including how much electric power will be needed in the future. The goal is 90 percent renewable sources for all energy used by 2050. "All" includes transportation and building heating as well. With current and foreseeable technologies, this means most personal transportation will need to be electric. This factor alone implies roughly tripling the state's electric power use. A concurrent goal is for these energy sources to be in-state.

The state has programs to encourage renewable energy projects of all kinds. The state's comprehensive energy plan at first allowed only small hydro-electric projects, but when this seemed problematic for the schedule, the legislature allowed prospective and existing large projects to be included-however, the fact that Hydro-Quebec is not exactly in-state does not seem to be an immediate concern.

Some years ago the Vermont legislature created the Vermont State Nuclear Advisory Panel (VSNAP). It is chaired by the commissioner of the Department of Public Service, with members from state agencies, the legislature, and the public. The panel meets periodically on an apparently random schedule. I've never heard or read of it making any recommendations to the legislature. Instead, it seems to serve as a vehicle for members of the public to vent against Vermont Yankee. The panel met on July 17 and heard an hour-long, fact-filled presentation from Entergy engineer Bernard Buteau. The lessons learned from the Fukushima accident and the actions the plant has taken and will take were presented, followed by a grilling of questions by the panel members.

In the recently completed legislative session, a bill was passed to expand the number of people the Red Cross would shelter for an extended period of time due to an evacuation caused by Vermont Yankee. The cost, of course, gets passed to the plant.

The plant itself is operating at full capacity and is legally in a holding pattern. Entergy sued the state over the legislature's preventing the Public Service Board from releasing its findings on a new Certificate of Public Good for the plant. This was a de facto shutdown move, and the plant won in federal district court. This decision was appealed to the circuit court of appeals, and heard in January. A decision is awaited. Meanwhile, the Public Service Board started all over on the Certificate of Public Good, and has concluded the hearings. Final briefs are due soon and the board's schedule calls for completion of its work this fall.

Meanwhile, the power play of this jumble of forces-very much like a "tug of war"-will continue for many years. Climate change will continue to be an issue, as will energy and the Vermont Yankee nuclear power plant.

Howard Shaffer has been an ANS member for 35 years.  He has contributed to ASME and ANS Standards committees, ANS committees, national meeting staffs, and his local section, and was the 2001 ANS Congressional Fellow. He is a former member of the ANS Public Information Committee and consults in nuclear public outreach. He is coordinator for the Vermont Grassroots Project. Shaffer holds a BSEE from Duke University and an MSNE from MIT. He is a regular contributor to the ANS Nuclear Cafe.