The Vermont Yankee nuclear power plant will refuel this spring, probably in March or April. Vermont Yankee's statement announcing the refueling was optimistic about the plant's future. Spokesman Rob Williams:

"We're proceeding business-as-usual and making upgrades where necessary. As we plan this outage our assumption is we're operating until 2032"  (quoted by Terri Hallenbeck in the Burlington Free Press).

The Hallenbeck article also noted: There's been much speculation that the 41-year-old plant's closure might be impending...

This negative speculation about the plant was based on a UBS report that claimed that Vermont Yankee is uneconomical and might well be closed by Entergy. Andrew Stein at Vermont Digger reported on this analysis, and an earlier article by Stein provides a link directly to the UBS report.

I wasn't negative. I thought Vermont Yankee would refuel. As a matter of fact, I posted a blog article titled: Vermont Yankee is Refueling and I Sort of Told You So.

The "I told you so" incident came about a week before Entergy announced that it was refueling. Pat Bradley ( WAMC Plattsburgh NY) interviewed three people, including me. She asked us all about the UBS report, and I was the only one who thought the plant would continue to operate. (A link to the interview is here-it's about three minutes long).

Much of my optimism was a reflection of my knowledge of tendencies in the price of natural gas in this region. We have few pipelines, and when natural gas prices are higher, they force the price of electricity to be high. About a day after I was interviewed, Matt Wald of the New York Times published an article about gas and electricity prices: In New England, a Natural Gas Trap. His article confirmed my statements about gas and electricity prices in this region. Jim Hopf's post on Potential nuclear plant closures and what could be done to stop them at ANS Nuclear Cafe also supported my optimism (the early section on natural gas prices is most relevant to Vermont Yankee).

But there's another reason: I had learned by experience. In other words, in the past, I made a very public mistake. A year and a half ago I made a wrong prediction. I predicted that Vermont Yankee would NOT refuel at that time.  When I predicted this, a federal case about the plant was totally unresolved.

Happily, I was wrong, and Vermont Yankee did refuel. Then, the federal case was resolved a few months later, with the judge ruling for Vermont Yankee. Now it is true that the judge's ruling has been appealed by the state, and also true that the Public Service Board hearings about the plant are still on-going. However, the current situation feels far more positive than it was a year and a half ago. Looking back at that time, I was wrong to be a pessimist.

In other words, this former pessimist has turned into an optimist. And what about those gas prices? A year and a half ago, Vermont natural gas prices were $5.80 per MMCF and trending downward.

More recently, they have been at $5.90 MMCF and trending upward.

On a broader basis (though our prices are mostly pipeline-constrained in the northeast), the rig count is low and the Henry Hub price is trending higher.

These gas prices give reasons to expect higher electricity prices in the Northeast, and therefore a better economic outlook for merchant generators in our area (such as Vermont Yankee).

But I wanted to do more with these statements, to use them to inspire others to speak for nuclear energy and nuclear plants. But how would we do this? Yesterday's blog posts are a bit like yesterday's newspaper: a periodical, and who will go back and read them? So I decided that these pro-Vermont Yankee statements needed to have a better home. In other words, they needed to be in a book. 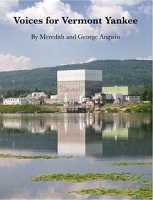 My husband George and I just finished compiling an eBook: Voices for Vermont Yankee (George did most of the work). We finished it about two days ago. It contains the testimony, the pictures, and introductory material. You can buy a copy for $2.99 at Amazon for the Kindle, or at Barnes and Noble for the Nook. You don't need an e-reader to read the book. Free e-reader apps are available for PCs, Macs, Androids, Blackberries, iPhones, and more.

I am sure you will find the combined statements in support of Vermont Yankee, all together in a book, more impressive than scrolling through my blog posts.  Within the book, they are beautifully organized and presented (George's work) and the statements themselves are so powerful. But I am not just writing this to sell the book (though I hope you will buy it). I also have advice to give away, and my advice is free!

My advice to fellow bloggers: Build some eBooks! More pronuclear bloggers could put together eBooks on specific subjects. Let me give one example of why there should be eBooks. If you want to read Isaac Asimov's Robot stories, why leaf through tattered old copies of science fiction magazines? The stories were first published in such magazines, but later they were assembled in a book: I, Robot. It is much easier to buy the book directly.

Perhaps a similar principle sometimes applies to blogs. If there's a subject you have covered in a series of blog posts, you can put an eBook together, and the book will be something you can point to, refer to, or suggest that people buy. "Get the eBook" is far more understandable than telling people that if they go to a blog and search for the keyword "economics" (for example) they will find some interesting stuff.

What are the eBooks in YOUR future?