The Department of Energy announced recently that it would award the first of (potentially) two blocks of grant money for small modular reactor (SMR) development to Babcock & Wilcox, Bechtel Corporation, and the Tennessee Valley Authority. The funds would be used for construction of a new SMR-powered reactor plant at the former Clinch River Breeder Reactor (CRBR) site in Oak Ridge, Tennessee-a site that once shined as the future of nuclear energy in the United States.

Decades ago, the Liquid Metal Fast Breeder Reactor (LMFBR) program, originally begun by the Atomic Energy Commission, turned into a real-world project in 1972 when the AEC signed the first Memorandum of Understanding with TVA, Project Management Corporation, Commonwealth Edison, and Breeder Reactor Corporation -- to build what would become known as the CRBR plant. Work quickly advanced to include a number of reactor vendors (Westinghouse as lead reactor manufacturer, along with General Electric and Atomics International) and a giant consortium of 753 utility companies nationwide, as well as many other vendors and consultants. Project costs  escalated, and in 1977 the Carter administration decided to terminate the licensing activity and attempted to kill the project. The CRBR project went on in semi-limbo for years, with much hardware being constructed. Finally, after a brief attempt in 1983 to find ways to increase outside funding for the project, it was cancelled-with over 70 percent of the equipment either delivered or ordered, site preparation work underway, licensing activity nearly completed, and environmental hearings completed (DOE-NE-0050, March 1983.)

When the breeder project was launched, the liquid metal-cooled breeder reactor seemed very much the path to the future for nuclear energy, in order to close the fuel cycle. Now, the SMR seems the path to the future, to provide industrial power and process steam, even for off-grid use. It's supremely fitting that the Clinch River site-just green field now, but where the "old future" of nuclear energy died-will see the launch of the "new future." In order to help close the historical circle, let's take a look at some of the hardware actually constructed for the CRBR project-but never used. We've already seen the first exterior concept for the plant above; we'll see the final one later on. 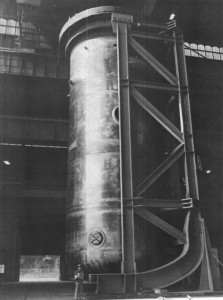 Above, the reactor vessel for the CRBR, pictured at Babcock & Wilcox's facility in Mount Vernon, Indiana, as seen in a Westinghouse CRBR status report from 1981. The special J-shaped rig or mount was designed to both transport and help erect the vessel at the time of installation. Cost of this piece of equipment with core support structure was about $27.7 million. The core support was fabricated by Allis-Chalmers. 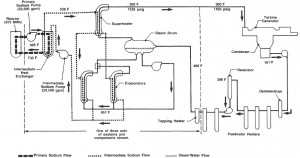 Above, flow diagram for the CRBR-sodium in the primary and intermediate loops (3 double loops total) with steam/water in the conventional manner in the final cycle. The odd-looking shape of the steam generators and superheaters in the diagram is no mistake, as we're about to see. 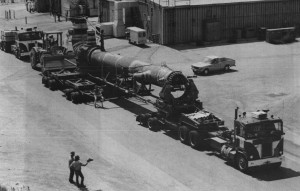 Above, CRBR "evaporator" or steam generator delivered from Atomics International for testing. Both the primary loops and intermediate loops were to use very large electric pumps to move the liquid sodium, which we'll see below. 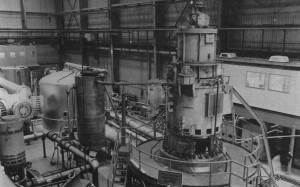 Above, a primary loop sodium pump under test at the Byron Jackson Division of Borg-Warner Corporation, as seen in a Westinghouse update on the CRBR project from 1981 (the same photo is duplicated in the 1982 report). 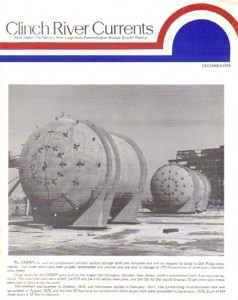 The CRBR project had its own internal newsletter; above, the cover of the December 1978 "Clinch River Currents." Below is the text from the cover:

"The CRBRP's in and ex-containment primary sodium storage tanks are complete and will be shipped by barge to Oak Ridge when needed. The three tanks have been purged, sandblasted and painted and are now in storage at ITO Corporation of Ameriport, Camden, New Jersey.

These tanks for the CRBRP were built at the Joseph Oat Company, Camden, New Jersey, under a subcontract from Atomics International. The materials used were ASME SA-515 and SA-516 carbon steel plate, and SA-105 for the nozzle forgings.  Single piece spun heads were used in fabricating the tanks.

In that same December 1978 issue we find a number of illustrations and details about completion of the in-vessel fuel transfer machine, illustrated below with original caption material included. 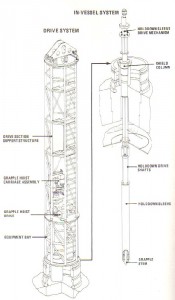 "Four years of design work and over a year of fabrication and assembly by Atomics International Division, Rockwell International, Canoga Park, California, have culminated in completion of the two subassemblies of the in-vessel transfer machine. The next step will be final assembly, followed by an integrated checkout of the unit in air in February. Following completion of this phase, the unit will be turned over to the Energy Technology Engineering Center nearby in Santa Susana, California, for testing in sodium. Turnover is scheduled for May 1979.

The $2.3 million apparatus will be used to transfer fuel inside the reactor vessel during refueling. Mounted on the smallest of three eccentric rotating plugs of the reactor vessel head, it will be capable of locating itself over any removable element of the core, picking it up with a straight pull and transferring it to a temporary storage location inside the reactor vessel. It will also pick up replacement elements from the storage location and place them in the proper position in the core. The triple rotating plug locating concept, also used by West Germany in the SNR 300, is the first such head design used in a US designed LMFBR. Prior rotating head concepts in the US were employed on EBR II [Experimental Breeder Reactor II] and FFTF [Fast Flux Test Facility] but consisted of only two heads and a cantilevered in-vessel fuel handling device..."

Below, the reactor vessel head assembled for testing; the eccentric plugs and gears can clearly be made out. 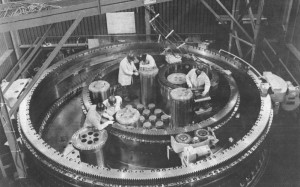 The design layout for the plant changed a number of times as improvements were made. Below, the final layout as found in 1981-1982 Westinghouse status reports, and which was fairly widely released. This was the final plant configuration. 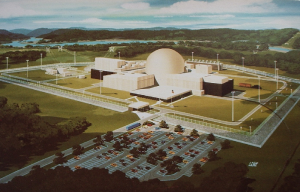 As we have seen, the CRBR was never built. The equipment ordered was laid up or disposed of, and the work force scattered; the site returned to disuse. The promise of a new and different future for nuclear energy never did die, though-it has taken on new faces from time to time since then, none of which has really reached the hardware stage. Now, at last, the Clinch River site will finally see construction and operation of a nuclear power plant, fulfilling its promise. While the design and appearance of the Generation mPower SMR plant will be vastly different from that envisaged for the CRBR, it's fitting that it is because the look of the future of nuclear energy has also changed that much in the intervening quarter century. 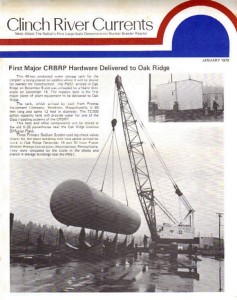