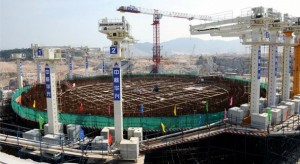 The Chinese State Council has unfrozen approvals of construction of new nuclear reactors after stopping them in 2011 following the Fukushimna crisis in Japan. China will build new reactors at a slower place, however, and only at coastal locations, and only Gen III+ designs. No date has been given for the first new approval decision.

According to the China Daily for October 25, two programs-the national plans for nuclear power security-were approved for the period 2011-2020 at an executive meeting of the State Council chaired by Premier Wen Jiabao. The Council also approved a national energy development program through 2015 that addresses fossil and renewable energy sources.

Nuclear energy expert He Jiankun, at Tsinghua University, said the decision to restart approval of new nuclear reactor construction strikes a balance between increasing energy production and the need to cut greenhouse gas emissions. China is the world's leading emitter of greenhouse gases and is believed to significantly under-report its output of them.

Gen III+ Designs to be built

Sun Qin, chairman of the state-owned China National Nuclear Corp. (CNNC), told wire services in Beijing on November 8 that the publication of new safety guidelines in late October has opened the door to construction of new reactors similar in design to the 1150-MW Westinghouse AP1000.

The changes in policy regarding new starts will reduce completion of new nuclear power generating capacity from 80 GW by 2020 to about 50-60 GW. Even these numbers may be ambitious despite assurances from CNNC.

While Chinese state-owned nuclear energy firms have significant experience building and operating the current fleet of about 12 GWe of nuclear power, all of the units are based on the older CPR1000, Russian VVER, or Canadian CANDU designs. New starts will require learning from the current construction experiences with Gen III+ designs.

The reason that coastal sites have been selected is to facilitate delivery of large components. One of China's challenges for new reactors at inland locations is that it lacks the transportation infrastructure to ship systems like reactor pressure vessels, steam generators, and power turbines long distances over land.

The thaw in approvals of new construction projects will boost employment not only at the sites themselves, but also in China's domestic supply chain. Contracts with Shanghai Electric and Dongfang Electric will resume stepping up manufacturing at their plants.

One of the long term safety issues for China is the variety of reactor designs it will live with for the next 40-60 years. It complicates the nuclear safety regulatory effort. China is still under invested in nuclear safety oversight and regulation.

The Environmental Ministry, which issued the new safety regulations in October, said that the government might phase out older reactor designs sooner. The reason is that they lack the passive safety features of the AP1000 and the EPR.

To get to its goal of 55-58 GWe, it will have to complete a minimum of 15 Gen III+ design reactors. Many of the new Gen III+ units won't be completed by 2020 when the first group of units in the original group of 15 start to be decommissioned. This scenario suggests that coal and other fossil sources, such as natural gas, will continue to dominate China's energy supply as fuel sources.

China Nuclear Engineering Co. (CNEC) announced on November 2 that it is planning the country's second initial public offering (IPO). The firm will issue 525 million shares on the Shanghai Stock Exchange, raising the equivalent of $288 million. The IPO was initially slated to be released in early 2011, but was shelved as a result of the Fukushima crisis in Japan.

The first IPO for new nuclear construction, said to be worth up to $27 billion, was announced by the China National Nuclear Power Co. (CNNP) last June, but it has not yet been released to investors.

Reasons for the first IPO

Andy Mulkerin, managing partner at the Nicobar Group, a consulting firm with offices in Shanghai and New York, said in a statement last June that the CNNC IPO announcement is exciting news for both the Chinese and global nuclear power markets.

"While other Chinese nuclear power manufacturers and uranium mining subsidiaries are already listed in Shanghai and Hong Kong, this IPO represents China's first for a nuclear plant operator and could be China's largest IPO to date," he said.

"Our opinion is that this is a sign of China's continued dedication to nuclear power, despite the delay in new construction starts, and the country's long-term vision that nuclear power will play a major role in fulfilling its growing energy needs. More importantly, it is a milestone event in the beginning of a period where we see more and more Chinese outbound activity in global nuclear markets."

Asked why the IPO is being developed at this time, Mulkerin said that there are several possible considerations contributing to the decision for CNNC's IPO, the strongest of which likely includes international branding and raising capital.

"An IPO will allow CNNC to project more accountability and transparency as they look at more international opportunities. CNNC's IPO may be a way to demonstrate that they are on par with [State Nuclear Power Technology Corp., SNPTC] and [China Guangdong Nuclear Power Group, CGNPC] in terms of their international prowess, as they have lagged behind both since the introduction of 3G plants in China," he said.

Another issue is that during China's long suspension of new starts, the projects that will be funded by the IPO have seen cost escalation. Nicobar's analysts say the IPO should help them to ease the financing of these plants in completing the projects. They also observe that having assured funding will attract the kind of management expertise needed to bring the projects in on time and within budget.

"Secondary reasons for IPO may include attracting and retaining top internationally experienced management, seen in the appointment of Qian Zhimin as general manager, who was formerly at CGNPC, [the World Association of Nuclear Operators, WANO], and [the Nuclear Energy Agency, NEA], and other financial motivations such as facilitating acquisitions and creating various investment opportunities, i.e. convertible debt and equity offerings," Mulkerin said.

No bid for Horizon

The State Nuclear Power Technology Corp. (SNPTC), which is a separate entity from state owned firms authorized to build and operate domestic nuclear power plants, was at one time in talks to invest $10 billion in the United Kingdom's Horizon nuclear power project.

The funds that would have been made available are not associated with the $27 billion IPO announced by CNNC. However, SNPTC did not submit a bid for the Horizon project, which was purchased by Japan's Hitachi Corp. The Chinese firm did not issue a statement explaining why it chose not to bid on the project.

The Fuqing nuclear plant’s Unit 6, one of two Chinese-designed and -developed Hualong One reactors at the site, has entered commercial operation, China National Nuclear Corporation (CNNC)...