On August 16, G. Ivan Maldonado, PhD, Associate Professor of Nuclear Engineering with the University of Tennessee-Knoxville, attended a Tennessee Valley Authority (TVA) Board Meeting on behalf of the American Nuclear Society to present comments on the use the of mixed uranium-plutonium oxide (MOX) fuel technology to accomplish the timely disposition of surplus weapons-grade plutonium.

The American Nuclear Society (ANS) has long regarded the timely disposition of surplus weapons-grade plutonium to be vitally important to national security. In 2001-and again in 2009-ANS endorsed the application of MOX fuel technologies to accomplish this goal. Society members also endorsed the important role that ANS should play in informing the public about the nonproliferation benefits of the MOX fuel program and the safe and successful track record of manufacturing and using MOX fuel.

The ANS Nuclear Cafe caught up with Professor Maldonado to ask him about this experience.

Why did you feel it was important to submit public comments to the TVA Board? 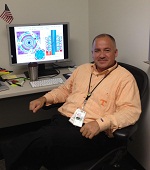 I have attended a few public meetings before.  In particular, I recall a visit to in Piketon, OH, several years ago when the DOE was entertaining the possibility of a collocated recycling/reprocessing facility and a fast reactor somewhere around the US.  So they visited several selected sites to hear the locals and public comments.

My colleagues at the University of Cincinnati (where I worked then); Dr. Henry Spitz and Dr. John Christenson (may he rest in peace), and Professor Rich Denning from Ohio State University joined me to help provide some educated comments on behalf of the positive impact such project would have upon an economically depressed area of Ohio, and also upon universities such as UC and OSU (research, industrial jobs, etc.) all which would benefit the children of Ohio and the surrounding states.

Our positive thinking and the good message we genuinely believed we brought forth seemed to "drown" within a sea of dozens and dozens of out-of-town activists who had apparently mobilized from all points across the US, sometimes driving for several days in large clusters with the sole purpose of "simulating" a public majority that had greatly suffered for years from the evil doings of the US DOE and the nuclear industry.  Each of their stories was more off the wall than the previous one, many of them designed as scare tactics with unfounded data or events that nobody could corroborate or verify.  Most of these individuals obviously had no ties to, or represented, the public interest of the local town or of the State of Ohio, and part of their tactic was to also loudly cheer each other.

In this manner, when I and my colleagues spoke, we were met with sepulchral silence or even a few boos.  I learned that day that these environmental activist groups were simply much more organized and better prepared than any of us were.  I thought that day they accomplished their mission, which was to simulate a mostly anti-nuclear public providing endless stories (rarely documented evidence) and, thus, overwhelming most of the available time for public comments.

I was happy to present a position statement to TVA on behalf of the ANS and was actually proud of the fact that my professional society was making a deliberate effort to mobilize our troops to help our voice be heard.

Could you describe the setting for the TVA Board of Directors meeting?

I thought it was very interesting that the TVA building was surrounded by cop cars and riot/bomb type squads with canine units all over the place.  The entrance to the meeting had a metal detection portal, much like going through airport security.  The registration table had a couple of ladies who checked your name against the list of pre-registered public speakers.  The order of the speakers (your number) was based on when you pre-registered on the Internet.  My number was 29, so I knew I'd be there for a while.

For people who haven't submitted public comments before:  What were the mechanics?

The public comments for the TVA Board meeting were well organized. Speakers were summoned in sets of about 5 individuals at a time. When you started to speak, a clock/timer began to count down your 3 minutes.  The light was green until there was about 1 minute left, then turned yellow.  Finally, it turned red.

I had rehearsed "in my head" while waiting for my turn, timing it with my phone, and quickly learned that my brain talks to itself much faster than when speaking into a microphone!  Three minutes go by very quickly, but I managed to squeeze it all in.

What were some examples of other public comments?

Given that TVA is a large public utility, public concerns extend over a very large footprint of issues surrounding coal, hydro, gas, and nuclear generation, transmission lines & vegetation management.  So during the first 2 hours of the Board meeting, there was one statement against MOX, and two technically-based talks that supported MOX: mine and that by Dr. Thom Mason, the director of Oak Ridge National Laboratory.  So I heard a lot of concerns from the public about presumedly indiscriminate cutting of trees near power lines, particularly affecting the looks of suburban neighborhoods and thus housing prices.  Folks traveled a long way to express their concern with marinas being built and developed in the lakes that serve the TVA dams, etc.

Inevitably, as it was my experience back in Ohio, probably 6 or more years ago, I noticed groups of activists who were present, and their reciprocal cheering & clapping that followed every one of their talks.  Funnily enough, after I spoke... "you could hear a pin drop."