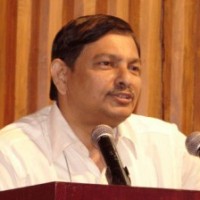 R. Bhattacharya is head of India's Atomic Energy Regulatory Board

In a report to India's Parliament, India's Comptroller and Auditor General (CAG) writes that the Atomic Energy Regulatory Board (AERB) lacks independence, has no power to make safety or radiation protection rules, does not require decommissioning plans for nuclear power plants, nor does it have the authority to enforce safety standards, and does not have a role in responding to nuclear energy facility emergencies.

The far-reaching report is expected to stimulate action by Parliament to reorganize the nuclear safety function within the government.

The CAG said that it prepared the report based on India's plans to expand its reliance on nuclear energy for electricity generation from about 5 GWe to 20 GWe. India's expansion plans include a mix of Russian 1000-MW VVERs, Areva 1600-MW EPRs, and its own 700-MW PHWR design.

The Russians have completed two VVERs at Kudankulam in Tamil Nadu and are in the process of commissioning Unit 1 this week with its first fuel loading. Areva is expected to start work on two EPRs at Jaitapur in Maharashtra by December.

Elsewhere, Nuclear Power Corp India Ltd is moving ahead with plans to build multiple reactors around the country to deal with the nation's crippling energy shortages. In August, two back-to-back power outages lasting several days each denied electricity to over 600 million people.

The CAG said that based on the nation's ambitious plans to build new nuclear power stations, "There is an urgent need for the government to bolster the status of the AERB."

Perhaps more serious is the review of the AERB's overall performance. The CAG says that the agency has been slow to adopt international standards for nuclear safety and has not accepted the need for a peer review by the International Atomic Energy Agency. The report noted that the AERB has no enforcement powers nor the ability to take legal action when it finds safety lapses at nuclear plants.

"The AERB has no direct role in radiological surveillance of nuclear power plants to ensure the safety of workers or in emergency-preparedness," the report said.

The CAG report found that the AERB still has no formally adopted safety policy and that dozens of the safety manuals it was chartered to prepare in 1983 are not complete.

"It is evident that the AERB is on very tenuous ground if it is to be judged in terms of the benchmarks of what is expected from an independent regulator," the report said.

The CAG said that by comparison, many western nations, including the United States and the United Kingdom, have strong independent nuclear safety regulatory agencies.

The CAG warned that unless the functions of the AERB were made independent, and the performance of the agency was brought up to meet International Atomic Energy Agency standards, a nuclear disaster would likely occur at one of India's power stations.

In defense of the agency, AERB Secretary R. Bhattacharya told the Indian news media that while it is true there is no radiation safety policy document, the agency does have "detailed codes and guides on managing radiation."

In 2001, a court decision ordered the AERB to set up a program of control for radioactive materials used in medicine and industry. However, the CAG said in its report that little progress has been made in this area.

In April 2010, a nuclear medicine device containing cobalt-60 was mistakenly sent to a metal scrapyard where one worker was killed from radiation exposure and seven others hospitalized with injuries.

In late August, the 75 member states that belong to the Convention on Nuclear Safety met in Vienna, Austria, to address the aftermath of the Fukushima accident.

IAEA Director General Yukiya Amano said that the convention has made progress in several areas including assessment of safety vulnerabilities of power stations, improving the IAEA's peer review process, and upgrading methods for emergency preparedness and response.

More support is being requested from the IAEA by Vietnam as it plans to build eight new nuclear reactors. Minister of Science and Technology Nguyen Quan said that the country lacks a proper legal framework and has a shortage of trained nuclear engineers to staff an independent safety agency.

The first two reactors are to be built in Ninh Thuan Province by Rosatom, which will supply 1000-MW VVER reactors for the power station.

Electricity from the plants is expected to support development of a domestic finished goods aluminum industry based on the country's bauxite deposits. Thereafter, Vietnam is reportedly in discussions with Japan to build the next two reactors, but no formal contract for them is in place at this time.

The Nuclear Regulatory Commission has issued Interim Staff Guidance to U.S. nuclear power plants to guide implementation of three orders issued in March 2012 based on lessons learned from the Fukushima-Daiichi nuclear accident.

The first order requires reactor operators to have better protection for portable safety equipment. The second order applies only to Mark I or Mark II containment designs. It calls for improved venting systems in the event of an accident. The third order calls for enhanced equipment to monitor the water levels in spent fuel pools.

Reactor operators have until December 2016 to meet all the requirements in the new safety orders.

Daunting tasks are nothing new for Jhansi Kandasamy. Her record of accomplishments over three decades suggests that she is often the first to succeed where others fall short. “I like to be...

India’s Kakrapar-3 nuclear power reactor has achieved criticality for the first time, according to Nuclear Power Corporation of India Limited. The unit reached this latest milestone at 9:36...