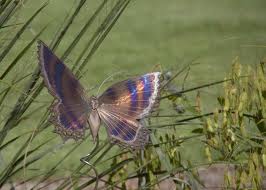 Mothra - a fantastic fantasy creature created in 1961 by Japanese film makers in response to public fears of the radiation effects of atmospheric testing of nuclear weapons in the South Pacific.
Image: http://godzilla.wikia.com/wiki/Mothra

Mothra - a fantastic fantasy creature created in 1961 by Japanese film makers in response to public fears of the radiation effects of atmospheric testing of nuclear weapons in the South Pacific.Image: http://godzilla.wikia.com/wiki/Mothra

Media reports of radiation-induced mutations of butterflies near Fukushima in Japan produced a lot of head scratching over their significance.

Unlike the 1961 Japanese horror film Mothra, a giant, radiation-mutated insect did not destroy Tokyo nor did it do battle with other film fantasy creatures like Godzilla.

Here are three reports from nuclear bloggers which address the "so what" question.

Susan Voss points out some weaknesses in the much-publicized study of damaged butterflies from the Fukushima area. Sample sizes are too small to be analyzed statistically or extrapolated, and it's not clear why the authors of the study chose to emphasize the parameters that they did and ignored others.

Ralph Andersen, NEI's chief health physicist. Here's what he had to say about the study:

"Please note that there are species of plants, insects and animals that are particularly sensitive to changes in environmental conditions, including radiation. The pale grass butterfly is among the most sensitive, which is why it was selected for study following the accident at Fukushima Daiichi."

Butterflies are not human analogs

Radiation was not the only mutagen released in Fukushima by the tsunami. At first Rod was ready to yawn and say, "So what?" The headlines seemed almost tailor-made for tabloids or TV news - "Radiation from Fukushima power plant meltdown 'triggers genetic mutations in butterflies'.

Then he realized that the story had some legs and deserved a response - after taking time to read the full paper and reviewing the reactions of other experts.

Margaret Harding has another installment on the Utility Working Group Conference organized by the American Nuclear Society. This time she reviews a session where Bill Borchardt, EDO of the NRC, presented the NRC's view of the status of the Industry.

Black Start, BlackOut and Diesels: Some Clarity is needed. Intervenors are getting set to intervene against Vermont Yankee acquiring a new diesel because Vernon Dam will no longer be a "black start" plant on the New England grid.  After an initial reaction of "huh?" Meredith Angwin investigates what this means. In this post, she explains the three shades of black: 1) grid blackout, 2) black start, and 3)station blackout. Conclusion: the new diesel should be no big deal.

Why Canada should look at LFTR or DMSR ~ Rick just happens to be rooting for molten salt reactors but there are other reactors that provide process heat for industrial use. Canada is getting pressure to reduce their CO2 emissions. The industry in question is the oil sands of Alberta. If we have to live with it then process heat can reduce the environmental damage. How it does this is thought for another article. The conference July 18/19 in Washington DC features Dr. Tim Birtch, John Kutsch and Bob Prince all discussing their own non LWR methods of of making useful energy in small modular reactors.

Will Davis continues the story of Sylvania-Corning Nuclear Corporation's progress in the late 50's through the eyes of a former employee, using the wonderful collection of papers now here at APR.

Anomalies detected in a reactor vessel at the Doel nuclear power station in Belgium may be tiny cracks, prompting further investigation. Will Davis at the ANS Nuclear Cafe provides background and analysis, and possible significance for other reactors.

Dan Yurman writes that competition for Turkey's second and third nuclear power stations has heated up, but it isn't clear whether any deals will be signed soon. China, South Korea, Japan, Canada, and Russia all want to supply the plants, which are expected to be about three-to-five GWe each depending on how many reactors are built at each site.

The Navy is funding EMC2 (inertial electrostatic fusion project) an additional $5.3 million over next 2 years to work on the problem of pumping electrons into the Polywell. Big new pulsed power supply to support the electron guns (100+A, 10kV). WB-8 has been operating at 0.8 Tesla (8 times stronger magnetic field than any previous version). There was a review done of the work and the recommendations were to continue and expand the effort.

If you have a pro-nuclear energy blog and would like to host an edition of the carnival, please contact Brain Wang at Next Big Future to get on the rotation.