Climate Change and Nuclear Energy: We Need to Talk

During my undergraduate studies in art school, I created a body of artwork about micro-organisms. After taking my two required biology courses, I was completely obsessed with cyano-bacteria and diatoms (they are still a central theme in my home décor). Learning that every cell in my body has mitochondrial RNA identical to these ancient life forms floored me, and made me feel completely connected to the planet and all of the other life on it in a very concrete way. 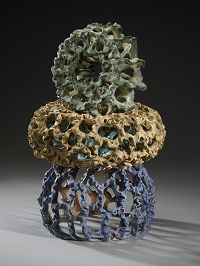 These phytoplankton are not only our actual ancestors -- they absorb CO2 and pump out oxygen, which created a unique environment that gave rise to the variety of oxygen-loving species that exist on our planet today (including humans). I wanted to glorify these little powerhouses and to encourage others to think about how these simple, tiny life forms could create a transformation on a global scale. It's really quite inspiring.

While I was making artistic monuments to single celled organisms in the ceramics studio, new research was emerging about ocean acidification affecting these beautiful and integral pieces of our ecosystem. As the ocean absorbs excess carbon from humans burning fossil fuels, the pH of the ocean is rapidly changing. This means that our ancient oxygen-making pals cannot properly do their job. As their ocean home becomes inhospitable, they are dying off in droves. This not only impacts the ocean's ability to naturally sequester man made carbon emissions; it also negatively impacts the entire food chain, since they are the primary food source for other multi-cellular ocean creatures, some of which we enjoy eating. 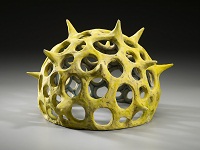 Oh, and did I mention that these little phytoplankton are also responsible for creating the ozone layer that protects all life on the planet from cosmic radiation, and they churn out 70-80% of the oxygen we breathe? These creatures are much more than just a pretty floating form.

Ocean acidification is the issue that brought me to supporting nuclear energy. Ocean acidification is an often-overlooked aspect of climate change that is potentially more threatening than the heat, the super storms, the fires, the drought, the crop losses, and all of the other trends that we are seeing now, which climate scientists have been warning us about for decades.

Climate Change and Nuclear Energy: Like Oil and Water?

It didn't take long for me to find out that in the nuclear industry, climate change is not something we all agree on. Discussing climate change as a concern is often polarizing, and brings up intrinsic conflicts of interest in the larger energy sector (the companies who design/build/run the nuclear plants also happen to design/build/run the fossil fuel plants). I've been advised by people who deeply care about me, and the success of my organization, not to bring up climate at all, and to be extremely careful not to base my support of nuclear on climate issues. I've also been specifically advised not to make the argument that nuclear energy is the only solution to climate change.

When you are the new kid, it is usually best not to make waves if you can help it. So, for the most part, I have heeded that advice and held my tongue, despite myself.

However, as I watch the news (and my wilting vegetable garden) and see the magnitude of human suffering that is directly related to increasingly severe weather events, I cannot keep silent. Climate change is why I am here supporting nuclear energy, so what am I doing not talking about it?

The CEO of Exxon Mobile recently made clear that despite his company's acknowledgement of the irrefutable evidence of climate change, and the huge ecological and human cost, he has no intentions of slowing our fossil fuel consumption. In fact, he goes as far to say that getting fossil fuels to developing nations will save millions of lives. While I agree that we need stronger, better energy infrastructure for our world's poorest nations, I wholly disagree that fossils are the right fit for the job.

Although we are all entitled to our own opinions and beliefs, the idea that climate change and ocean acidification are even up for debate is not reasonable. Just think: The CEO of the largest fossil fuel company in America freely speaks out about climate change, while nuclear energy advocates are pressured to stay silent on the subject.

Silence is No Longer an Option

I am someone who avoids conflict, who seeks consensus in my personal and professional lives, and so I have followed the advice of well-meaning mentors and stayed silent in hopes of preserving a false peace within my pro-nuclear circles, including my family and friends. But my keeping silent is now over- starting here and starting now-because this is too big and too important to stay silent. I am not alone in believing this, and the nuclear industry does itself no favors by tacitly excluding the growing movement of people who are passionate about the need to use nuclear energy to address climate change.

And nuclear power is the only realistic solution. It would be great if there were also other viable solutions that could be easily and quickly embraced; however, the numbers just don't work out. Renewables and conservation may have done more good if we had utilized them on a large scale 40 years ago, when we were warned that our ecosystem was showing signs of damage from fossils fuels...but at this point it's really too late for them. And burning more fossil fuels right now, when we have the technologies and know-how to create a carbon-free energy economy, would be the height of foolishness. 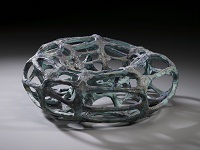 In the meantime, there is real human suffering, and we here in the developed world are directly causing it. Our poorest brothers and sisters cannot escape the heat. They cannot import food when their crops fail. They cannot buy bottled water when there is a drought. They cannot "engineer a solution" any more than my childhood friends the phytoplankton can.

Energy Choices as an Ethical Obligation

We have an ethical obligation to stop killing people with our energy consumption. That statement may sound oversimplified, but let's be honest-we know that fossil fuels kill approximately 1.3 million people each year through respiratory diseases and cancers, and the death toll for climate change related events rises every day. Yet, we do nothing but dither about climate change politics. Where is the outrage?

The fossil fuel industry has been successful at presenting a united front and maintaining consistent strategic communications. In contrast, the safety record and clean energy contributions of nuclear are always overshadowed by politics favoring fossil fuel use. If anything, nuclear advocates should be particularly sensitive that the very same politics are happening with climate science. 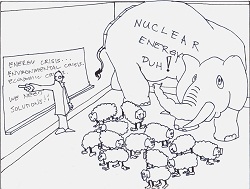 We should be championing nuclear energy as a science-based solution, instead of enforcing a meek code of silence. People from outside the nuclear industry, like Gwyneth Cravens, Barry Brooks and Tom Blees, have pointed out these relationships, yet the nuclear industry has yet to internalize and accept these realities.

How can we expect people to listen to science and not politics when it comes to nuclear energy, but not climate change?

Nuclear Must Lead by Example 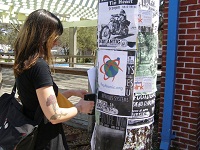 If we want the public to overcome the cognitive dissonance between science and policy when it comes to nuclear energy, we need to lead by example and overcome our own cognitive dissonance when it comes to climate change -- even if it means risking our own interests as members of the larger energy industry. We are not going to run out of fossil fuels any time soon, so the decision to move to carbon-free energy-to move to nuclear energy-must be made willingly, and based on ethical principles, not the limits of our natural resources.

As green groups wait endlessly for renewable technologies to have some kind of breakthrough, and nuclear supporters stay mum on climate change, we continue using fossil fuels. Our collective inaction is allowing the destruction of our planet's ecosystem, the dying of our oceans, and the suffering of the poorest members of our own species. The climate conversation has become so convoluted by politics and greed that many smart, compassionate people have "thrown in the towel." We should be more concerned than ever at our lack of a comprehensive global response.

I strongly believe that there's still time to reclaim the dialogue about climate change based on ocean acidification evidence, and to use nuclear technologies to improve the long-term outcome for our planet and our species. The first step is acknowledging the complicated and unique role of the nuclear industry in this conflict, and the conflicts of interest that are impeding open communication. The second step is to realize that the climate change community is a potential ally, and that openly addressing the subject of climate change in our communications is in the best interest of the nuclear community. The third step is choosing to do the right thing, not just the polite thing, and reclaim our legitimate role in the energy community as the "top dog" of carbon-free electricity, instead of quietly watching natural gas become "the new coal."

Climate change is not going away-it is getting worse-and each one of us in the nuclear community has an ethical obligation to speak up and to do something about it. I am speaking up for the oceans, for the cyano-bacteria and diatoms and our shared mitochondrial RNA that still fills me with wonder at the beauty of this world. Please join me if you can, to speak up for what you love-and if you cannot, please understand that we all remain nuclear advocates, and that the nuclear community is much stronger with the no-longer-silent climate change harbingers in it. 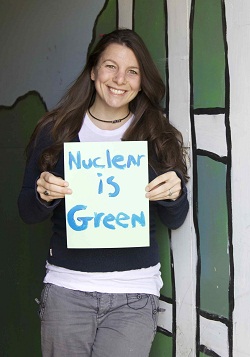