It is certainly exciting times for NASA and the space nuclear community, as physical testing of nuclear thermal rockets (NTRs) and associated components has begun at NASA and the Department of Energy laboratories across the country. Nuclear thermal propulsion, as discussed in a previous article, is just one form of nuclear propulsion with extensive research behind it, and the only form with an extensive testing background. Near-term efforts by NASA will focus on preparation for ground and flight tests of a scalable Nuclear Thermal Rocket around 2020. However, the larger purpose of the recently restarted testing track is to develop an engine for manned travel to an asteroid, and eventually to our neighboring planet, Mars.

This effort to develop a modern NTR suitable for human travel is part of the Exploration Technology Development and Demonstration program, as described in the NASA 2011 budget under the Advanced In-Space Propulsion component. To begin research, NASA will focus on accomplishing five tasks that will need to be completed before ground technology demonstration can begin.

The first of these tasks is conceptual. NASA must gain an understanding of the current standing of NTR technology and determine, in addition to the currently planned work, what needs to be done to advance technology to an acceptable level. This work will guide any physical testing and set the emphasis on which testing should be prioritized to maximize return on research. NASA must gain a full understanding of how a ground testable NTR can scale to one that is flight testable and applicable to manned missions.

Second, NASA will be pursuing a detailed assessment of the in-core materials used in a modern nuclear thermal rocket (see Houts et al NETS 2012). Building on the extensive research done in the 1970s, they will develop new nuclear fuel fabrication systems, and complete extensive testing to select a final form. Currently, the two competing fuels are the NERVA graphite fuel, developed for NTRs in the 1970s, and a more recently developed fuel called tungsten CERMET. In their final form, both are seeded with uranium, allowing for power production when in a reactor configuration. These fuel types are designed to withstand temperatures greater than 2500° Kelvin, as well as all the stresses inherent to launch. For comparison, titanium, a metal with a very high melting temperature, melts at around 2000° Kelvin. To understand the behavior of these fuel types under many conditions, a testing device called the NTR Element Environment Simulator has been constructed at NASA's Marshall Space Flight Center, which can provide non-nuclear test results crucial to fuel development (see Houts et al NETS 2012). 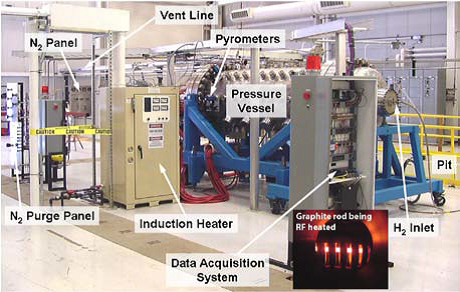 The third task is a conceptual analysis of the nuclear and thermal fluid aspects of a ground testable NTR. This analysis will generate models for design and eventual construction of a NTR, and enable cost savings down the road as most of the conceptual issues will be discovered and corrected before a physical prototype is constructed. Much work has previously been done in this area for a modern nuclear thermal rocket, and the breadth of codes and expertise available is large.

The fourth task for NASA will be the development of their NTR test facility. The method that will be explored is the Subsurface Active Filtration of Exhaust (SAFE) option, which utilizes boreholes drilled at the Nevada Test Site. With the SAFE option, NTR exhaust will be fired into the boreholes, as opposed to open air testing of NTRs, as was done for testing in the 1970s. Because of the low run time of these reactors, the inventory of radioactive fission products is very low; however, the use of the SAFE option will allow greater control of any fission products that are produced and lost in the coolant flow. To begin development of the SAFE testing facility, NASA will conduct hot gas injection tests into the boreholes, which will allow for understanding of the effectiveness of the alluvium (porous rock) to holdup and filter radioactive materials.

The final task that NASA will need to complete will be a conceptual plan for NTR development after ground and flight tests are completed. The purpose of this plan will be to sustain the technology level of the NTR so that the system will remain usable for years to come. By building on the knowledge and experience gained in the previously mentioned tests, the NTR will need to be applied to a mission to remain a viable technology option. This will mean regular use in missions beyond low earth orbit such as moon, asteroid, or Mars missions.

Experimental research in space nuclear technology, such as this current work by NASA, has been very weak for quite some time, and it is good to see it being pursued again (this holds true for any advanced propulsion system, not just nuclear thermal propulsion). In the end, the hope remains that nuclear technology will provide the key for unlocking the solar system for humankind.

Much of the information in this post came from a talk by Dr. Stanley Borowski at the NETS 2012 conference.  Dr. Borowski is a researcher at NASA Glenn Research Center in Ohio.

Wes Deason is a graduate student in nuclear engineering at Oregon State University working on the safety analysis of vented fuel systems for gas-cooled fast breeder reactors. He is a former summer fellow for the Center for Space Nuclear Research and the current student liaison for the Aerospace Nuclear Science and Technology Division of the American Nuclear Society.
Tags:
american nuclear societyspace applications
Share:
LinkedInTwitterFacebookEmail