NRC Public Meeting in Brattleboro: The Politics of Intimidation

A recent public meeting held by the U.S. Nuclear Regulatory Commission (NRC) turned out to be a horrific way for a nuclear supporter to spend an evening. The NRC held the meeting to report its annual review of the Vermont Yankee nuclear power plant's performance. The plant received the highest safety ratings, but that was not the focus of the May 23 meeting in Brattleboro, Vt.-to put it mildly.

I hope I never get that close to a mob-rule situation again. I will be completely honest here. The politics of intimidation at this meeting definitely intimidated me. I have always urged people to "show up at the meeting and stand up for nuclear energy" in my discussions of nuclear activism. I will continue to say and do this, but perhaps more cautiously.

The NRC meeting was divided into two parts. The first session in some ways resembled a "science fair." Attendees could see NRC exhibits and ask questions one-on-one with NRC officials. Vermont Yankee also provided an exhibit, a cut-away model of the plant. This part of the meeting was completely civil. You can see people standing by an NRC table, and standing around and chatting, in this picture: 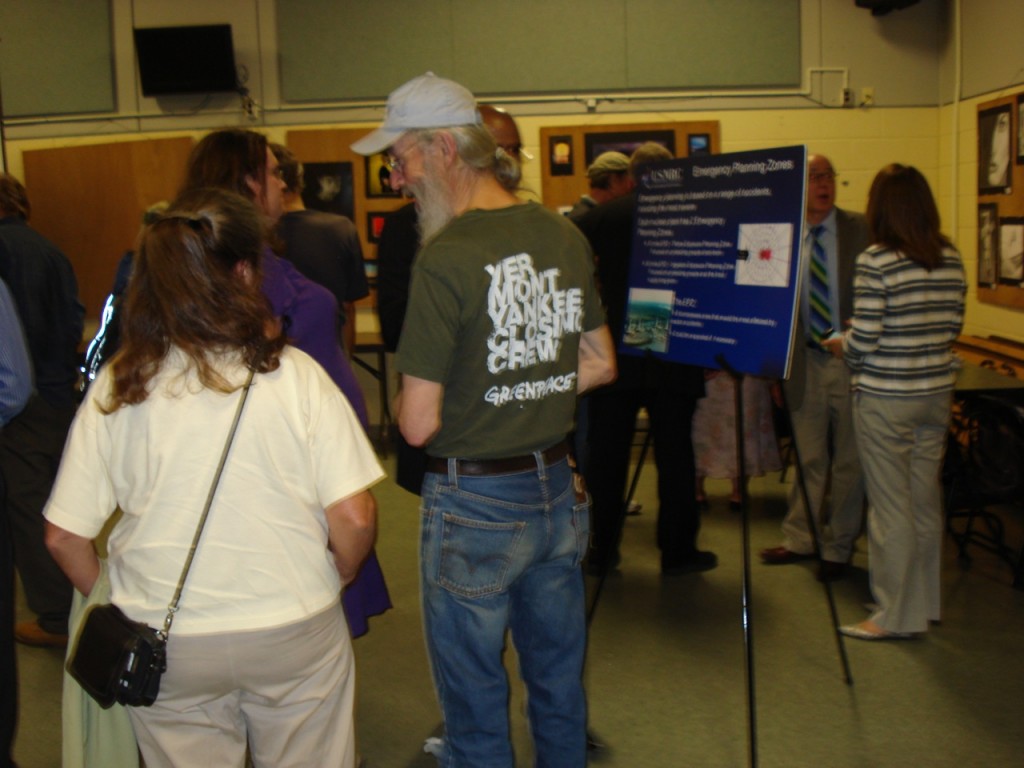 Near the end of this first session, however, a group of women in black, with white death masks, filed into the room and began walking a circuit around it. 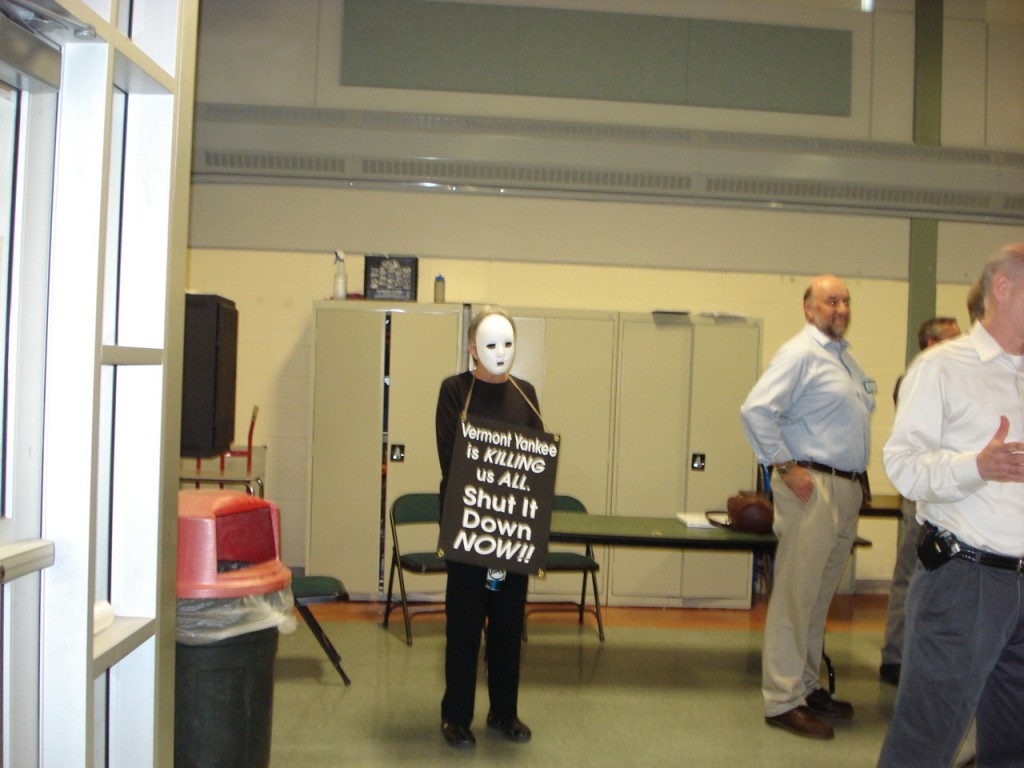 As the NRC attempted to set up tables for the second session, intended to be a more formal meeting with a question-and-answer period, many of the black-dressed women went to the front of the room and stood behind the NRC tables. The NRC moderator asked them to sit down. He said that he wouldn't start the meeting with them standing there, and that standing behind the tables was disrespectful. (You can see the interaction at WCAX "Vermont Yankee hearing turns heated.")

The crowd shouted that those were merely the NRC rules, that this is a democracy, that the women don't have to sit down. Then most of the crowd surged up from their seats to stand near the women. 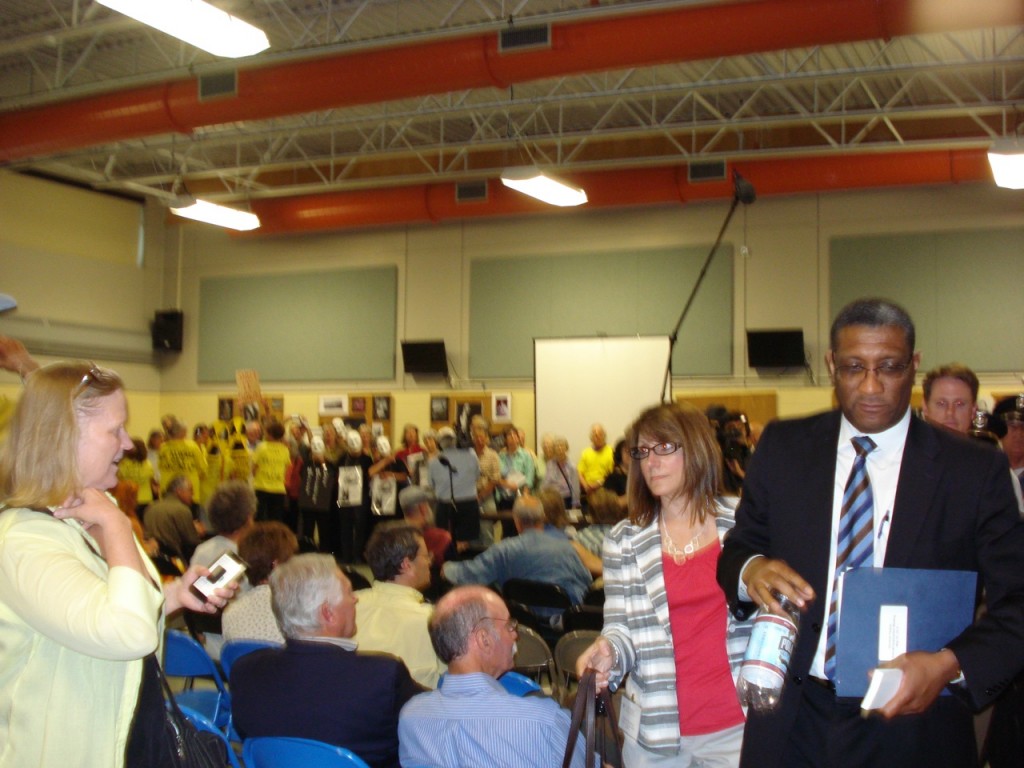 I hope to leave

With the NRC gone from the room, the opponent group had taken over the microphones and were saying anything they wanted and clapping for each other. This was an anti-nuclear rally, with a meeting room thoughtfully provided by the NRC.

I realized I had no earthly reason to be in that room. Maybe it was time for me to leave too. While the NRC was out in the hallway, I became hopeful that the meeting would be cancelled and I could leave. 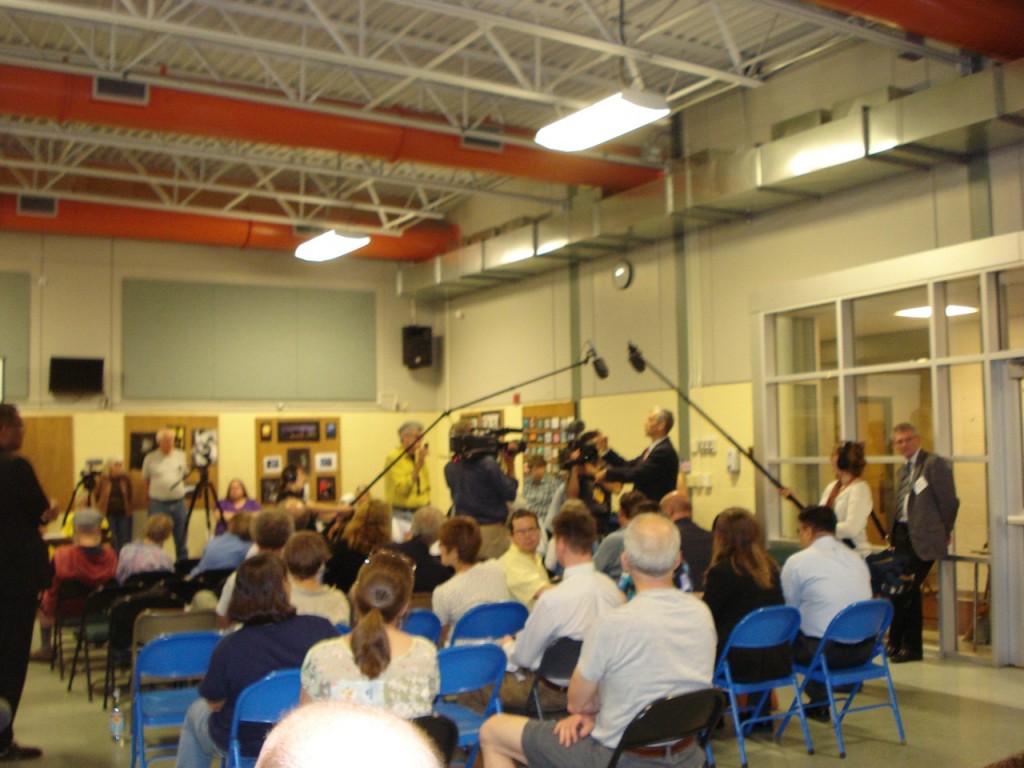 The anti-nuclear crowd was noisy and intimidating. At random-seeming intervals, they started chants. One of the leaders would shout "Mike Check" and the group would echo it. Then the leader would shout a few more lines about the plant, or "This is what democracy looks like!" and the group would echo that. The audience also shouted, whistled, and rang bells to show approval for one of their speakers, or disapproval for an NRC official, or for the sole brave pro-nuclear speaker.

The questions and statements of the opponents were the usual. NRC is an industry lapdog, there is strontium in the fish, etc. The final query was what could the people at the meeting say that would get the NRC to shut down the plant. Karl Farrar answered, "That's not the way the system works." With that response, the anti-nuclear leaders declared that "the people" were leaving. There was a final burst of chanting, and most of the audience walked out.

Was it worth it to attend?

Yes and no. During the "science fair" session of the meeting, I had a friendly talk with Mike Mulligan, a Vermont Yankee opponent. Mulligan frequently comments on my blog Yes Vermont Yankee. Howard Shaffer also spoke with several plant opponents at that time. I saw several pro-nuclear people whom I like a lot (but they left early-and I do not blame them!). I was interviewed by a local TV station (it's in the video clip above) and also a radio station. So for those reasons, it was worthwhile to attend.

I have been to many meetings dominated by nuclear energy opponents, but in general the meetings have been civil enough that I felt my presence counted for something. My feeling about this meeting is different. My presence at the formal meeting did not count, and I had no chance to stand up and speak during the entire meeting. A Keene Sentinel article said this about the one man who did speak up:

"One man spoke in favor of the plant, but was shouted down by other audience members."

I still encourage people to go to public meetings and show support for nuclear energy. Most public meetings are not like this one, thankfully. On the other hand, after this meeting, I would also suggest that you keep your eyes open. "Bail out" if you think things might get ugly. Many of my friends left early. There's no shame in deciding to get out.

I put a link to the WCAX video on the Save Vermont Yankee Facebook page. Here's what one man wrote in response. I think I will end this post with his words:

"It's strange I did not see anyone arrested in the video. It's almost at the level of a lynch mob, which is where this type of activity appears to be escalating. You should be careful around mobs like this. They can be very dangerous and things could get ugly quickly."