Since March 22 of this year, the Vermont Yankee nuclear power plant has been operating via a 20-year license extension granted by the Nuclear Regulatory Commission. The State of Vermont has been barred from attempting to shut down the plant by federal court injunctions. Nonetheless, the follies surrounding the plant continue, with all stakeholders participating: the legal system, the legislature, plant supporters, and plant opponents.

Entergy Vermont Yankee's suit against the State of Vermont, which was found in Entergy's favor, has been appealed to the Second Circuit Court of Appeals in New York. Briefs are due next month. This suit involves federal authority versus "States Rights." It is generally expected that it will be appealed to the Supreme Court. That might mean a decision at the end of the court's 2013-2014 term, in the spring of 2014.

The NRC has been sued for improperly issuing a license renewal to the Vermont Yankee plant, on the grounds that the NRC does not have a valid water quality permit from the state. Such permits are issued by states under federal law. The plant and the NRC maintain that they do have a valid permit: the one originally issued. The commissioner of the Vermont Department of Public Service, a lawyer, argued the state's case on May 9.

The Vermont Public Service Board (not to be confused with the Department of Public Service) that regulates state utilities has decided to start all over on Vermont Yankee's application for a Certificate of Public Good. The board recently held a conference of the parties to get all the issues on the table. The conference also discussed the option of starting all over by opening a new docket, or scrubbing the existing docket of issues struck down by the court when it found in the plant's favor. A new docket has been opened. A prehearing conference was held, and the board just issued the schedule for proceedings. There will be public hearings in November, followed by sessions with testimony, rebuttal etc. Final briefs will be due August 26, 2013. A decision would follow, and could take months.

Plant opponents held a rally at the plant offices, 10 miles from the plant, attended by more than 1000 people on the first day of the plant's extended NRC license. Non-violence training had been held, and 130 protestors were arrested for trespassing. The state's attorney for the county refused once again to take them to court, opting to not waste court time to provide the trespassers with a forum. The rally and arrests provided plenty of media coverage.

A small group of grandmothers was again in court for blocking the plant's gate. They acted the day after hurricane Irene did major damage in the state, while first responders were busy. Their action on that day was not popular. Their case was scheduled for trial later. It will be interesting to see what happens. (The "Grannies" have claimed that radiation permanently damages the gene pool, a discredited and dangerous argument from the early Eugenics movement-see Yes Vermont Yankee articles here and here.)

Vermont's citizen legislature recently adjourned after its annual four-month session. The legislature passed a new tax on Vermont Yankee to make up for revenue lost when agreements based on plant purchase and used fuel storage expired. The agreements ended when the state's Certificate of Public Good (CPG) expired on the same day as the original NRC license. Under state law, an expired CPG remains in effect if renewal proceedings are in progress, which they are. Commentators were quick to point out that the legislature and governor may not like Vermont Yankee, but they don't mind the revenue it provides them.

The governor has been lampooned for his comments on the legislature's action on a proposed merger of two electric utilities in the state. One of the utilities was in financial difficulty some years ago, and it was allowed to raise rates to be bailed out. A provision of the agreement was that if the utility were ever sold, the ratepayers and stockholders would be refunded the bailout money.

Now it is proposed to sell the utility for the merger, and the ratepayers are expecting checks for their refunds. The utilities suggest "refunding" the money in the form of energy and money saving investments, claiming that the ratepayers will ultimately save much more than they would gain from direct cash. Many are angry, and the AARP organization has run ads blasting the "non-refund."

The legislature proposed a bill to order the Public Service Board to require a direct cash refund as part of the merger agreement, which they are reviewing and must approve. The governor wrote to the legislature saying that they should not interfere with the board, because it is the legal body that oversees utilities. Many quickly pointed out that interfering with the board was precisely what the legislature did during Vermont Yankee's CPG renewal, which led to the federal lawsuit. The governor never objected to that (Yes Vermont Yankee has the details.)

We continue our public outreach at every opportunity. Meredith Angwin's "Yes Vermont Yankee" blog and our "Save Vermont Yankee" Facebook page keep on inspiring supporters.

On April 28, there was a book signing in Keene, N.H., with the author of "Public Meltdown," Prof. Richard Watts from the University of Vermont. Cheryl Twaorg, whose husband is a senior reactor operator at the Vermont Yankee plant, and Richard Schmidt were there. No opponents showed up, which was surprising, since Antioch New England University, a hotbed of opposition, is in Keene.

Richard Schmidt was on a two-hour radio panel with Meredith Angwin in North Hampton, Mass. The topic was the Vermont Yankee power struggle.

The Union of Concerned Scientists' (UCS) David Lochbaum appeared at two Massachusetts events on successive nights. The first night was at Plymouth on a panel sponsored by the Freeze Pilgrim group (that is, Freeze relicensing until all Fukushima fixes are done). Russell Gocht, a graduate student at UMass Lowell, represented nuclear power and plant supporters (American Nuclear Society Northeastern Section member Chuck Adey had lined him up at a recent section meeting). The next night, UCS had a panel at the Massachusetts Institute of Technology. Nuclear supporters and students attended. Steve Stamm provided a report. We had encouraged attendance at these events by providing notification and details.

Our flow of letters to newspapers hasn't stopped. There are continually issues on the whole spectrum of energy policy and technology that provide a springboard for comment.

Plant opponents have not "laid down their sword and shields" either. The Fukushima tragedy has provided grist for them to keep up the attack on the MK I containment design, and bring back an old German study on childhood leukemia around nuclear power plants. A letter promoting the study appeared in the Valley News, and another supporter and I had rebuttals published.

The Vermont Yankee opponents and anti-nuclear groups have allied with the Occupy movement. They held a rally where 130 people were arrested. A nuclear supporter took a picture of a sign showing the linkage. No picture of this sign appeared in the media. 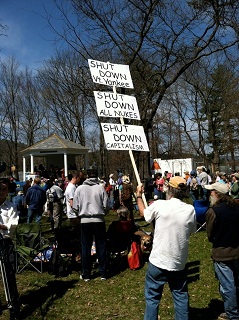