Nuclear thermal propulsion (NTP) involves the direct heating and expulsion of a propellant using nuclear power. To accomplish this, nuclear thermal rockets (NTRs) normally consist of three components: a propellant tank, a nuclear power generator, and a nozzle. As in nuclear electric rocket systems, the component that sets various NTRs apart is the type of nuclear generator used. Most systems that have been designed and tested have used a nuclear reactor to provide heat, while some others have examined the concept of radioisotope power. In the end, the determining factor for which nuclear power generator type should be used is the purpose for which the system was designed. If a nuclear thermal rocket is intended to power a mission to Mars or beyond, a nuclear reactor is a necessity as a power source.

The concept of the nuclear thermal rocket was first developed in the 1950s as a solution for safe and reliable travel to Mars. The research program subsequently developed in the late 1950s and 1960s was unprecedented for space nuclear technology. Through the program, many NTRs were designed, built, and tested. The test site for these systems was Jackass Flats, a location adjacent to what is now the Nevada National Security Site, which lies about 65 miles northwest of Las Vegas.

Famous tests in the program included PHOEBUS 2A, the most powerful nuclear reactor ever to be operated, and NRX-A2, a reactor that was purposefully placed under a very fast power transient to prove its safety. Later NTRs were designed with a specific application in mind, as they were considered for the eventual final stage for the famous Saturn V rocket. Unfortunately, funding for the NTRs, and even the Saturn V rocket, eventually vanished due to a change in the nation's priorities after the Apollo lunar landings. Despite this change, the program is today considered a technical success, as the tests showed that a system could be safely built and operated. 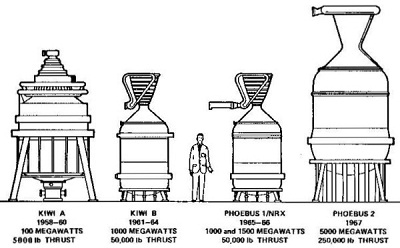 But why choose nuclear thermal rockets-and nuclear propulsion in general-over chemical propulsion technology, which has been used for carrying payload from earth to space for over 50 years? The answer lies in the tremendous energy density present in nuclear power, and its inherent flexibility in application. NTRs are able to heat any propellant that is pushed through its core, unlike chemical rockets that must rely on the combustion of propellant for energy transfer. Because of this feature, NTRs can heat and expel the most efficient propellant possible, which is hydrogen gas, allowing for a large reduction in the overall mass that must be carried from earth's surface to orbit.

In addition, all nuclear propulsion methods are inherently capable of providing long-term electricity production. Bimodal NTRs (BNTRs) can accomplish this by coupling a dynamic power conversion system to the reactor system. These systems are designed to run an additional coolant through selected channels in the reactor core, spinning a turbine, and producing electricity. Unlike solar power, nuclear power can operate independent of its location and orientation in space, providing electricity for energy intensive life support systems and scientific equipment.

Humanity's route to the solar system

Wes Deason is a graduate student in nuclear engineering at Oregon State University working on the safety analysis of vented fuel systems for gas-cooled fast breeder reactors. He is a former summer fellow for the Center for Space Nuclear Research and the current student liaison for the Aerospace Nuclear Science and Technology Division of the American Nuclear Society.
Tags:
american nuclear societyspace applications
Share:
LinkedInTwitterFacebook