At a recent conference I had the pleasure of meeting Kallie Metzger, a young nuclear engineering Ph.D. candidate from the University of South Carolina. Kallie and I quickly discovered that we have a great deal in common, especially when it comes to our shared passion for art and science. Kallie was kind enough to share her undergraduate thesis with me, and I found it to be so unique and contemporary that I had to share it here. In her own words, here is the inspiration of a young physics student who chose to express her passion for science through art. 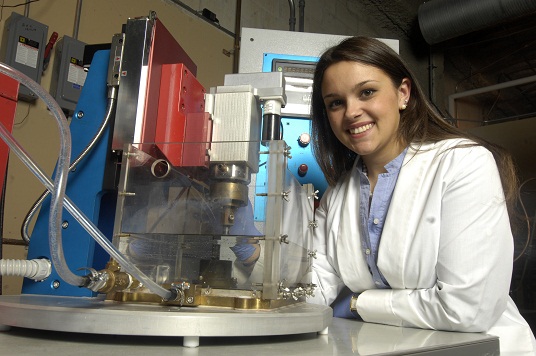 Kallie Metzger, Ph.D. candidate in nuclear engineering at the University of South Carolina

"Modern physics is a field that is as complex as it is beautiful. While taking a quantum mechanics class, I encountered a field of physics that was unlike anything I had comprehended in my studies up until that point. It was abstract and intriguing. The following summer I worked at a nuclear reactor in Mainz, Germany, and came to appreciate modern physics even more. From the brilliance of the blue Cherenkov radiation to the enormity and power of the particle colliders and accelerators at Darmstadt, I was completely in awe. Too often physics is dismissed as complex, intimidating, and even boring. The aim of my senior thesis was to dispel these misconceptions through art," Metzger said. 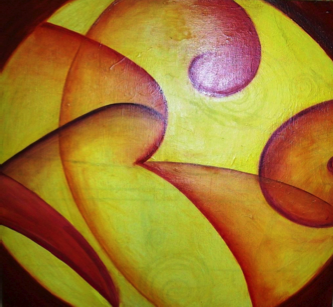 Bubble Chamber I - oil on canvas

"An interdisciplinary art exhibition allows individuals from all walks of life to experience and learn about physics in a lecture-free format," Metzger continued. "At the thesis defense/art exhibition, brochures were available to clarify physics terminology and to enhance the viewer's understanding of the relationship between physics and art. I have always enjoyed art, however my physics major rarely provided me the opportunity to take superfluous classes outside the physics curriculum. For my honors thesis I created a series of 13 paintings that pay homage to the elegance of modern physics. 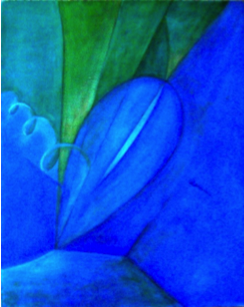 "I believe that in order to create a work of art I have to feel inspired by my subject. I find such inspiration in particle and nuclear physics. Many paintings in the series have tranquil, serene blue colors. This is my tribute to the Cherenkov radiation I was able to observe while initiating a pulse at the reactor at the Institute for Thermal Chemistry in Mainz, Germany, last summer. I was enamored with the beauty of the pulse and knew I wanted to incorporate it in some way into my subject matter." 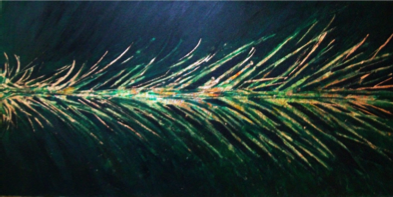 "The body of work may seem to contain two separate subjects, however particle physics and galaxies have more in common than you may think," she added. "I became interested in particle physics during an undergraduate research lab, where I recorded the counts of muons at different altitudes. I was shocked to learn that varieties of particles fall on the earth's atmosphere and can pass through buildings and the human body in a given second. Research into the 'cosmic background' led me to its origins: Our sun and the far reaches of the galaxy." 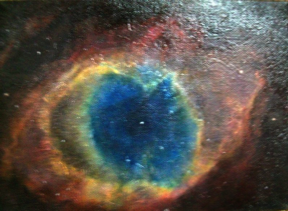 I recently spoke with Kallie about her experience of using art to express scientific concepts. She told me, "Art can be used as a tool for accommodating people. It's much less intimidating to look at a piece of art than to read a technical summary." And for those in scientific fields, Kallie discovered that art can help people from technical walks of life "view their field in a different light." 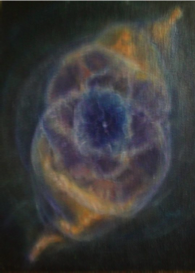 Beyond the art itself, there is a great deal of value in the relationships and community building that resulted from Kallie's senior thesis. Kallie had never attempted oil painting before taking on this project, and sought the support of an advisor from the University of South Carolina art department to help her navigate the process. The result was an exhibit that drew viewers both from the art and science backgrounds. At the exhibit opening, Kallie described an exchange of ideas between the two groups: Science students describing particle physics to art students, and art students being inspired by new concepts.

Reaching a new audience in their language, on their turf is an outreach strategy that is as effective as it is innovative, and something we in the nuclear industry should continue to strive toward. Thank you, Kallie, for sharing your inspiring story!

Suzy Hobbs Baker is the executive director of PopAtomic Studios, a non-profit organization dedicated to using the power of visual and liberal arts to enrich the discussion on nuclear energy. Hobbs Baker is an ANS member and a frequent contributor to ANS Nuclear Cafe