On February 11, 1939, a Letter to the Editor titled "Disintegration of Uranium by Neutrons: a New Type of Nuclear Reaction" appeared in the science journal Nature. The letter provided the first theoretical explanation for the splitting of the atom, and coined a new term in physics: fission. The woman who co-authored the letter, and co-discovered the power of nuclear energy, is perhaps not quite as well-known as some of her contemporaries. Elise Meitner-how could hers not be a household name? 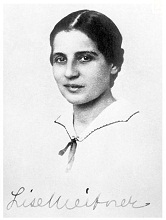 Meitner was born November 7, 1878, the third of eight children in a Jewish family in Vienna, Austria. Although she excelled in math and science, at that time and place girls did not attend school past the age of 14. Lise's parents, however, made sure that their daughters received the same education as their sons, through private tutors. After studying for years to gain entrance at the University of Vienna, Meitner eventually became only the second woman to earn a PhD in physics there.

A battle for the ultimate truth 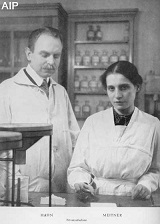 Meitner's nephew, Otto Robert Frisch, said that Meitner's university teacher, Ludwig Boltzmann, "gave her the vision of physics as a battle for the ultimate truth, a vision she never lost." Meitner was one of the true nuclear pioneers-her career spanned from virtually the discovery of radioactivity, through to her own co-discovery of nuclear fission, and well beyond. A few years after earning her PhD in 1905 ,she met the research partner that she would work with for 30 years, Otto Hahn, and soon they discovered several new isotopes. In 1917, the duo discovered the first long-lived isotope of the new element protactinium, and in 1922 she discovered the cause for electron emissions from surfaces known as the Auger Effect. From 1924 to 1934, the Hahn-Meitner team became well-known internationally as scientific researchers of the first rank, and were nominated for the Nobel Prize for 10 consecutive years.

A search for new elements 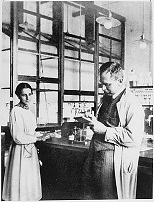 In the 1930s, researchers began to speculate that elements even heavier than uranium-at that time the heaviest known element in nature-might be possible. Such a discovery and achievement would be a sure-fire Nobel Prize winner, and many of the top scientists in the world endeavored to create the hypothetical new element. Hahn and Meitner collaborated in much research toward this end, but history intervened.

Meitner converted from Judaism to Christianity in 1908, but in Hitler's Reich that counted for nothing. Bigotry, racism, and prejudice were translated into government policy by Hitler, and Germany's takeover of Austria in 1938 brought Austrians like Meitner under German law. She barely escaped with her life, with the help of scientists both within and outside the Reich. But Meitner continued to exchange letters almost daily with her research partner Hahn, who was still inside Germany. But Hahn snuck out of Germany to meet with Meitner to discuss new experiments. Hahn was a brilliant, methodical, and precise chemist, while Meitner was a brilliant theorist attempting to puzzle out his laboratory results. It was a perfect scientific partnership.

At their secret meeting in 1938, Meitner urged Hahn and his laboratory partner Strassman to perform additional tests on neutron-bombarded uranium. Hahn and Strassman finally determined that the end 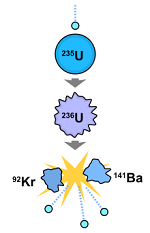 result included the much lighter element barium, not the expected heavy element radium. This was very puzzling. Hahn recognized that uranium atoms completely breaking apart into much smaller atoms would be an explanation, but how could that happen? Hahn wrote to Meitner: "Perhaps you can come up with some sort of fantastic explanation. We knew ourselves that [uranium] can't actually burst apart into [barium]."

Meitner and her nephew Otto Frisch, while outdoors skiing, realized Bohr's "liquid-drop" model of the atomic nucleus could explain the result mathematically. They scribbled formulas on a scrap of paper in the woods:  A

uranium atom could elongate when bombarded by neutrons, and occasionally some of the uranium atoms could split apart into two "smaller drops." In fact, the uranium atoms in Hahn's experiments had split to form the much lighter atoms barium and krypton, and ejected neutrons and a very large amount of energy, with a loss of some mass. Meitner was the first to realize Einstein's famous equation E=mc2 was at play here, converting mass into energy.

The most deserving scientist never to win a Noble Prize

Hahn published his chemical evidence for fission without listing Meitner as a co-author-understandable, as he was in Hitler's version of Germany and she was of Jewish heritage. Hahn, however, continued to maintain that he was the sole discoverer of fission, through accepting the Nobel Prize in 1944 and for the rest of his life. Meitner's explanation for this was that Hahn was "simply suppressing the past (in Nazi Germany). I am part of his suppressed past."

Although not a Nobel-winner, Meitner was quite famous enough for U.S. President Truman in 1946 to quip, "So, you're the little lady who got us into all of this!" Meitner and Hahn had little idea that their basic research would turn out to be useful in making weapons of awesome destructive force, however. When asked to join the Manhattan Project in 1943, she replied, "I will have nothing to do with a bomb!"

Instead of a Nobel Prize, Meitner has been honored with an even more enduring legacy: Element 109 is named meitnerium in her honor.

And since today is Valentine's Day, allow me to close with a quote from Meitner: "Science makes people reach selflessly for truth and objectivity; it teaches people to accept reality, with wonder and admiration, not to mention the deep awe and joy that the natural order of things brings to the true scientist."  To this author, this reads like a love letter to the universe! Lovely, indeed.

Paul Bowersox is a regular contributor to the ANS Nuclear Cafe, and quite privileged to have the opportunity to write about the work of the nuclear pioneers.