On March 21, 2011, the Nuclear Regulatory Commission issued a renewal of the operating license for the Vermont Yankee nuclear power plant for an additional 20 years. Vermont Yankee's original license would have expired on March 21, 2012, and its state-issued Certificate of Public Good does expire on that date. Most commentators agree that March 21 will not be the last day the plant operates, but the date does give opponents a focal point, and they are planning some kind of civil disobedience on that day. The question remains: Who are "they"?

"They" are pretty much the same players who have been opposing the plant all along, but they are reorganizing themselves into new groups to make their movement look as if it has many new supporters. One "new" organization is the "Safe and Green Energy (SAGE) Alliance." Its website urges non-violent civil disobedience, as was used by the Civil Rights movement of the past, and often holds meetings in local churches as well. This "new" group lists many of the same supporters as other opponent groups. In addition, they continue letter writing and press releases. They seize on every small event at the plant to try to "keep the pot boiling." An example is a letter concerning tritium release, "A Big Deal," which has been in all the local papers.

We have affinity groups too. The American Nuclear Society's Public Information Committee has been supporting the Vermont Pilot Project, which works in tandem with the Energy Education Project of the Ethan Allen Institute, to support the continued operation of the Vermont Yankee plant. We have a letter-writing group, too.

A film and panel

Following a viewing of the film "Transparent Radiation" and participation on a panel, described in the December 7 blog article "Transparent Radiation-A Film," Meredith Angwin conducted a back-and-forth e-mail discussion of several rounds with the film's producer and an engineer from the Gund Institute. In our discussion in the hallway after the panel, the producer related that the film was made to express a certain point of view. In one of the last e-mails, she revealed that she was "freaked out" by the Fukushima accident, and then initiated the film project. The engineer was clear that he thinks we don't need coal or nuclear power generation. As noted in the article, panel member Dr. Todd was frightened by the Three Mile Island accident, and he and his wife have been opposed to nuclear power since then. We have learned through this and other outreach contacts that some of the staunchest opponents of nuclear power were frightened by some event that they cannot forget. This continues to motivate them.

The Gund Institute is a professional group opposed to nuclear power that has university support. We reach out to groups like this. The e-mail exchange showed that Gund is repeating charges that opponents have been hurling around for years. It seems that the charges are made without reflection, which may be due to a lack of time and to Gund's entry into a new field. For example, the issue of subsidies for nuclear power is raised, without, it seems, considering that other technologies are subsidized and supported by government enabling mechanisms, and why this continues to be government policy.

On New Years Eve, a "new" group held a rally at the gates of the Vermont Yankee plant, to "ring in a nuclear free new year." The group is Nuclear Free Monadnock, meant to be a New Hampshire voice in support of the opposition. Mount Monadnock is in the southwestern corner of New Hampshire, not far from the plant, and that area of the state is known locally as the Monadnock region. 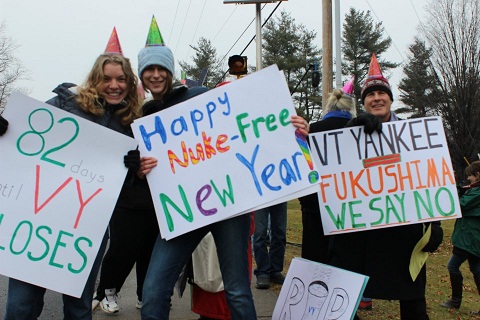 On its website, the SAGE Alliance encourages supporters to form "affinity groups." This is obviously one of them, since a founder of Nuclear Free Monadnock is none other than last year's petition coordinator for the Safe and Green Campaign. SAGE's petition sought political support from all the towns and cities in the 20-mile area surrounding the plant for a tri-state decommissioning oversight panel. The stated purpose of the panel was to provide citizen participation and assure a safe decommissioning. Its real purpose is to give nuclear power a black eye in any way possible. For decommissioning, that means demanding unreasonably low radiation levels for decontamination, thereby increasing costs. A professor at the college who inspired the group has been an activist since being exposed years ago to violence against civil rights movement protesters. We have learned that a common tactic is to form many groups, giving the appearance of broad public support. Closer examination, however, reveals just "the usual suspects." The idea is to have the various groups work in concert, using whichever group and name is most advantageous for a particular situation.

Meredith described our visit to the Four Rivers Charter School's high school class, in Greenfield, Mass., in the blog article "Young People and Nuclear Power." The school is just south of the Vermont state line in the Connecticut River Valley, well within the hotbed of opposition to Vermont Yankee. We were told that an anti-nuclear activist had visited the school by invitation (as had we), and undoubtedly the students heard all the charges levied against nuclear power. The students, however, had also visited the simulator at Vermont Yankee and asked questions of plant staff who had volunteered to speak to them. The students had considered the opponent's charges, and done some research. As Meredith noted in the blog post, they were far more positive toward nuclear energy than the Gund students were. This shows that outreach works, but it can't be a one-time effort, particularly when the opponents keep up a drumbeat of negativism.

A positive outside voice

Greenpeace founder Patrick Moore, who left Greenpeace because its board was beginning to make decisions that were ridiculous from a scientific point of view, has been to Vermont several times recently. He comes to advise the Vermont Energy Partnership, and is in favor of nuclear power and Vermont Yankee. He was in Vermont again in October, and was interviewed by Vermont Business Magazine. A tape of the hour-long interview is linked in the article above and is a valuable resource. For example, Moore reports that Germany is building coal-fired plants to replace its nuclear plants.

A great deal of useful information can be gathered by reaching out to nuclear opposition groups, and understanding where opponents are coming from, including their history, strategy, and upcoming plans, which can inform more effective outreach from pro-nuclear groups.

It will be an interesting spring in Vermont!

Howard Shaffer has been an ANS member for 35 years.  He has contributed to ASME and ANS Standards committees, ANS committees, national meeting staffs, and his local section, and was the 2001 ANS Congressional Fellow.  He is a current member of the ANS Public Information Committee and consults in nuclear public outreach.  He is coordinator for the Vermont Pilot Project.  Shaffer holds a BSEE from Duke University and an MSNE from MIT.  He is a regular contributor to the ANS Nuclear Cafe.