Argonne West at the Idaho National Laboratory on the Arco desert

Anyone who thinks the Integral Fast Reactor (IFR) died in the 1990s needs to think again. At a panel on Tuesday, November 1, at the ANS Winter Meeting, a group of senior scientists and engineers who have worked on the technology gathered to assess the results of more than two years of work. Their task was to look at the databases about the IFR and determine what gaps exist that would need to be closed to license a sodium cooled fast reactor in the United States.

This is not an academic exercise, as there are multiple commercial efforts to build small modular fast nuclear reactors for sale in this country and overseas. The work group assembled information on the state of knowledge about safety analysis for licensing issues such as leaks, fires, and other events under various scenarios including loss of external power and seismic events. 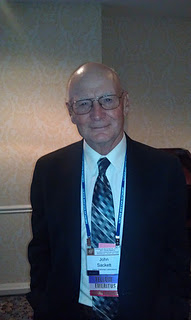 John Sackett, who was a manager for the IFR at the Idaho National Laboratory, said that the objective is to find gaps relative to the licensing process. Mike Corradini, one of the members of the team, said that, for instance, one of the areas of concern is how reactor systems would respond if there was damage to the primary heat exchange loop when using a CO2 based super critical system.

Sackett said that the interest in sodium cooled fast reactors is based on their passive safety features.

"What we know now is that there are no technical gaps that would preclude a licensing application if using known technology. Gaps might arise if a developer chooses to use a new fuel which would need testing. That process could be completed faster if simulation and modeling tools could be brought to bear on the problem," said Sackett.

Sackett also said that most of the people who worked on the IFR are at or beyond retirement age.

"There is a risk that first-hand knowledge of the data about the technology will be lost," he said.

Another challenge is that quality assurance information for existing databases about the IFR would need to be reviewed to include it in a licensing review.

So, who wants to build one? Sackett noted there are four leading developers-Terrapower, Toshiba, General Electric, and the ARC100.

Leon Walters, who worked with Sackett on the IFR as the fuels manager, said that the ARC100 is being looked at by Morocco for possible use to power reverse-osmosis desalinization plants.

A licensing engineer from the Nuclear Regulatory Commission sitting in on the session noted that General Electric submitted a licensing plan for its PRISM technology, but that there is no active review of that plan nor of any other non-LWR technology at the agency at this time. Executives from GE briefed Congress on the technology in June 2009.

Last June, a spokesman for Terrapower told the New York Times that the company was talking with potential partners to build a prototype in multiple countries, but that it had no plans to license the design in the United States.

For copies of the reports on the IFR gap analysis work, contact:

Senior Member of the Technical Staff,