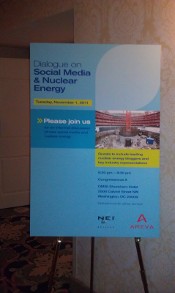 Getting the message out about nuclear energy using blogs, Twitter, and other forms of social media drew an enthusiastic crowd on Tuesday night, November 1. In a session co-sponsored by the American Nuclear Society, the Nuclear Energy Institute, and Areva, the group held a round table discussion about using social media tools to communicate with the public, thought and opinion leaders, and the news media.

It is not just the same online stuff you read about in USA Today. There are exciting new developments coming on tablets and real time interactive video on the web.

Curtis Roberts, who now leads the social media work for Areva in the United States, told the group, "We are committed to using social media to shape the conversation about nuclear energy."

Jarrett Adams from Areva showed off a social media application for mobile devices that will be released soon and handed out a printed sheet of QR codes to help people access all forms of Areva's social media online and sources of information via smart phones.

Eric McErlain, who is the senior manager at NEI for social media, said that the power of social media is in distributed networks of people who do not let anti-nuclear nonsense go unanswered.

"Use social media to get in there and make yourself heard," McErlain said.

The round robin discussion that took place over the next 90 minutes covered a lot of topics. Here are a few highlights.

Lars Hanson, a member of the ANS social media listserv, raised the topic of commenting online when the mainstream media publishes articles that contain inaccurate information. Numerous suggestions were offered about how to use the comment fields effectively to get accurate information across about nuclear science and engineering topics.

Margaret Harding, a former General Electric nuclear energy executive with more than three decades of experience in the area of nuclear fuels, suggested that people read the book Don't Be Such a Scientist.

"In 1997, marine biologist Randy Olson recognized that scientists needed better communications skills to address a growing backlash against 'rational data-based science.' Inspired by the 'power of video,' Olson gave up a tenured professorship and went to Hollywood to reach a broader audience through filmmaking. The crucial lesson he learned was how to tell a good story, a largely absent concern for scientists, who focus on accuracy rather than audience engagement."

Dave Pointer, the chairman of the ANS Public Information Committee, told the group that ANS plans to do more projects like the recent webinar with the NRC, which had an interactive component through the Internet.

Art Wharton, who is working on the new ANS Strategic Plan, said that the use of social media will continue to play a role in future society outreach to the public, the news media, and K-12 education.

This was the fourth social media meet up held at ANS national meetings.  The conversation continues online at the ANS social media listserv and the ANS Nuclear Cafe blog. For more information, contact Laura Scheele, ANS manager of Policy & Communication, via email:  lscheele [at] ans.org

The COVID-19 pandemic hit the United States on a wide basis in March of this year, and life as we knew it changed. “Social distancing” and “essential workers” entered the jargon and...

You know the old saying that those who can, do, and those who can’t, teach? Well, I say anyone thinking that way should be kept far away from students!In my time at Argonne National...

We have dedicated this month’s edition of Nuclear News to university programs and their contributions in advancing the field of applied nuclear science and technology and readying the next...

The Nuclear Engineering Department Heads Organization (NEDHO) is an alliance of the heads (chairs) of about 30 nuclear engineering schools, departments, and programs in the United States....

In a blog post to the Department of Energy’s website on November 23, Rita Baranwal, assistant secretary for the Office of Nuclear Energy, commended recent virtual lesson projects from the...