The first two parts of this series (here and here) presented historical trends in electricity generation in California, and the growing use of in-state natural gas and imports of electricity from grids in neighboring states. They also showed that the use of "Unbundled Renewable Energy Credits" could meet the 33 percent renewable portfolio on paper, but may not benefit consumers in California with actual delivery of electricity.

Since writing those two parts, I have become aware of a presentation on the impact of intermittent renewables on California's distribution system (CAISO-California Independent System Operator) given by Clyde Loutan at a CAISO workshop. In his presentation, Loutan showed the projected capacity addition used in a 2006 CAISO study to meet the 33-percent portfolio:

This table is interesting because my previous articles indicated that biomass and geothermal sources are not expected to expand significantly. Yet the above table indicates that California expects to expand these two sources by a factor of two or more. These two sources would not present intermittency problems on the grid, but whether or not this can be done by 2020 remains to be seen. 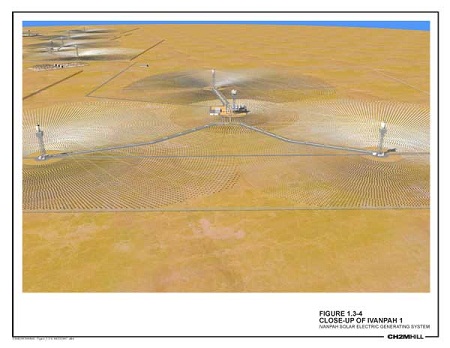 Whether California will meet its solar capacity projection also remains to be seen. The large solar projects, like all energy projects, face environmental permit challenges as evidenced by the recent suspension of construction at the Ivanpah Solar Electric Generating System project due to the impact on the desert tortoise.

Using the projected capacity data in the above table, and assuming that the capacity factor of wind and solar photo voltaic (PV) is 25 percent and 15 percent, respectively, the electricity generation projection for wind and solar PV can be plotted along with historical trends. These plots are the same plots previously present in Part I of this article, but extended to 2020 to show the projection. 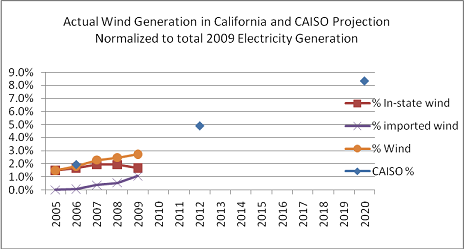 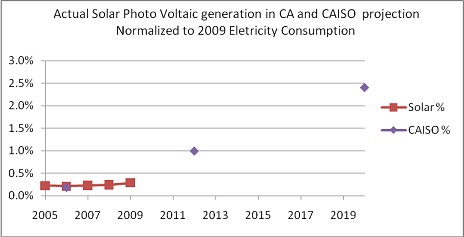 The CAISO study indicated that one of the biggest problems with placing that much intermittent electricity on the grid is that other power sources with rapid ramp rates (up and down) are needed to compensate for the intermittency. A direct quote from the workshop is: "Ramp rates for CAISO generating assets today may not meet the grid's needs once the wind and solar generating facilities required to meet the 2020 33-percent [Renewables Portfolio Standard] are up and running." In other words, the intermittent sources can be built, but they may not be able to be used. This would be rather pointless.

Note that the ramp rate requirement is independent of any improvements to the grid. Even for a most modern grid, power sources with rapid response rates still need to be available to compensate for the fluctuations of wind and solar because electricity basically cannot be stored. The generating asset with the most rapid ramp response rate is hydro. This works well at the Bonneville Power Administration, with ample hydro, but may not help California much, with less available hydro. 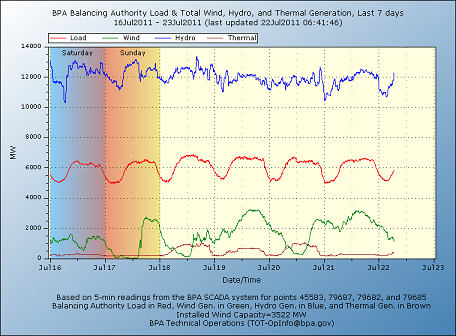 The 13.5 percent intermittency mentioned above is an average over a year. In order to determine the capacity requirement to achieve this generation, one needs to divide by the capacity factor for each source. Assuming a capacity factor of 25 percent for wind and 15 percent for solar, the wind capacity must be 32 percent (8.1 percent/.25) and the solar capacity must be 36 percent (5.4 percent/.15).  The total intermittent capacity is 68 percent of the average yearly generation. 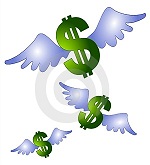 So, on a particular day, if the wind is blowing and the sun is shining, the intermittent sources could, in theory, generate a major portion of the power on the grid. Because, however, of the rapid variability of wind and solar (on partly cloudy days, for example), experience shows that 20 percent is a more realistic limit. So, the California plan overestimates the amount of intermittent sources that can be placed on the grid by a factor of more than three. What will happen to the investments of all the solar power plants that have been approved in California when they find out that their electricity cannot be placed on the grid?

Thou shall balance the grid

It is the responsibility of the distribution system to maintain this balance continuously 24/7. Increased use of intermittent power sources makes maintaining this balance more difficult. We know that this balance is maintained today, because the electricity delivered to our houses does not vary significantly in voltage and frequency. If the distribution system failed to do this, we would know it very quickly, as the lights and appliances would fail to operate properly.

Where will California's renewable portfolio be in 2020? In my opinion, the generation will fall significantly short of the 33-percent goal that has been legislated. Too much of the goal relies on intermittent sources that cannot be fully accommodated on the grid.

Although there is no limit to the amount of intermittent power sources (such as wind turbines) that can be built and connected to the grid, there is a limit to the amount of their generated electricity that can actually be used. If that limit is exceeded, the wind turbines need to be idle even though the wind may be blowing. This would reduce their capacity factor from the currently achievable value of about 25 percent to perhaps as low as 10 percent (depending on how many are built). At several million dollars per wind turbine, this does not seem to be a particularly wise energy plan, particularly in today's economy in California.