The economics of wind power

It is often stated that since no one can charge money for the wind, wind-generated electricity is free. This is not true. A modern wind turbine, which can generate 2 megawatts of electricity (MWe) when the wind is blowing, costs about $3.5 million installed. Five hundred of these turbines installed at a wind farm, to be able to generate 1000 MWe, would cost $1.75 billion. Add in other costs, such as for operation and maintenance (O&M) and transmission lines, and the total sum could match the approximate $4 billion required to build a nuclear plant.

All of these costs need to be recovered from customers or taxpayers. So, the cost of wind-generated electricity is not free. A typical wind farm would generate electricity about 30 percent of the time, and not necessarily at times when electricity is needed. There is a very big difference between intermittent sources of electricity, such as wind farms, and baseload sources, such as nuclear power. The argument that nuclear power also has down times is true, but these refueling and maintenance outages are largely planned during times of low electricity demand (during spring and fall).

As I mentioned in Fitting Wind onto the Electricity Grid, my recent ANS Nuclear Cafe post, wind turbines by themselves do not add electrical capacity to a grid. They must be paired with other generators of equivalent power to compensate for wind variations and for the stability of the  electricity grid.

This pairing-wind and backup-has limits because of the huge rapid variability of wind that must be compensated for by the backup power source. It is estimated that this pairing can account for only 20 percent of the capacity of the grid. This means that wind can be only 6 percent of the generation (.20 x .3). This limit has already been reached in Europe by countries such as Germany and Denmark.

Since wind power is a fuel saver, one of the questions that might be asked is exactly how much fuel is saved, or put another way: What is the economic tradeoff between wind farms and the fuel saved, such as in a natural gas power plant?

A simplified comparison shows that the worth of the natural gas saved is less than the cost of building and operating a wind farm. The details of the cost tradeoff are shown at the end of this article.

There are some additional costs that make the comparison even worse:

An illustration of how the pairing of wind and natural gas has failed recently due to economics was provided by T. Boone Pickens, when he tried to send wind-generated electricity from Texas, which he called the "Saudi Arabia of wind", to California. His attempt at promoting natural gas by pairing it with wind seemed like a good idea and got much television advertisement (his emphasis was on the wind portion of the pairing, as it seemed a more popular idea). His strategy, however, depended on gas prices at $9 per million BTU. The price has since dropped to $4 per million BTU.

Another question that might be asked is how does this tradeoff compare when the electricity is generated with oil? In Hawaii, oil is the major fuel for electricity generation. Another favorable factor in Hawaii may also be that the wind generation capacity factor may be higher on these islands. A simplified cost tradeoff shows that there is indeed a cost advantage to backing up oil generation with windmills. Oil is such an expensive fuel that anything that reduces fuel consumption is well worth the cost.

The fact that oil is so expensive is the reason that it is seldom used in the continental United States for electricity generation. In Hawaii, however, there appear to be few other choices. This may change if small nuclear plants become available as a low-cost alternative.

It should be noted that if hydro power is used to compensate for wind power, there is no compensating cost saving for the saved fuel. The saved fuel is the extra water that goes over the spillway and is wasted. It is cheaper to have no wind farms in this pairing and let hydro do the entire job of supplying the needed electricity. Here are some factors that limit wind generation on a hydro grid:

concern in California, as that state is negotiating with the neighboring Bonneville Power Administration (BPA) grid for renewable energy credits to meet its self-imposed Renewable Energy Standard. In order for the BPA to help meet California's demand for wind-generated energy, it might need to decrease the hydro generation to the point that the excess water flow over the dams causes harmful effects to migrating salmon during the spawning season due to excess dissolved nitrogen [2]. 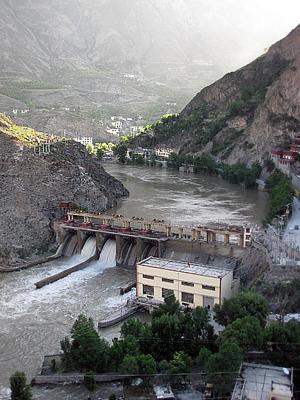 If there is no cost advantage or environmental advantage to placing wind on a grid with ample hydro, one may well ask why we are doing that. The answer is that we have passed laws in many states (Washington and California, for example) that do not count existing hydro into the legal definition of renewable energy. This may be surprising to many readers, as existing hydro certainly fits the definition of being naturally replenished. Existing hydro is certainly replenished as well as new hydro would be.

The BPA grid currently has 3000 MW of potential wind energy (when the wind is blowing). Assuming the above-mentioned price of a windmill, this means that consumers at the BPA have already spent at least $5 billion for wind-energy production without any obvious benefit. This potential wind capacity is expected to double by 2012, so BPA consumers are expected to spend another $5 billion without an obvious benefit.

The bottom line is that we have allowed laws to be passed that are harmful both to our pocketbooks and to the environment. Without the benefit of these laws, wind developers would have lost their legally mandated status and there would be no windmills on grids with ample hydro.

There is no free lunch

This is similar to the electricity generated by hydro. The cost of the water is zero, but the hydro-generated electricity is not zero. It includes O&M costs and the cost of building the hydroelectric dam.

For power providers that use oil as fuel, it appears that wind generation is worth the fuel-cost savings.  Oil is not used extensively, however, because it is so expensive.

In conclusion, there appears to be no economic justification for building windmills except when low-cost alternatives are not available. This is especially true when windmills are placed on a grid with ample hydro, as there are no compensating fuel savings in that situation.

There is no free lunch.

Cost of oil saved in Hawaii:

Madam Secretary: Congratulations on becoming America’s 16th secretary of energy! Welcome to one of the most misunderstood, confounding, yet important and underappreciated agencies in the...

Within the European Union, recognizing nuclear energy as green, sustainable, and worthy of investment depends on nuclear being added to the EU taxonomy of “sustainable investments that have...