Fitting wind onto the electricity grid 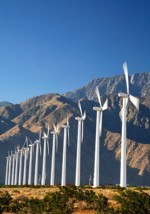 Wind turbines are now a politically popular way for generating emission-free electricity for the grid. There are now windmills operating in many parts of the United States and more of them are proposed.

There are advantages and disadvantages to any method of providing electricity. I will attempt to provide a short summary of the pros and cons associated with placing wind generation on the grid. In order to do that, it is first necessary to understand the function of the electricity grid.

The grid is not an electricity storage device. Some advertisements make the analogy to the grid being like a bathtub filling up with water from various types of faucets. This analogy is completely false, because electricity basically cannot be stored, but needs to be used as it is generated. Except for a small amount of pumped hydro power on some grids, there is virtually no storage capacity.

One reason to have a grid is to smooth out the peaking loads that are demanded by users. For a typical home, for example, the peak to average power demanded may be as high as 20. This means that if a home owner wants to be independent of the grid, the power capability of his generator must be 20 times higher than his average use. There are many homes that now have emergency generators for backup. The generators, however, typically do not service all of the loads in a home and, when grid power is available, are not run continuously due to the cost.

The power produced by the plants on the grid must be equal to the load demand plus the line losses. In order to keep line losses to a minimum, the generators should be located relatively near the users (within a few hundred miles).

Control of the grid power

The electricity grid must be able to provide all the power needed by the users without damaging or melting the power lines. Electricity flowing through the transmission lines generates heat. The longer the distance between the generator and the user, the more of the electricity is wasted to heating the air.

Controllers of the grid strive to maintain a constant 60 cycles per second frequency. Increases in the demand tend to reduce the frequency, and power must be increased to compensate. The power demand is monitored about every five  seconds and power is adjusted as needed.

There are daily and seasonal load swings on a typical grid. The plot below shows the load swing during the day of the all-time peak for the New England power grid. The total capacity of that grid at that time was 33 GW. 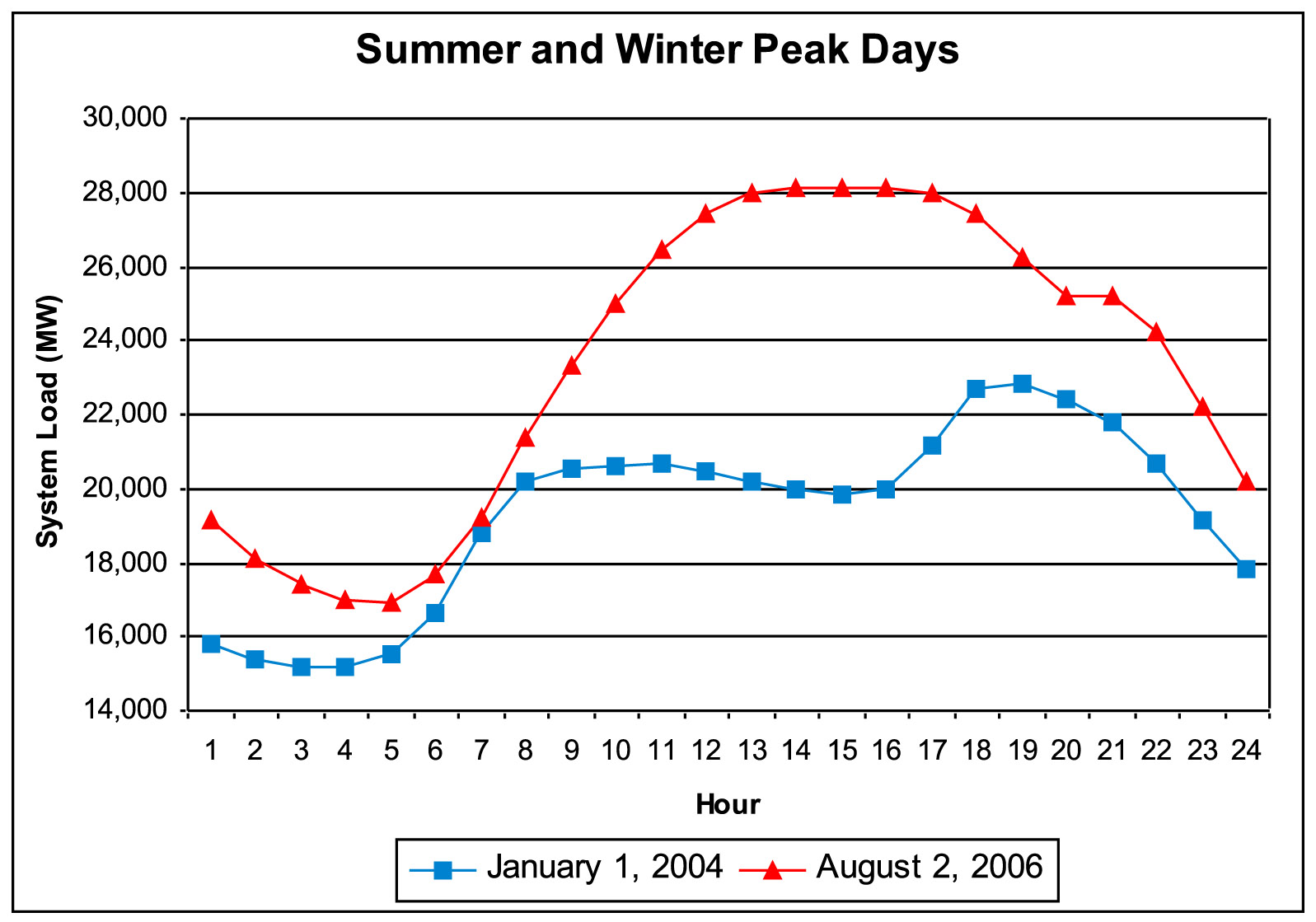 In order to assure a constant availability of electricity, a grid needs to be protected against the sudden loss of any power plant. This can occur, for a wind farm, if the wind speed increases beyond acceptable limits. The sudden loss of wind power must be accommodated by the rest of the power plants connected to the grid. They must be available with a spinning reserve to provide this backup power when needed. Of course, this is true for the loss of any type of power plant. But a wind increase may occur suddenly over a large area and shut off all the wind power connected to the grid.

Hydro electric plants and natural gas plants can respond fairly quickly to the sudden loss of another power plant, but as more  wind farms are added to the grid, the problem of grid stability gets more severe. Grid stability, therefore, limits the amount of wind energy that can be accommodated by the grid (to roughly 15 percent).

Disadvantage 1 for use of windmills on the grid: Adding windmills decreases the grid stability, and this limits the amount of wind energy that a grid can accommodate.

Power sources on the grid

According to the U. S. Energy Information Administration, the production of electricity according to fuel type in the United States in 2009 was:

Typically, coal and nuclear generators are used for baseload capacity, but the choice depends on availability and cost. Those with low cost are run continuously.

In Hawaii, oil is the only choice (included in the "Other" above) and is therefore run continuously. This is the reason that Hawaii has the highest electricity rates in the United States.

Wind turbines are neither baseload generators nor peaking load generators. In order to match the maximum load of the grid, generators need to be able to be turned on. So, we get to the second disadvantage of windmills for use on a grid.

Comparisons are often made of how many windmills it would take to eliminate the need for a conventional power plant. These comparisons are totally meaningless because windmills do not add any megawatts to the grid when the wind is not blowing. Windmills must be paired with some other power plant or energy storage device (such as pumped hydro storage) to add capacity to the grid.

A good way to illustrate how windmills fit on a grid is to show an example of where it has already been done. The Bonneville Power Administration provides such an example.

The BPA link shows the power generated in nearly real-time (updated every five minutes). It shows the generated electricity for hydro, thermal, and wind, and also shows the total BPA system load. The thermal generators are those that use steam to turn a turbine. This would include the Columbia Station (nuclear) and others that are fossil fired. Notice that on the graph on the link, there are periods (many days) when the wind is not blowing and the windmill farms do not produce any power. This frequently occurs during the peak daily load. Windmills, therefore, cannot be relied on to help during the peak load.

Hydro is able to accommodate rapid wind power variations, which makes the pairing of wind and hydro workable on the grid. BPA has ample hydro power that is exported to neighboring grids.

During periods of excess water flow, reducing the hydro power to accommodate the wind simply causes more water to go over the spillway. Both wind and hydro are emission free. There is, therefore, no emission benefit to forcing the wind power on to a grid with ample hydro. It is only during periods of drought that wind power can reduce to hydro head loss.

Disadvantage 3: The pairing of wind with hydro has no emission benefit during periods of excess water flow (the current situation at BPA).

Advantage 1: The pairing of wind with hydro during periods of drought can reduce the rate of hydro head loss and therefore the need for fossil power to make up for the lack of hydro.

Most other grids do not have an abundance of hydro, and adding wind requires a pairing of wind with natural gas. If the grid already has natural gas plants, some wind energy can be accommodated, thus reducing carbon dioxide emissions. There is, however, a limit, and adding more wind energy actually requires the construction of more natural gas plants. The latter is not emission free, compared with building nuclear plants.

Disadvantage 4: If pairing wind and natural gas is used for future capacity, it will increase emissions compared with other sources, such as emission-free nuclear.

Advantage 2: The pairing of wind with natural gas can reduce the fuel used by existing natural gas plants (by about 1/3), thus reducing the emission in this pairing.

The pairing of wind with natural gas is envisioned by some in the natural gas camp as a replacement for baseload generation. California appears to be following this path, as there are plans to expand the state's Tehachapi wind farm and back it up with a natural gas plant of equivalent power capability.

Although there are some advantages to adding windmills to the grid, these advantages are not generally stated to justify them. The common justification that wind power is emission free and that using more of it will have an environmental benefit is actually not true. When we look at how wind power is accommodated on a real grid such as by BPA, there is very little, if any, environmental benefit. Other grids that have less hydro require adding natural gas plants, such as those proposed for California, and are therefore not emission free.

Windmills can save some fuel, but the main challenge of grid operation is to supply enough capacity to meet the peak load, rather than to save fuel. Windmills do not help overcome this challenge. This is independent of how many windmills are built. Doubling or tripling the number of windmills does not help if the wind is not blowing. The hope that wind-generated power will always be able to meet the peak from some far away wind farm is not reasonable because of transmission losses. The Northeast, for example, does not benefit from the abundance of hydro in the Northwest.

The reasons for having windmills on the grid are not very convincing when looking at both the advantages and the disadvantages.  The reason that there are so many wind turbines  in the United States and elsewhere is primarily due to environmental politics. It is a measure of the strength of the environmental lobby. It is a forced market created by politics, not by economics or real environmental needs.

Around the world, national and local policymakers and business leaders are making bold and ambitious commitments to clean energy goals. In the United States, one in three Americans now lives...

Energy Secretary Jennifer Granholm on Wednesday during the CERAWeek energy conference commented that Texas should look beyond its borders to join other grids following last month's winter...

In the September issue of Nuclear News, I asked if you’ve ever wondered why nuclear isn’t commonly considered the choice for clean power production. In that column and in August’s, I...